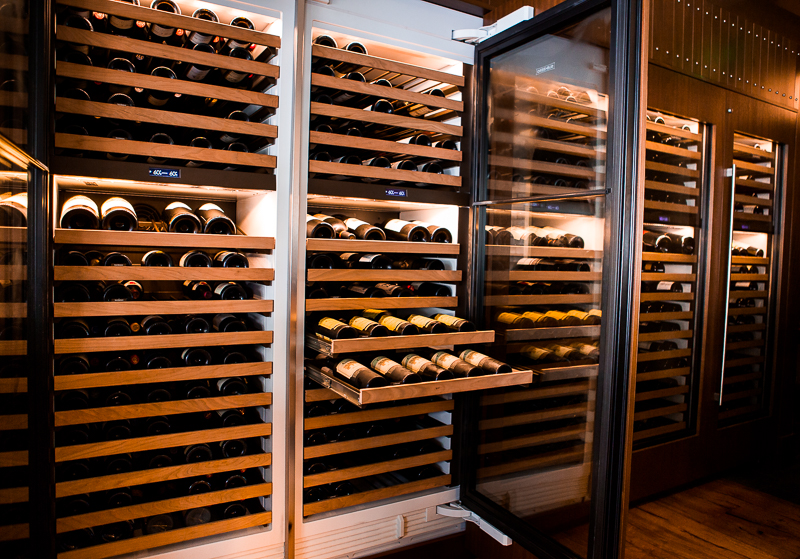 In the wine cellar at Mooo, located within XV Beacon Hotel in Boston, there are two bottles of 1907 Heidsieck Monopole Champagne that were discovered more than 20 years ago at the bottom of the Baltic Sea. They were found aboard a Swedish schooner that was sunk by a German U-boat during World War I, and the depth, pressure, temperature and darkness of the ocean water had perfectly preserved the Champagne.

Today, those precious bottles, which sell for $14,000 apiece, are preserved in the restaurant’s temperature-controlled Reserve Room, just waiting for the right customer to uncork a bottle that has been waiting to be consumed for nearly 100 years.

At Mooo, every bottle of wine is carefully stored in a temperature-controlled atmosphere that protects them from heat and humidity, damaging light and vibrations. The wine cellar also serves as one of the city’s most exclusive dining venues, where customers feast on modern steakhouse dishes beneath double-vaulted ceilings. “We want to protect our wine from its greatest enemy, which is oxygen in the air,” says Alexa Demarco, general manager at Mooo. “Hence, our custom cellar design of our angled racks for our most valuable wines in our Reserve Room, which ensures that both wine and the air bubble are in constant contact with the cork. If the cork dries out, and eventually shrinks, it will no longer act as an airtight seal and it may start to allow oxygen into the wine and spoil it for good.”

Equally critical is maintaining the proper temperature, for the amount of oxygen may reach harmful levels if temperatures fluctuate dramatically. At Mooo, temperature readings are checked daily. “The ideal temperature is about 55 degrees,” Demarco says. “Temperature fluctuation is the most serious hazard for wine storage… the warmer it is stored, the faster it will mature. Wine stored at 60 degrees will develop faster and possibly with less complexity.”

When a customer walks into Meritage, located in the Boston Harbor Hotel overlooking Rowes Wharf, executive chef Daniel Bruce wants them to think about more than the fresh seafood and delectable farm-to-table offerings. As the restaurant where the Boston Wine Festival, which was founded by Bruce, began nearly 30 years ago and continues hosting numerous wine dinners throughout the year, he wants them to know that wine is as much a signature of his establishment as the food. And a bank of four Sub-Zero wine storage units, stretching from floor to ceiling, sends that message out loud and clear. “The first thing that customers see when they walk in the door is all these beautiful wines on display,” Bruce says.

At Smith & Wollensky’s new location in Wellesley, which opened in May 2018, corporate chef Matt King considers the wine storage units to be a key feature in the restaurant’s ambience. “They are not just functional from a storage standpoint, but they are part of the decor,” he says. “We have six coolers built into the cabinetry, and as you’re sitting there looking at all this wine on display, perhaps you say, ‘You know what? I would like some wine.’” Bruce installed 10 Sub-Zero units at Meritage in 2003 to store one of New England’s most comprehensive wine collections. Meritage has more than 750 bottles on the wine list, including many hard-to-find classic wines. Dual temperature zones, which can be set from 39 to 65 degrees, are critical. “It allows me to go to different ranges with my whites and reds,” he says.

At the new Wellesley location for the national steakhouse chain Smith & Wollensky, 11 Sub-Zero units were installed, and the company will soon be installing 16 units during a remodel at its Boston location on Congress Street. “I like that the units can be easily integrated into the cabinetry,” King says. “You can get other wine units where you can build an enclosure and slide them in, but they don’t become part of the furniture in the same way.” King says that the units accommodate more wine in a smaller footprint than others. “So, you’re not eating into your seating capacity, and you still have the depth and breadth of a wine list that you need,” he says.

Customers at Smith & Wollensky’s Boston and Wellesley locations do not need to search page by page through a lengthy wine list. Instead, they are handed iPads, which allows them to search by type of wine, location and price. Each wine also comes with tasting notes. “If they’re looking for a California Cabernet in a certain price range, it will show them everything we have,” King says. “It’s good for the novice who doesn’t know much about wine and doesn’t want to be embarrassed, and for the wine aficionado who can find rare gems much easier.”

At Prezza, located in Boston’s North End, the wine list features more than 600 labels and the restaurant has more than 6,000 bottles to store. David Petrilli, general manager and beverage director, stores a selection of the more intriguing wines in a Sub-Zero unit that is visible to customers. The unit was purchased 18 years ago, and Petrilli says it offers the power of suggestion to customers who are debating a wine purchase. At Tonno, the company’s newest restaurant in Wakefield and Gloucester, two new wine units are located next to the bar. “Customers look across from the bar, see bottles in a nice wine cooler, and I think that helps drive sales,” he says. Easy access to the wine also allows the restaurant to quickly serve customers. “The worst thing is for someone to order a bottle of wine and then wait 10 minutes while someone retrieves it from the basement,” Petrilli says. “That accessibility and visibility are both selling points.”

Lower Falls Wine Company in Newton, a specialty high-end retail outlet with more than 10,000 cases of wine, caters to consumers seeking wines that are “interesting and special,” says owner Phil Minervino. Recently, a bottle was purchased for $26,000. “When somebody buys something like that it has to be properly stored,” Minervino says. He installed a Sub-Zero unit that is visible from the street and stores 12 cases of wine. “We use our Sub-Zero units to store not just the crème de la crème of wines, but also those that are eye-catching.” Thanks to modern wine storage units, restaurant owners can set separate temperatures for red, white and dessert wines, so when that special bottle is opened at the table, the customer is treated to the wine in all its complexity and elegance. Even those, like the two 1907 bottles of champagne at Mooo, that are a century old.