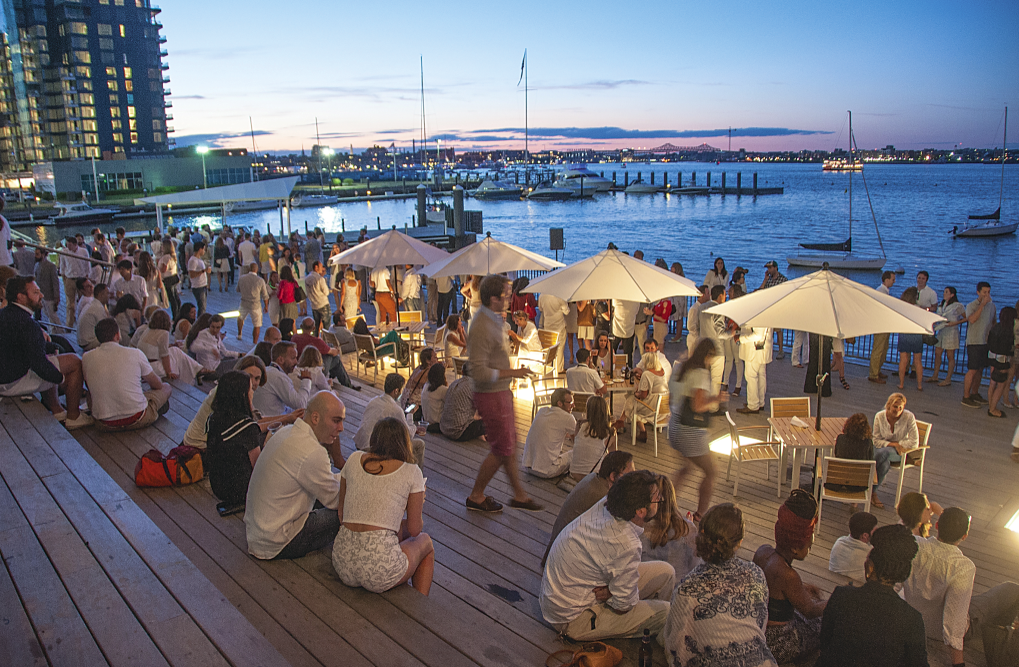 Boston’s Seaport is booming. In the past 10 years, this neighborhood that sat vacant for decades has seen the advent of high-rises sprouting on top of former parking lots, tony condos, business headquarters and posh new restaurants and hotels. The inventive new spaces and concepts inspired the area’s moniker, the Innovation District, but older businesses (some a century old) and historic sections maintain the old Boston charm. Spend the weekend in the Seaport and feel part of the pulse. All you need is a comfortable pair of walking shoes to enjoy contemporary art exhibits, high design, new bars and eateries and a few historical establishments, all in this one burgeoning quarter on Boston Harbor.

The Harborwalk bordering the edge of the neighborhood creates a pathway between the buildings and the harbor. Strategically located benches allow visitors to watch boats, ferries and cruise ships entering and leaving the harbor and planes taking off and landing at Logan Airport across the way in East Boston. In the warmer months, the scene isn’t just for looks; boat tours take groups out to the Boston Harbor Islands for the day, where you can stroll around, explore old forts and have a picnic. Two Water Taxi Services (bostonharborcruises.com and roweswharfwatertransport.com) operate year-round, whisking visitors to the district from Logan Airport, as well as making other stops in the area.

The Envoy Hotel (70 Sleeper Street; theenvoyhotel.com) built in 2015 has quickly become a popular venue for Lookout, their rooftop bar that overlooks Boston Harbor, the Fort Point Channel and buildings of the Financial District. The hotel’s 136 rooms and suites are furnished minimally with pops of color, and modern designs and floor-to-ceiling windows expose the city skyline. In the street-level Outlook Kitchen and Bar, chef Tatianna Pairot Rosana creates a menu using regional ingredients inspired by her French training, her Cuban heritage and her wife’s Korean heritage. For entertainment, local musicians provide live acoustic tunes for restaurant-goers.

The Seaport Hotel (1 Seaport Lane; seaportboston.com) has all the standard amenities you’d expect and some surprises, including approximately one million bees on their roof kept by an on-staff beekeeper. The insects are one of many green initiatives in the hotel’s “Seaport Saves” program. Guest perks include allergy-friendly rooms, complimentary bicycles and if you arrive in a hybrid car you receive one night complimentary valet parking.

Down the street, District Hall (75 Northern Avenue; districthallboston.org) is where ideas are nurtured in the Innovation District. The public space, built by Boston Global Investors, has workstations that are open to the public, as well as conference rooms, classrooms and assembly space available for rent. There’s a college library vibe. Brew (75 Pier Four Boulevard; brewcafeboston.com) is the supplier of caffeine for the building, and the cafe also serves breakfast, lunch and snacks. The attached restaurant Gather (75 Pier Four Boulevard; gatherboston.com) buzzes with chatter and shared lunches during the workweek and also serves dinner and weekend brunch, where a favorite is chicken and waffles and fluffernutter French toast—Frosted Flake-crusted challah bread that’s coated with layers of marshmallow and peanut butter.

Wander through the Seaport and you’ll find many bars and restaurants on the ground levels of the proliferating high-rises. By evening, an after-work crowd flocks to the industrial-designed spaces, many with large windows, hanging lights and warmly lit bars. For high-end Italian, you can’t go wrong at Strega Waterfront (1 Marina Park Drive; stregawaterfront.com) on Fan Pier with views of the harbor. The Greek restaurant Committee (50 Pier Four Boulevard; committeeboston.com) is a popular event and meet-up spot; a fitting use since the restaurant was founded on “meze,” a Mediterranean dining concept that means getting together and eating a little of everything. Or snag a seat at one of three bars at Babbo Pizzeria e Enoteca (11 Fan Pier Boulevard; babbopizzeria.com) for pizza, antipasti and cocktails, and try a slice from the wood-burning brick oven.

Of course, there is an abundance of seafood restaurants in this harborside neighborhood, including the oldest family-run eatery in Boston—the NoName Restaurant (15 1/2 Fish Pier Street East; nonamerestaurant.com). In the early 20th century, Yanni Contos served fresh seafood from a stand on the Fish Pier and opened a restaurant there in 1917. For over a century, the Contos family has been serving local catches in a no-fuss environment. “I’m right on the Fish Pier, you can’t get any fresher than here,” says manager Jimmy Klidaras. “Most of the fish we get fresh every day from the fishermen and these are guys I grew up with, I know them all.” Favorites include lobster, shrimp and scallop platter, sourced locally and prepared simply with spices, cooking wine and butter. The seafood chowder is very popular. “No potatoes, no bacon, no flour. Just haddock, cod, shrimp, clams, a little paprika, onion and some secret ingredients from the family recipe,” says Klidaras. “Everybody loves it.”

Further down the waterfront, the Yankee Lobster (300 Northern Avenue; yankeelobstercompany.com) family boasts five generations of men who made their living in the fishing industry. Today the operation run by Joseph Zanti and Dennis Kelly includes Commercial Lobster, the wholesale business, as well as Yankee Lobster, a sit-down restaurant and also a retail business that ships lobsters, steamers and clam chowder anywhere in the continental United States in less than 24 hours (a great gift for the homesick). The family business has been operating since before the Seaport began to rise around them, and they pride themselves on their laid-back ambience. “We are a hole-in-the-wall kind of place, it’s very low key and very casual, which we enjoy, especially being in the Seaport, where there are a lot of high-end restaurants,” says fifth-generation Frank Zanti, manager.

Legal Sea Foods has their headquarters in the Seaport as well as Legal Test Kitchen (225 Pier Four Boulevard; legalseafoods.com), which has a menu that differs from Legal’s standard offerings. “The Test Kitchen has a seafood-based concept but features multicultural cuisine,” says Ida Faber, vice president of marketing at Legal Sea Foods. “It’s open late, it’s a smaller footprint and a neighborhood restaurant.” Across the street, Legal Harborside’s (270 Northern Avenue) three floors face the harbor and each has its own kitchen and menu. “The third floor is sushi bar, second floor is white tablecloth, celebratory dining and is open for dinner, and the first floor is the most casual dining and it’s open for lunch and dinner,” says Faber.

Before the Seaport was buzzing with development and business, many found themselves in the neighborhood events happening at the two second largest event centers in the city—Seaport World Trade Center (200 Seaport Boulevard; seaportboston.com) and the Boston Convention and Exhibition Center (415 Summer Street; bostonconventioncenter.com). Popular events include the Boston Wine Expo, the Boston Flower and Garden Show (bostonflowershow.com) as well as the New England Boat Show (newenglandboatshow.com). Another old standby attracting out-of-towners is the Blue Hills Bank Pavillon (290 Northern Avenue; bostonpavilion.net), an outdoor amphitheater on the water that can hold up to 5,000. Beneath the white tent musicians such as Bonnie Raitt, Bob Dylan, Aretha Franklin and Lynyrd Skynyrd play into the summer night.

At the edge of the Seaport is Harpoon Brewery (306 Northern Avenue; harpoonbrewery.com), which has daily hour-long tours. But you can also grab a seat at one of the long wooden tables inside the Beer Hall. Opt for a single pint or try a few drafts with a flight of six-ounce tastings. The brewery hosts festivals throughout the year. For more craft beer, Trillium Brewing Company (369 Congress Street; trilliumbrewing.com) is a 15-minute walk away in the Fort Point neighborhood. Husband and wife JC and Esther Tetreault founded the brewery in 2013 and have been serving the Greater Boston area farmhouse-style ales since. They opened a new tasting facility in Canton in 2015, but many of their beers reflect the company’s roots in the historic Boston neighborhood, including one of their most popular, Fort Point Pale Ale.

Leave the brewery and walk through the Fort Point neighborhood. Once a land of manufacturing and warehousing, Boston Wharf Company created an enclave of brick sidewalks and buildings. When the industry died down in the 20th century, artists moved into the lofts and former warehouses, laying the foundation for what is today one of New England’s largest artist communities. The Innovation and Design Building (21 Drydock Avenue; idbldg.com) has a similar history; the 1.4 million-square-foot building provides spaces for a variety of creative industries, including the Boston Design Center (1 Design Center Place; bostondesign.com), where numerous home design showrooms display over 1,000 domestic and international product lines for customers. The eight-story building was originally built in 1918 and was used by the South Boston Army Base for warehousing and storage. Today the building has a new purpose and serves as the offices for architectural, communication and design firms, retail offices, and tech start-ups. The public is welcome. A neighbor to the Design Center, 7 Tide (7 Tide Street; seventide.com) is the newest design-forward destination if you’re in the market for high-end Wolf and Sub-Zero appliances, Kohler products or highly customizable Marvin windows and doors.

Art brings life to old venues, but in the case of the Institute of Contemporary Art (25 Harbor Shore Drive; icaboston.org), a new venue brought more possibilities for a growing contemporary arts community. The building is a work of art itself, designed by Diller Scofidio + Renfro Architects. The geometric structure has alternating transparent and translucent glass panels, which create a bright, open space and frame a number of remarkable harbor views. Colette Randall, director of marketing and communications for the ICA, explains that the views afforded by the architecture were intentional “to cause people to think about how art can shape and inform our perspectives.” In the summer months, the ICA has weekly outdoor programming including free music on Thursdays in collaboration with Berklee College of Music and dance parties on the first Friday of the month.

If you fall in love with the Seaport and want to take up residence here, you’re in luck. The Fallon Company’s Fan Pier luxury condominiums at Twenty Two Liberty and 50 Liberty Drive, are both phenomenal venues to experience and enjoy Boston Harbor as a dynamic place to live, work, dine and socialize.