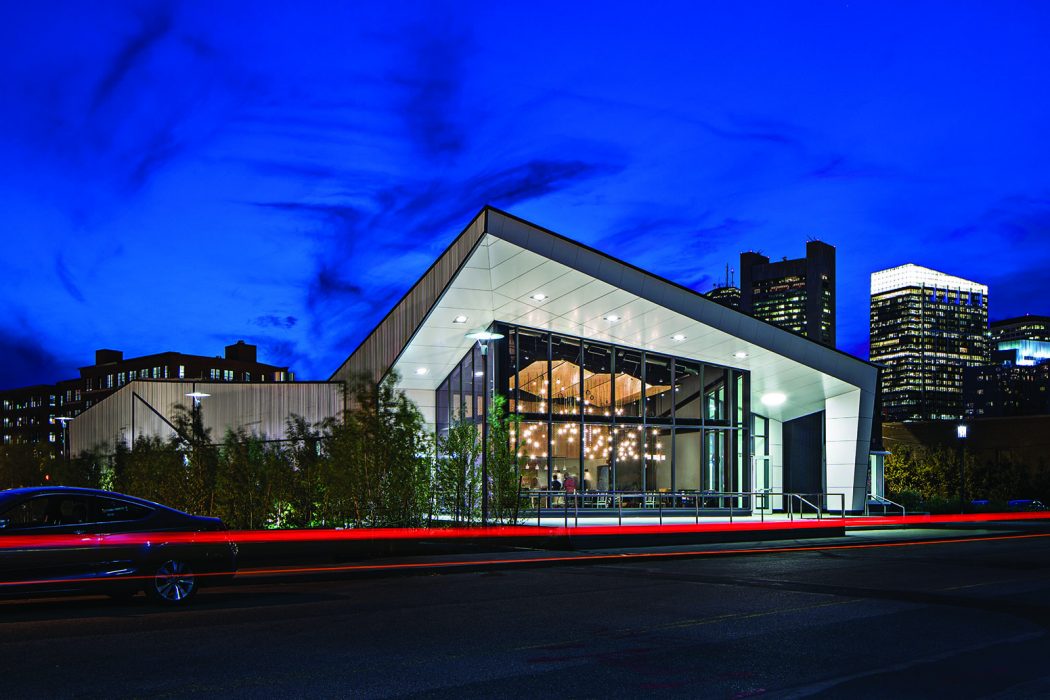 You might consider them upstarts in the world of real estate. Unassuming, unattended neighborhoods that slowly but surely lure people in with quietly emerging amenities. Housing prices, commercial ventures, cultural initiatives and grassroots efforts have all impacted these areas’ transformations. But no matter the cause, the result of their makeovers is clear: they are now destination hot spots worthy of some undivided attention.

Don’t let the new face of Boston’s waterfront fool you; it has the same charm it’s always had but with more amenities and restaurants than ever and thus a bustling social scene. Head first to Fort Point, gateway to the seaport and newly named “Innovation District,” which has a burgeoning restaurant scene and an even hotter real estate market. Many turn-of-the-century lofts in former factories are being turned into luxury apartments with personality, and the recent opening of the amenity-filled 315 on A (617-423-1900) residential apartment building (think online concierge, pet-friendly accommodations and onsite bike maintenance) has given Bostonians another reason to move into the area in droves. 315 on A now hosts Made in Fort Point (617-423-1100), a gallery dedicated to local paintings, jewelry, prints and more.

You’ll want to take a day to explore the newly revamped waterfront and Fort Point, where some of Boston’s most skilled chefs have set up restaurants, but first work up an appetite at the new Boston Tea Party Ships and Museum (617-338-1773), dedicated to the preservation and ongoing education of the American colonies and of course, that infamous tea-throwing act that occurred on December 16, 1773.

After learning more about one of the sparks that ignited the American Revolution, head up Congress Street to restaurant row. In addition to the already established Menton, Sportello and Drink, Row 34 (617-553-5900) recently set up shop as the “working man’s oyster bar.” The sister restaurant to Island Creek Oyster Bar in Kenmore Square, Row 34 serves delectable dishes like homemade bucatini with shrimp, crab toast and its new “breed” of Duxbury oysters, from which the boîte draws its name. The casual scene (no suits and ties here) also pulls diners in with a craft beer list of no less than 14 on draught at a time, like the oyster stout from Perle ai Porci. Those looking to continue their beer tour will want to stop by Trillium Brewing (617-453-8745), where you can learn more about the brand and taste some of their brews, like the Double Pot and Kettle Oatmeal Porter.

Nearby Pastoral (617-345-0005) dishes up can’t-stop-at-one-piece brick-oven pizzas, calzones and beer cocktails. The kid-friendly space is the perfect early-dinner drop-by after a day at the Children’s Museum (617-426-6500), just a few blocks up the street. After dark, Pastoral turns into the perfect spot for friends to gather. Around the corner, Bastille Kitchen (617-556-8000) has the sexy in-the-know vibe of many of Seth Greenberg and Cameron Grob’s other ventures. You come for the food and the scene and to catch a peek at private events held in the cozy-chic, lower-level space, the Chalet.

The seaport continues to change as luxury condominiums and new office spaces rise upwards. Residents and visitors can rely on a steady schedule of must-see exhibits and concerts at The Institute of Contemporary Art/Boston (617-478-3100) before hopping over to Louis Boston (617-262-6100) for high-end clothing and a selection of tightly curated new designers and to the adjoining Sam’s at Louis (617-295-0191) restaurant for an unforgettable meal and view of the harbor. Empire Restaurant and Lounge (617-295-0001) provides a place to nosh on fresh sushi before hitting the dance floor in the clubby atmosphere. Across the street, District Hall (617-982-3213) offers the opportunity for tech types to work and commune in a spacious, well-lit, open environment. Gather (617-982-7220), a cozy restaurant serving inventive fare like charred octopus and roasted duck tacos with apple kimchee, is located inside District Hall.

Whether you want to see the waterfront on foot via the extensive Harborwalk (617-482-1722) or eat your way through Fort Point one oyster at a time, you will find endless opportunities for enjoying this burgeoning and exciting area of the city.

With its blend of small-city charm and cultured cool, Downcity evokes European cities and Brooklyn neighborhoods. But the historic heart of Providence has a spirit uniquely its own, thanks to the growing community of artists, foodies and entrepreneurs that has revived the neighborhood over the past decade.

Start at the Arcade. The 1828 shopping mall was renovated in 2013, reimagined as a smart space of micro lofts, boutiques and eateries that put a modern twist on historic charm. Among the offerings, New Harvest Coffee and Spirits (401-272-4604) is a coffee house by day and sleek cocktail nook by night, while Carmen and Ginger (401-274-1700) is a time capsule of vintage finds.

Further down Westminster Street, strings of fairy lights glow over coffee shops, bookstores and lovingly curated boutiques such as Queen of Hearts (401-421-1471) for style mavens and the handmade paradise of Craftland (401-272-4285, ) for DIY-lovers. Homebodies in search of mod tea towels or clever accessories could easily waste an afternoon browsing the likes of Homestyle (401-277-1159) and Noon Design Shop (401-455-1222). Among the day’s potential snack stops, Ellie’s Bakery (401-228-8118) is a sweet Paris-style café serving breakfast and lunch.

Cocktails in Downcity are serious business. Handcrafted creations at The Eddy (401-831-3339), ping-pong at the Salon (401-865-6330), a hidden-away lounge at the Magdalenae Room (401-455-DEAN) and the rooftop deck at GPub (401-632-4782) invite everyone from bankers to grad students to end the day with a toast. Brick-and-mortar favorites aren’t the only draw; locals track the comings and goings of the many neighborhood food trucks at foodtrucksin.com.

Above all, the friendly neighborhood vibe is cultivated in an ongoing calendar of cultural happenings. Summertime “Movies on the Block” are a throwback to drive-ins, while local institutions such as Trinity Repertory Company (401-521-1100) and Providence Performing Arts Center (401-421-2997) are crowd-pleasing mainstays. A spate of art-house offerings, such as silkscreen workshops at AS220 (401-831-9327, as220.org), keep the energy fresh. Just across the river, the RISD Museum (401-454-6500) is a world-class destination. Saving the best for last, nearby WaterFire (401-273-1155) is one of the city’s most beloved warm-weather festivals, with a spirit that lingers long after the fires are out for the season.

obblestoned Thames Street and mansion-lined Bellevue Avenue tend to get all the love when it comes to Newport’s main streets, but just beyond these lies Broadway, which is quickly becoming a popular address for wining and dining in the city by the sea. Broadway has undergone a huge transformation over the last several years and is now home to some of the city’s best restaurants, not to mention many of the oldest and most historic buildings in town.

You’ll want to fuel up before you explore the area, so start your day with a hearty breakfast at the Corner Café (401-846-0606) located at 110 Broadway. This BYOB neighborhood spot has one of the most diverse breakfast menus around, including a proper Irish breakfast, creative omelets and favorites like Portuguese sweetbread French toast and eggs Benedict.

To visit some local landmarks that have shaped our nation’s history, head over to where Broadway begins, at the head of Washington Square. Located here is the fourth oldest statehouse in the country, Colony House, which has historical significance dating back to the 1760s, when the death of George II was announced from the balcony, and a few years later, when citizens celebrated the repeal of The Stamp Act on its front steps. The building has since been used as a hospital, the primary statehouse of Rhode Island and Providence Plantations until 1901 and the Newport County Courthouse through 1926.

Across from Colony House is the Great Friends Meeting House on the corner of Broadway and Marlborough Streets. Built in 1699, it is the oldest surviving house of worship in Rhode Island. A couple steps farther and you’ll hit the oldest house in Newport at 17 Broadway, the Wanton-Lyman-Hazard House, which was built in 1697 for Stephen Mumford.

Looking for a caffeine fix or some WiFi? Pop into Empire Tea and Coffee (401-619-1388) at 22 Broadway for the perfect chai latte, or choose from its wide variety of loose-leaf teas or in-house roasted coffee.

Perhaps the best part of the revitalized Broadway neighborhood is its watering holes and many new eateries. A local favorite that serves up a tasty twist on traditional pub food is Malt (401-619-1667), located at 150 Broadway. Its cozy bar area and impressive selection of beers on tap make it a great spot to post up after a long day.

Just a few doors down the street you’ll find Salvation Café (401-847-2620) at 140 Broadway. Salvation offers creative cocktails and an always-changing seasonal menu with everything from Pad Thai (a house favorite) to a short-rib burger. In the summer, its covered outdoor patio lined in string lights is the ideal spot for imbibing.

For a low-key vibe and some comfort food, check out Boru Noodle Bar (401-846-4200) at 36 Broadway, serving up gourmet ramen noodle bowls with a BYOB policy.

Next time you’re heading over the bridge to Newport, take a detour down Broadway. Its local flavor never disappoints.