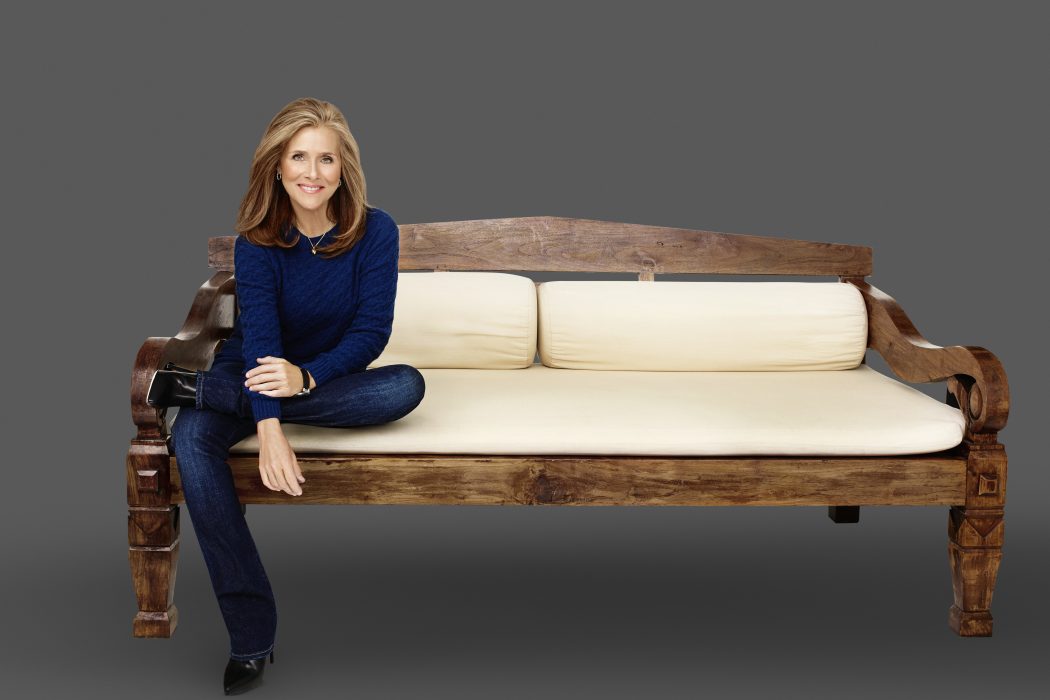 The warm, friendly connection viewers have with Meredith Vieira while watching her on television is amplified exponentially when speaking to her in person.

When the publicist for The Meredith Vieira Show introduced us after a recent taping of the show in New York City and mentioned that we have a great deal in common, Vieira didn’t skip a beat: “You served time?”

Based on articles I had read about her, plus all the years of watching her on various television programs (including Today, The View, Who Wants to Be a Millionaire? and now The Meredith Vieira Show), I thought I had a good sense of what Vieira is all about.

Nevertheless, I made a point of closely observing her during the show’s taping, especially during production breaks when she interacted with her staff. Was she nice to them? Appreciative? Yes and yes. At one point, after an assistant gave her material to review and walked away, Vieira realized she needed additional information and called the staffer back in an apologetic manner. Although I was too far away to hear their conversation, I could read her lips when she said “I’m sorry” and then “thank you” as she touched the young woman’s arm.

After witnessing that brief interaction, I was not surprised by her answer when asked later if she has any pet peeves.

Vieira, 61, admits that while she has said some “nutty” things on the air, including informing viewers of her penchant for going commando, she has never said anything hurtful. “It’s not worth it to me; life’s too short.”

And while interviewing celebrities comes with the territory, Vieira would rather focus on ordinary people doing extraordinary things.

“I’m not particularly celebrity-driven, to be honest. Celebrities often come with agendas—and not in a bad way—but there’s usually something they have to push and you’re the fifth or sixth show they’ve been on,” she says. “But if George Clooney knocked on my door, I’d say great!”

On the day of our interview, Vieira was particularly moved by a young woman who had started a letter-writing campaign that resulted in a veteran, struggling after returning from active duty, receiving hundreds of letters that gave him the boost he needed to get back on track.

“Those are the moments when I go, ‘Wow, what a great opportunity we have on this show,’ ” she says. “I don’t leave here at the end of the day feeling bad about what I do.”

Valerie Schaer, an executive at NBCUniversal Domestic Television who has known Vieira for nearly 20 years (they met when The View debuted in 1996), says people are drawn to her friend’s authenticity. “She is just very genuine, and as a result, viewers feel like they know her, whether as a sister, mom, aunt, best friend…She really resonates with them.”

As confident and self-assured as Vieira is, she admits to still getting pre-show jitters.

“I get nervous every time before I go out. The crowd goes crazy and that makes me nervous because they’re expecting something,” she says. “I also have a long-held belief that feeling butterflies before a performance is an indication that you care. If you don’t experience nervousness and start to think you’re the bomb diggity, that’s when you start to fall on your face. It’s all about preparation and coming with something to bring to the table.”

Vieira’s level of openness is refreshing. She admits to being a big-time crier (“I cry all the time. I cried watching Whiplash over the weekend; I was just crying thinking about my son coming back from China after three and a half years; then I started crying about the fact that I only have about 30 more years of life. All within the same 10 minutes!”) and has talked publicly about personal topics ranging from being in an abusive relationship when she was younger to her husband Richard Cohen’s battle with multiple sclerosis.

“He’s doing well,” she shares. “He’s part of a stem cell clinical trial and while it’s hard to tell what effect it’s having, it seems to me that his gait is a little stronger.”

Vieira says that she and her husband, along with their children—Ben, 26, Gabe, 23, and Lily, 22—have benefited from their strong sense of humor. “For us, that’s been vital, especially when you’re dealing with something challenging like MS,” she says. “Although everybody has something; everybody has challenges.”

Talking about motherhood brings a smile to Vieira’s face and, yes, tears to her eyes. “The best thing about it for me—oddly enough because I never wanted them to grow up—is seeing the young adults they’ve become. I have such pride because they’re really lovely people, and I attribute that to Richard more so than to me,” she says. “Because they’ve had a dad with illness, they have a tremendous sense of empathy that I don’t think they’d have to the same degree in another kind of home.”

Vieira reveals that she loves sitting around the kitchen table with her children and their friends, having a glass of wine and discussing world events.

“Everybody says this generation doesn’t care about anything. The kids I see and interact with care passionately,” she says. “And they’re not afraid—I mean, they see potential and feel good about the future.”

Asked what advice she’d give young women wanting to be the next Meredith Vieira, she doesn’t mince words.

“Don’t take anything for granted. We have a lot of interns who come in and have a sense of entitlement. I say that’s the last thing you should have. Be grateful that you’re here and work hard and yes, sometimes—especially with interns—you’re getting a cup of coffee,” she says. “Appreciate the fact that you’ve got the job because people notice. They do.

“And if you’re going to be in this particular business, I always say to people: learn to write,” she adds. “It’s astounding how many people cannot put together a sentence. It’s all about communication.”

The youngest of four children, Vieira was raised in East Providence and attended Tufts University. She now calls Westchester County, about 30 minutes outside Manhattan, home as well as Wellfleet, where she has a summer home.

“I love that it’s scruffy. It really fits my personality,” she says of her Cape Cod home-away-from-home. “You can drive up there, get out of your car, put on your flip-flops, a baggy pair of shorts and a T-shirt, grab a lobster roll and you’re good to go,” says Vieira, a self-proclaimed “vegetarian wannabe” who admits she would miss seafood if she went full-fledged.

“I really love the beautiful beaches, the solitude,” she says with a far-off look of contentment. “When I cross the Bourne Bridge, my blood pressure drops. It absolutely drops.”

And with that, we wrapped up our interview, but not before Vieira gave me a big hug and kiss. (She really is as affectionate as she appears to be on television.) I felt like I had spent an afternoon with an old friend, and was happy, though not surprised, to learn that her kind and humorous television persona is not just an act; it’s the real deal.