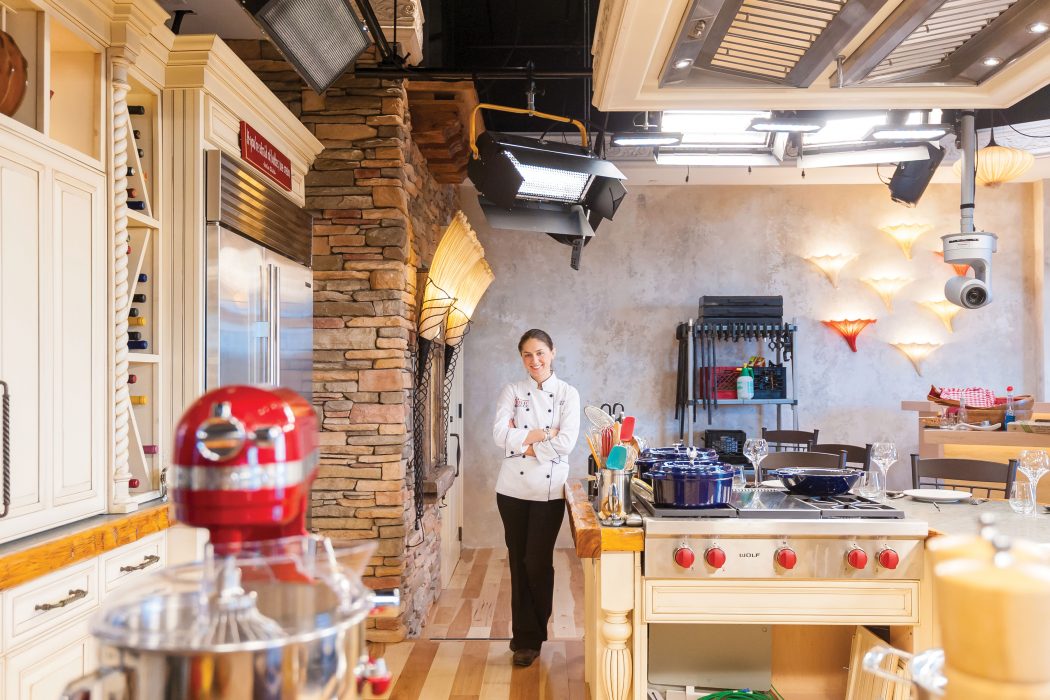 As brick and mortar retail spaces struggle to compete with the convenience of online shopping, mall owners are getting creative when it comes to getting customers out of their homes and away from their keyboards. As a result, more and more of these venues are becoming as much about entertainment and dining as they are about shopping.

One local example of this phenomenon can be seen at the recently minted “Kingston Collection,” in Kingston. When the time came to rebrand and rebuild the defunct Independence Mall site, the new owners, Pyramid Management Group, began filling empty retail spaces with entertainment options like an indoor go-kart track, bowling alley and trampoline park. But the new mall needed a lynchpin tenant—the star of the show if you will—and for that Pyramid turned to someone who had experience in both the restaurant and entertainment worlds: Jim Cafarelli, a founding partner of the House of Blues and the developer of over 300 restaurants worldwide, including Rustic Kitchen in Hingham.

Pyramid wanted Cafarelli to develop a dining venue, but they were also particularly interested in one of his recent successes—the creation of an Emmy Award- winning cooking program called “The Cooking Show,” which had been taping in Boston for seven years. They eventually convinced Cafarelli not only to build a new restaurant at the mall, but also to produce the cooking show from a dedicated studio space within it.

The buzz surrounding Bar Rustic and The Studio Kitchen began long before the doors were open. The 10,000-square-foot multi-faceted culinary destination features a large bar area, an upscale dining room with a wood-burning oven, a state-of-the-art studio kitchen used for live cooking show events and a private “Chef’s Hall” for small-group cooking classes.

Cafarelli, who lives in Canton, oversaw every aspect of the design and construction of the restaurant and studio kitchen. As the creator and executive producer of The Cooking Show, he had the entire restaurant venue wired for video so he could film in the front and back of house areas, and had a separate kitchen and pantry built specifically for the cooking show. With Cafarelli’s wife Kathy managing the day-to-day restaurant operations and his son Michael managing the television production side of the business, it’s a true family affair.

“The design of the restaurant is considered ‘industrial chic’ and contains both hard and soft elements,” says Cafarelli. “Concrete floors and steel beams are counterbalanced by soft elements like live topiaries of herbs that the chefs can incorporate into their cooking.”

In the bar area, soaring ceilings are anchored by 12-by-24-foot riveted I-beams that were inspired by the architecture of New York City’s High Line train trestle system. The focal point of the main dining area is a massive wood-burning oven that helped inspire some of executive chef Joe DiFrancesco’s signature menu items, like ember-roasted butternut hummus. Beside the oven, a curved bar provides additional seating and allows customers to watch as pizzas and other dishes are prepared while sipping craft cocktails or something off the extensive wine list.

As for the rest of the menu, DiFrancesco says, “Our goal was to bring a high-end Boston dining experience to the South Shore. I would describe our main menu as fun, hip food. Customers will also be able to share small plates at the bar.”

DiFrancesco is committed to using locally sourced products whenever possible to help support the small businesses and provide diners with the freshest possible ingredients.

“We spend a lot of time visiting area wineries, breweries, farms and fishermen,” says DiFrancesco. Fresh flounder, monkfish and scallops are sourced from Red’s Best in Plymouth. Produce comes from Greenway Farms in Kingston; breads are made at Hearth Artisan Bread in Plymouth and beer from several local breweries, including Mayflower Brewery in Plymouth.

DiFrancesco brings significant culinary chops to his new position, having opened the Mexico City location of Rustic Kitchen. He also has the support of Emmy Award-winning celebrity chef and South Shore native Liz Bramwell, host of “The Cooking Show.”

With a degree from the Culinary Institute of America and 15 years of restaurant experience, the petite and highly energetic chef Bramwell has been a natural in front of the camera ever since Cafarelli hired her to host cooking shows over seven years ago. Previously filmed in Boston, the shows will now be taped in Kingston with a live studio audience. The Studio Kitchen provides one-of-a-kind interactive cooking and dining entertainment. Bramwell prepares a meal while taking questions from guests who are seated overlooking the studio kitchen. Multiple cameras are positioned around the room to ensure that the best possible angles of food preparation are captured but the space still manages to feel warm and inviting, with beautiful wood cabinets (modeled after the ones in Cafarelli’s home) and cherry red appliances.

With a witty and engaging personality, Bramwell quickly establishes a rapport with the people in the studio audience. In one recent cooking show episode she elicited laughter when she asked, “Which one of you gentleman has never seen the inside of a grocery store?”

While the audience for the taped TV version of the show is by invitation only, Bramwell also hosts weekly live dinner shows in the new Bar Rustic Studio Kitchen almost every Friday and Saturday night. These shows are very popular with couples and friends looking for a unique night out and were often sold out six months in advance at the Boston location. Given the high level of interest in the show, Cafarelli has plans to expand the number of Studio Kitchen dinners and will also offer private shows for company outings and family events and may even add a weekend matinee performance.

“I love the energy that flows both ways between me and the audience,” she says. “No two shows are ever alike. Each one is a surprise because I never know the people in advance. I try to create a comfortable atmosphere so that people ask questions and talk to their neighbors. I am passionate when it comes to educating people about food and sharing my knowledge. And I find that while people definitely come to have fun, most people want to take something away from the experience.”

Guests looking for a more hands-on cooking experience can find it in the intimate “Chef’s Hall” portion of the restaurant. An array of daytime classes are available and Bramwell, DiFrancesco and guest chefs and experts will share their knowledge and techniques with small groups.

While the act of going out to eat is itself a form of entertainment, the Bar Rustic team has created a whole new kind of culinary destination. Only time will tell if Cafarelli’s ambitious creation is the magic recipe the South Shore has been waiting for.