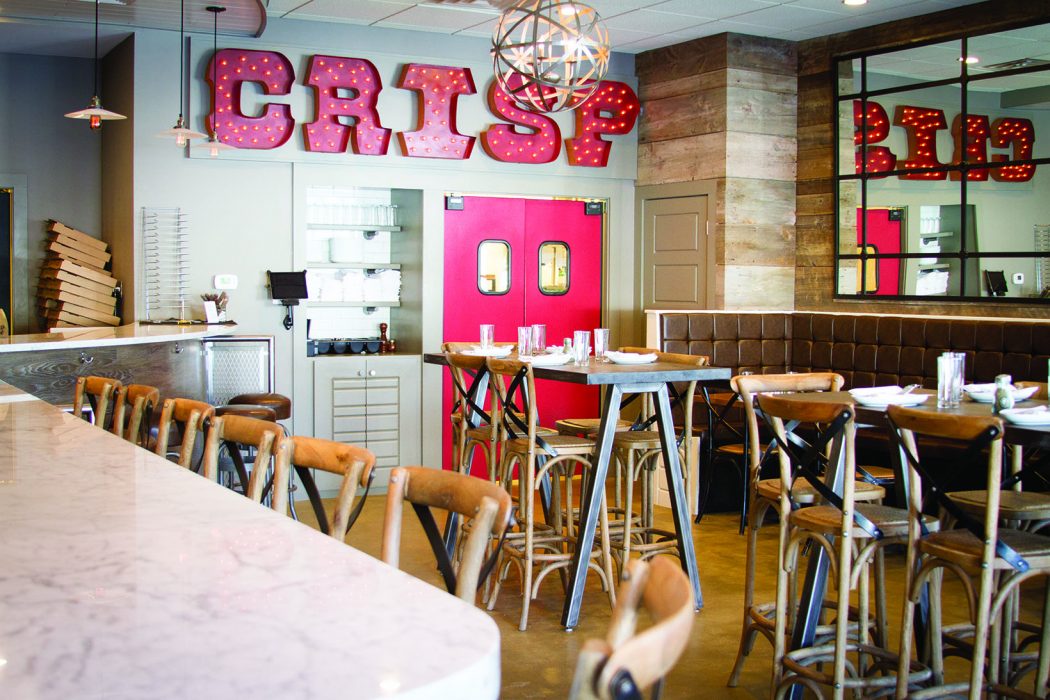 Whether the craving is for a new shirt, an unknown author, an untried recipe or even just a fresh outlook on life, we all attempt inaugurations once in a while (some more frequently than others). And just like anything else, trying out a new restaurant involves certain hazards of the unknown. To put your palate at ease, we’ve assembled the following group of culinary newcomers whose short-term histories are already generating long-term allegiances. Try any of the following once and you might soon find yourself a regular.

Bluefins Sushi & Sake Bar is a world-class sushi restaurant that guarantees the freshest seafood possible, thanks to owner Andy Baler, who also owns the Chatham Fish Pier Market and Nantucket Fish Company. Executive chef Paul Jung and his team take that perfect seafood and turn it into artfully prepared and stunningly plated dishes that pop with color and flavor. Whether you sit at the sushi bar and watch the chefs at work or choose a more private table in the contemporary dining room, be sure to start your meal with a specialty craft cocktail such as the namesake Bluefin, made with Grey Goose vodka, St. Germain and Hpnotiq liqueurs, white cranberry juice and Bluefins’ house-made blueberry syrup. For dinner, try the spicy tuna “Cape Cod Monster,” which comes with cucumber, torched yellow tail, spicy teriyaki, mango, tobiko, lime and scallions, or “Chatham’s Sunset,” which features spicy scallops with tempura crumbs topped with red tobiko and mango. True aficionados will enjoy the combination sushi/sashimi dinners.

The organic wood-fired flatbreads at Osterville’s Crisp (from a house-cured duck bacon pie to a local farm-egg and prosciutto creation) have brought new meaning to the pizza crave on Cape Cod. And then there’s the allure of the space itself, which boasts a mix of up-cycled barn wood and industrial-style lighting and décor. But what you may not know is that the kitchen staff’s commitment to all things local and homemade has been going strong since opening in fall 2013. Diners can expect to see ripe red peppers roasting in the wood-fired brick oven and local arugula and an assortment of other organic vegetables featured on seasonal flatbreads and homemade specialty sausages. Crisp’s one-of-a-kind charcuterie board features a mix of local cheeses, zesty homemade pickles, marinated olives and the chef’s own pork-liver pate made from locally raised organic pork. Enjoy what the warm weather brings at Crisp, both indoors and out, by the restaurant’s fire pit or outdoor bar.

Fresh, local and homemade are highlights of The Canteen experience in Provincetown. Partners Rob Anderson and Loic Rossignon, along with veteran chef Tom Pucci, have put their combined culinary genius towards a truly creative menu featuring the best ingredients they can find. The meat for their lobster rolls, served hot or cold, is shucked fresh daily while an in-house smoker makes delectable pulled pork. But that’s not all: the French fries are hand cut and the linguica homemade. Best-selling items include crispy Brussels sprouts in fish sauce and a banh mi sandwich made with marinated cod, garlic aioli, pickled daikon, carrots, cucumber, cilantro, mint and a touch of Sriracha sauce. Add a glass of Anderson’s homemade rhubarb soda and you will be in foodie heaven.

Chef/owner Michael Ceraldi draws on his Italian heritage and love of locally sourced foods to create a seven-course nightly menu at Ceraldi on Wellfleet Harbor. There are two seatings per night and reservations are highly recommended. Ceraldi has formed relationships with local farmers, fishermen, hunters, gatherers and beekeepers to keep his menu as local as possible. The industrial-style décor belies a warm and convivial atmosphere. The menu changes daily, depending on the season, but sample items include chilled Hillside Farm melon soup or gazpacho with a raw Wellfleet oyster, followed by delectable small plates of treats such as squash blossom tempura, fennel flan with a citrus Provincetown lobster salad, calamari caught off MacMillan Pier and summer vegetable lasagna. Ceraldi also takes menu requests and is happy to accommodate people with allergies or dietary preferences.

Ben and Angela Porter opened Viera in April 2014 with the goal of creating a familiar, comfortable menu with an emphasis on seafood. Ben, who studied at Johnson and Wales before training at a variety of Cape restaurants, added yet another criteria, that his meals be made from scratch without using any premade or processed ingredients. And this is why Viera, with its homemade bread and pasta and carefully sourced ingredients, has blossomed into a must-try eatery. Standouts on its pared-down menu include the Portuguese shellfish stew and sautéed Chatham cod, not to mention starters such as Big Rock Dennis oysters (served three ways) and fresh clam chowder. More carnivorous diners should try the slow-braised pork belly and grilled Wagyu Bavette steak.

The Orleans Public House menu changes seasonally and promises a fresh, modern take on classic pub fare. Its clam chowder—served with plenty of clams, bacon and diced skin-on potatoes and topped with chives—is one of the best around. Summer samples from its ever-changing menu could include watermelon salad, Thai chicken lettuce wraps and lobster mac and cheese. Fall samples range from a Mediterranean plate, complete with house-made hummus and tabbouleh, cucumber-mint salad, marinated olives, tomatoes, feta, and grilled pita, to a dinner entrée of pan-seared halibut with celery root purée, roasted root vegetables and a lobster reduction sauce. The food is creative and the atmosphere warm. In good weather, alfresco dining awaits on the covered patio.

It’s hard not to overeat at Rock Harbor Grill, where “share” plates like lobster mac and cheese, Irish nachos and mussels Dijon tempt before you even scan the menu’s gourmet entrées. Head chef Stuart Hirsch—former head chef at Wolfgang Puck’s Fort Lauderdale restaurant and later executive chef at Phusion in Woods Hole—lets his high-quality ingredients do all the talking. Seafood specialties like baked cod, seafood stew, fish and chips and hazelnut-crusted Faroe Island salmon mingle with satisfying mainstays like burgers and wood-fired pizza. Gluten-free options abound and the wine list is just long enough for serious consultation. Depending on your mood, you can dine formally at a table, eat alfresco on the back patio or cozy up to the bar.

For an authentic Italian meal, you can’t beat Villaggio at the Regatta, the latest venture of third-generation chef and restaurateur Jay Bartolomei. Set in an 18th-century Federal-style architectural gem, the Villaggio pairs a lively tavern with more intimate dining rooms. No matter your seating choice, bring your appetite, because the servings are plentiful. Start with carpaccio, paper-thin slices of tenderloin served with red onion, capers, lemon zest and arugula. The dinner menu indulges Italian food traditionalists with specialties like Marsala, piccata and saltimbocca. Bartolomei’s signature seafood dishes include a seafood zingarella, which is made with fresh lobster meat, jumbo shrimp and sea scallops and served with tender asparagus, artichoke hearts, sundried tomatoes and Sambuca sauce over pasta. Meat lovers will appreciate the crispy duck breast or pork osso buco on the Tuscan steakhouse menu.