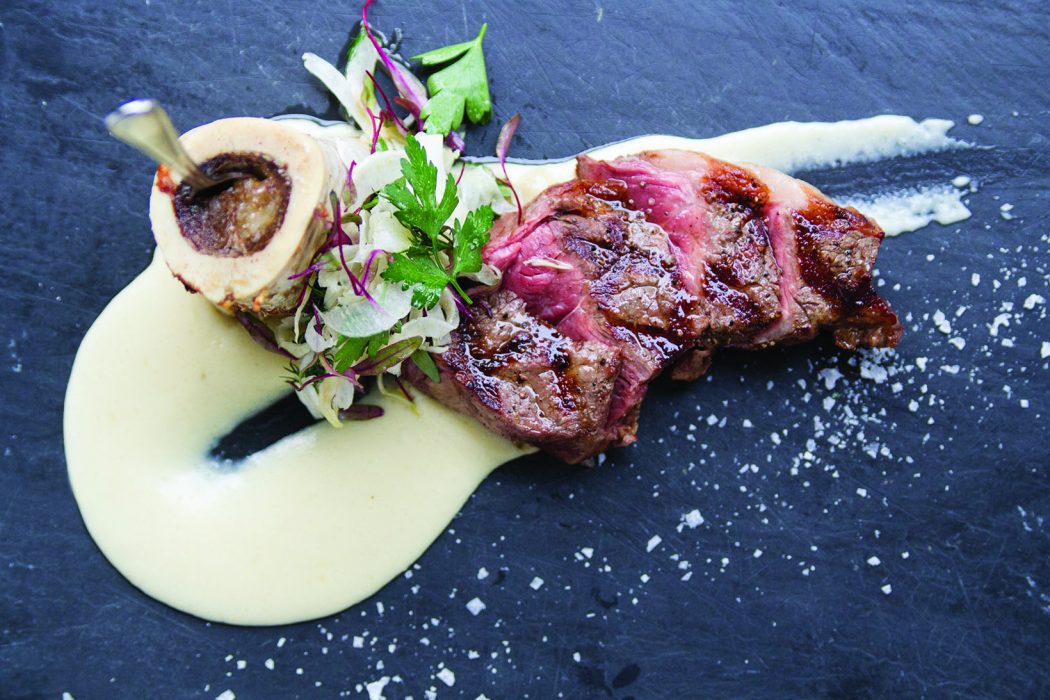 Whether the craving is for a new shirt, an unknown author, an untried recipe or even just a fresh outlook on life, we all attempt inaugurations once in a while (some more frequently than others). And just like anything else, trying out a new restaurant involves certain hazards of the unknown. To put your palate at ease, we’ve assembled the following group of culinary newcomers whose short-term histories are already generating long-term allegiances. Try any of the following once and you might soon find yourself a regular.

Nothing is wasted at The Salted Slate: “It is my job to highlight and draw out the best qualities of every ingredient that comes through our doors while utilizing every part,” asserts chef Benjamin Lloyd. By opting for whole animal purchasing from nearby farmers and fishermen, Lloyd ensures that his prepared meats come from animals that were raised and harvested humanely. Not surprisingly, the accomplished chef pays great attention to preparing his carefully sourced ingredients. Entrée selections are creative but still deeply rooted in classic American cuisine. Try the Rhode Island-raised pork chop, served with roasted heirloom carrots, pea greens, celery root mousse and bacon jam, or the swordfish plate, complete with black and red quinoa, tomato ragout, braised leeks and dried olives. And who can resist sharable starters such as a selection of artisan cheeses or even mac and cheese with giant shells, chives and bacon. Then end the night right with dessert classics like chocolate soufflé and Rhode Island cheesecake.

Rogue Island’s farm-to-table approach is literal. Housed in Downcity’s newly renovated 1828 Arcade, the rustic-industrial space features rehabbed exposed brick and stone from the original building—and everything from the black walnut bar to the reclaimed barn-wood tables and metalwork is handcrafted by local artisans. All the better to showcase the inventive, seasonally changing breakfast, lunch and dinner menu of locally sourced foods (such as a fried Baffoni Farms chicken sandwich with Aquidneck honey, or a Berkshire BBQ pulled pork reuben with North Country bacon and Narragansett Beer-braised cabbage). The proud selection of local wines and craft beers highlights many of Rhody’s own, including Foolproof Brewing Company and Proclamation Ale.

Benjamin and Heidi Sukle opened Birch in the summer of 2013, and the succinct restaurant name stems from Benjamin’s youthful penchant for Pennsylvania Dutch birch beer. But it also hints at his pared-down, concentrated approach to American cuisine that is turning all the right sort of heads (since the opening, he has been nominated for “Best Chef: Northeast” by the James Beard Foundation). His edible creations are decidedly modern, thoughtful and sometimes even a little avant-garde. No less than a food adventure, each menu nods to the current season while inviting guests to choose one item in each section from a list of four courses. Also, be prepared for the atypical interior, which is only large enough to seat 18 guests at a U-shaped counter.

In today’s locavore culture gone loco, a menu that reads, “Our house extra-virgin olive oil [is] imported from family-owned groves in Kalamata, Greece,” sets high expectations. Prepare to have them met by chef/owner Lauren Lynch and partner Tom Bovis at Rosalina, an industrial-chic Downcity eatery that celebrated its first year in April. Amid sleek banquettes and modern chandeliers, red-and-white checked napkins hint that you’re about to tuck into hearty Italian food, and these dishes soar way past that simple description. From the aforementioned olive oil partnered with Narragansett Creamery ricotta and brought when you sit down to improbably ethereal meatballs, ambrosial Bolognese sauce and dark chocolate polenta brûlée, Rosalina’s offerings will haunt you as much as Buck Hastings’ riveting black-and-white photo-looking portraits of the owners’ family members, including daughter Rosalina, now six.
—Janice Randall Rohlf

On the ground floor of the ultra-stylish Dean Hotel, Faust Hofbräuhaus is a modern take on a German beer hall, with a sleek, tiled interior and a menu of Deutschland staples, including locally baked pretzels with housemade mustard sauce, wursts, schnitzel and käsespätzle. Traditional communal tables are a good spot to gather with friends—or meet your fellow diners—while exploring the carefully cultivated beer and wine list of mostly German imports. A bonus: wander behind the curtain at the back of the restaurant to discover the Dean’s “secret” Magdalenae Room, a velvety, candelit cocktail lounge that strikes a warm balance to Faust’s minimalist appeal. —Nicole Parsons