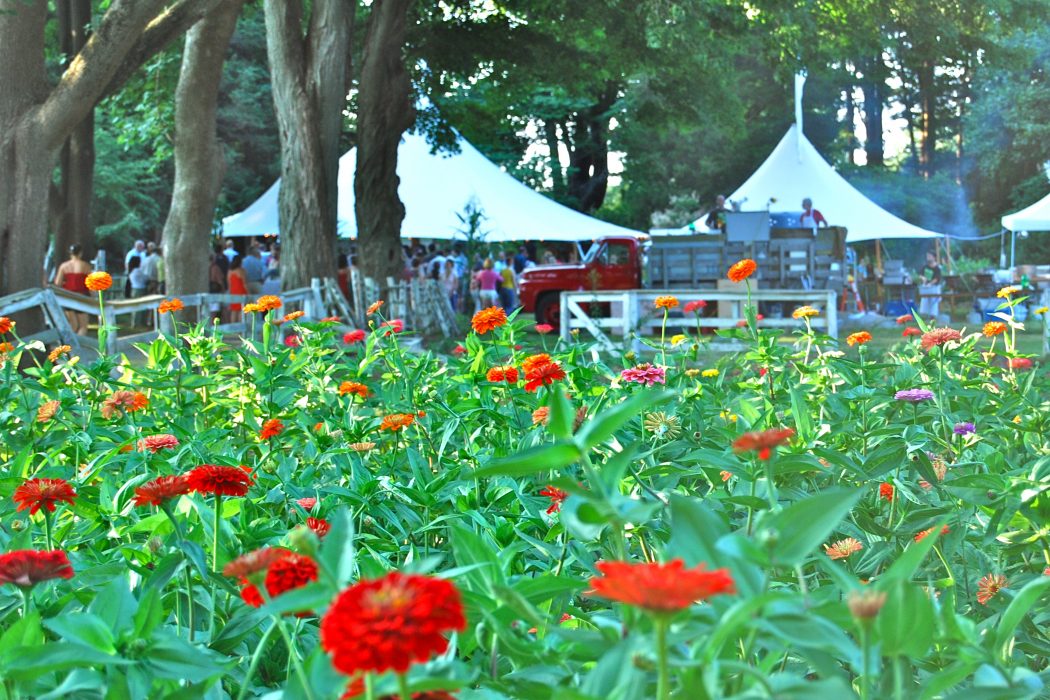 Unlike nouvelle cuisine or molecular gastronomy, the farm-to-table movement is more than just a flash in the pan.

In Southern New England, we’re enjoying a boom in farm-to-table dining, and unlike food fads that come and go, this gustatory preference for all things locally grown and often organic shows signs of putting down permanent roots. It’s an approach to cooking and eating that started on the West Coast, a passion for cooking in rhythm with the seasons that is steadily infiltrating kitchens throughout the rest of the country.

Farm-to-table (aka farm-to-fork and farm-to-chef) cooking is based on core ingredients that include garden-grown vegetables, native seafood and grass-fed beef. The food is tasty and good for you. Buying it supports local farmers, and it’s both aesthetically pleasing and politically correct. But, except in the literal sense, it really isn’t groundbreaking.

“Farm-to-table is just a new name for how people have eaten forever,” says Kimberly Russo, owner of Just Right Farm in Plympton, Mass. “Rather than using gourmet ingredients from around the world, the focus is on what’s grown locally.”

This will be the third summer that Just Right Farm is serving five-course, prix-fixe dinners on weekend nights in a rustically elegant screen house a stone’s throw from gardens sprouting vegetables and herbs. Russo and Elaine Murphy prepare the meals, and what they don’t produce themselves, like seafood, meat and dairy, comes from nearby farms. The setting is neither a formal restaurant nor a table in a field but rather the best of both worlds. “People who come here find out that you can combine the growing of food in a rural area with an elegant, sophisticated dining experience,” says Russo.

While Alice Waters of Chez Panisse in Berkeley, Calif., is most often cited as the first to spark an interest in local harvest-driven dining, perhaps Jim Denevan deserves the most credit for spreading its popularity nationwide. A surfer, sand artist and self-taught chef, Denevan founded Outstanding in the Field in 1999 and in the years since has traversed the country in a bus with his team, preparing and serving dozens of multi-course dinners in collaboration with host farmers and guest chefs.

“Our mission is to reconnect diners to the land and the origins of their food, and to honor the local farmers and food artisans who cultivate it,” says Denevan. “We set up dinner tables in fields, ranches, dairies, vineyards and community gardens across the country for alfresco meals that truly reconnect us with the land and the people who produce our food.”

This summer 75 Outstanding in the Field events will be held in 35 states, including, in our region, dinners at Allandale Farm in Brookline, Mass., and Arcadian Fields in Hope Valley, Rhode Island.

James Mark, cook/owner of North restaurant in Providence, will be the guest chef for the Arcadian Fields event. “Diana’s stuff is absolutely gorgeous,” says Mark of Arcadian Fields’ Diana Kushner, one of several farmers he buys from at the Hope Street Farmers Market in Providence. North’s three cooks and one intern spend one day a week at White Barn Farm in Wrentham, Mass., where, says Mark, “They learn how much work goes into a product before it even hits the kitchen.” Also, for each dish sold at North, the restaurant donates 50 cents to a local food-based charity like the Rhode Island food bank or Amos House, which runs a soup kitchen. “This is the way we feel restaurants should be run,” says Mark, referring to buying local, remaining affordable and remembering the hungry.

In Connecticut, Dinners at the Farm is the first organization in New England to popularize, well, dinners at the farm. Founder Jonathan Rapp is also chef/owner of River Tavern in Chester, Conn.—“pure” is his favorite word to describe what he does. “The farmers love the fact that we transform their products and hard work into an amazing meal,” he says. “We’re all working toward the same goal of promoting local agriculture.”

Dinners at the Farm donates $20,000 annually to support five beneficiaries (organizations and nonprofits that support and preserve area farming), but Rapp says that if you include what they purchase from local farmers, that amount rises to $40-50,000 per season going to help out the community.

But you don’t have to eat dinner in a field or even with a garden view to savor the authenticity, pure flavors and simple presentation that are at the heart of this food movement. Restaurants in every corner of Southern New England alone are embracing the farm-to-table ethos.

Like Rapp, Justin Walker, chef at Earth in Kennebunkport, Maine, is passionate to the point of fanaticism about embracing sustainable cuisine in a region of the country he says is “very dense in small farms.” In 1992, he started the garden at the acclaimed (now closed) Arrows, where he worked for 15 years. For Earth—Boston’s award-winning chef Ken Oringer consults—Walker buys vegetables from three farms located within a minute and a half of the restaurant. Plus, he has bountiful gardens at home, raises goats and chickens and forages hundreds of pounds of mushrooms just on his own property.

“I won’t turn anybody down if they appear at the back door,” says Walker of potential local food suppliers. Thus, you might find on his menu items like black pansy ice cream and day lily buds, and he gets his lobsters only from his father-in-law’s noncommercial boat in Wells Harbor. Even when real family is not involved, farm-to-table ventures tend to have a close-knit feel to them among staff and customers alike.

“The Blue Room has stood for all things local, sustainable, delicious, whole and unique since its inception [in 1991],” says Nick Zappia of the Kendall Square restaurant he bought from Chris Schlesinger in 1996 and now owns with his wife, Liz Vilardi. Schlesinger was a trailblazer in Boston culinary circles; Zappia and Vilardi carry on his farm-to-table enthusiasm not only at The Blue Room but also at their two newer Cambridge-based ventures, Central Bottle Wine + Provisions and Belly, a wine bar.

Come summer, a collaboration with Bay End Farm in Buzzards Bay brings The Blue Room chefs to the Cape to prepare multi-course organic meals paired with organic wines. “You will be sitting anywhere from just a few feet to a few miles from where your dinner will be sourced,” reads the online invitation to these “One Long Table” dinners, “and only yards from where it will be prepared.”

Bay End owners David and Erin Ingersoll are alumni of The Blue Room, where, like Zappia, they were bitten by the farm-to-table bug. “We base our menus on what we have in the garden at the time,” says David Ingersoll, echoing an often expressed tenet by practitioners of farm-to-table, like Chef Tony Maws of Craigie on Main in Cambridge who says, “First we find the ingredients, then we create the menu.” Maws, who will be the guest chef at this summer’s Outstanding in the Field dinner at Allandale Farm in Brookline and was named one of America’s best chefs by Food & Wine magazine, changes his seasonal menu daily and often includes inspired preparations using such ingredients as Maine clams, local cod, forest mushrooms, grass-fed sirloin and especially Vermont pork. Maws gained renown for his early support of local farms and sustainable agriculture. His specialty is using all parts of a pig in his cooking.

Maws is one of a phalanx of chefs worldwide who have enjoyed celebrity status since the 1980s, and now with farm-to-table going gangbusters, farmers are sharing the limelight.

But not everyone is a celebrity. Elise Richer of Portland, Maine, worked at a Massachusetts farm stand as a teenager and has since worked in several restaurants and run her own baking business. Her cookbook, Always in Season: Twelve Months of Fresh Recipes from Farmer’s Markets of New England, which came out last August, is a compendium of largely uncomplicated recipes she serves her family that showcase what’s fresh each month, like carrots, maple syrup and onions in March and beets, blueberries and corn in July.

“I think one source of interest in farm-to-table eating has been consumers’ growing awareness of the industrialization of foodstuffs,” says Richer. “They had not thought about where their food actually came from, so it got them thinking.” Like Richer, the leaders of this food movement do their best to avoid food that’s been genetically modified, packaged in a factory or transported very far.

In the 1980s, Jonathan Rapp, now of Connecticut’s River Tavern and Dinners at the Farm, was one of the first New York City chefs to patronize the Union Square Greenmarket farmers’ market, filling a taxi with fresh produce to cook in his Michelin-starred, Upper East Side restaurant Etats-Unis. Today he celebrates how far he and like-minded chefs have come. “The farmers love the fact that we translate their product—their hard work—into something outstanding,” he says. “We’re working toward the same goal of promoting local agriculture. It’s a win-win for everyone.” Including, maybe most of all, the diners.