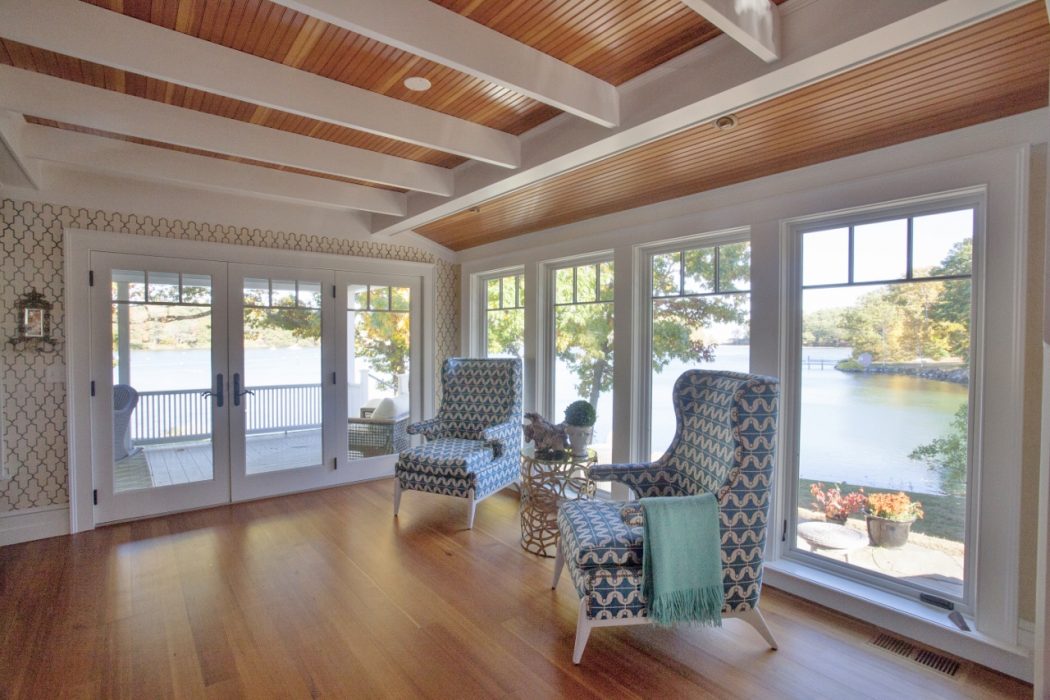 Celebrating the room we all live in.

Today’s living room delivers just what it promises. From TV watching and reading to just plain relaxing, the activities that go on here fall into the general category of “living”—nothing too structured or specific. Even a living room’s location is not set in stone: it can be secluded, like a study, or purposefully open to the kitchen for the full-time “family room” effect. Contentwise, some things have changed, e.g., maximized windows and mounted televisions, but couches, coffee tables and fireplaces still reign supreme. The following examples reaffirm the room’s “comfort” purpose but also showcase its full design potential. 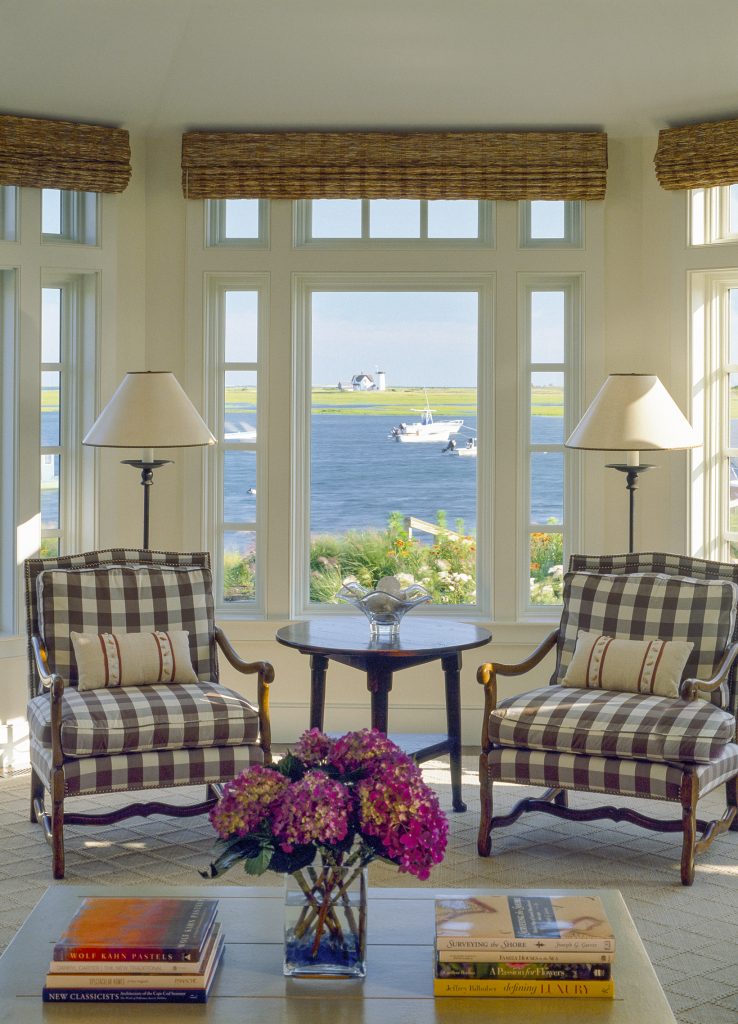 “This Chatham home has a dramatic view, and this living space is equally dramatic,” says John DaSilva, design principal of Polhemus Savery DaSilva Architects Builders. “The room projects out in an octagonal bay, and the bay window follows the bend in the adjacent Oyster River,” he explains. The end result: maximized views and daylight.
Interior designer Suzanne Little oriented the furnishings towards not only the river but also the fireplace. A section of wood paneling next to the fireplace lifts up like a garage door to reveal a hidden television. “The owners wanted the option to entertain a large group with a movie or football game but didn’t want to see such a big television from the dining table or when having a conversation. They also have a quiet den—tucked away from the rest of the house—that is scaled to relaxing for just the two of them,” says DaSilva.
Although the living space is open to the dining room, columns and transom lights imply separation, giving the two areas different character. “You can still see from one to the other; you can still hear what’s going on,” says the architect. “But the living space is tall and focused on the lighthouse and spectacular context outside, while the dining space is cozier and more enclosed. The owners get the best of both worlds.” 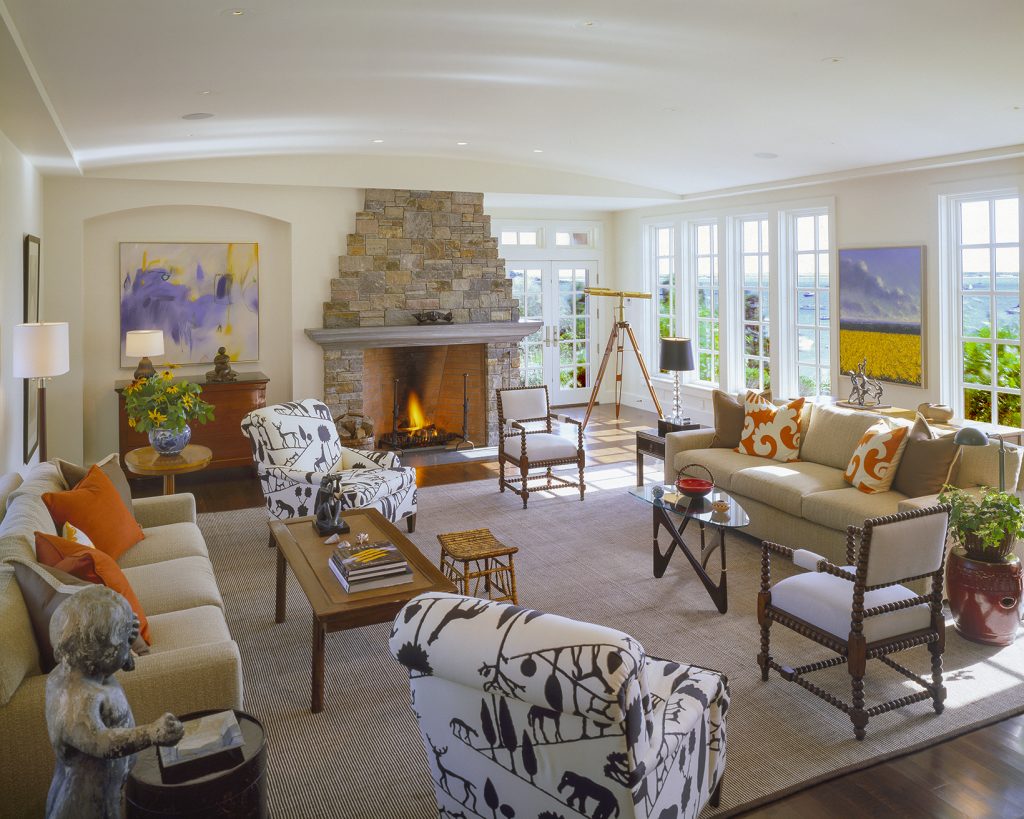 Situated on Stage Harbor near the entrance to Nantucket Sound, this Chatham home, also designed and built by Polhemus Savery DaSilva Architects Builders, takes every advantage of its stunning location. From one linear mass, which faces the street, two wings spread out diagonally towards the water—like half of a butterfly.
Situated at the end of one of these diagonal wings, the home’s formal living room enjoys multiple exposures to sunlight and views. It boasts an impressive curved ceiling dotted with miniature recessed lights.
“We created extra ceiling height by lowering the space a few steps down from the adjacent dining room,” says architect John DaSilva, adding that the site’s slope towards the water allowed for the sunken effect.
Thoughtful architectural details like a wall niche not only break the room’s large scale down into smaller pieces, notes DaSilva, but were also carefully orchestrated to showcase particular art and furnishings. “The homeowners are both steeped in art and design. The wife is an interior designer who did the interior work herself and the husband runs a classic furniture manufacturing company,” he says. 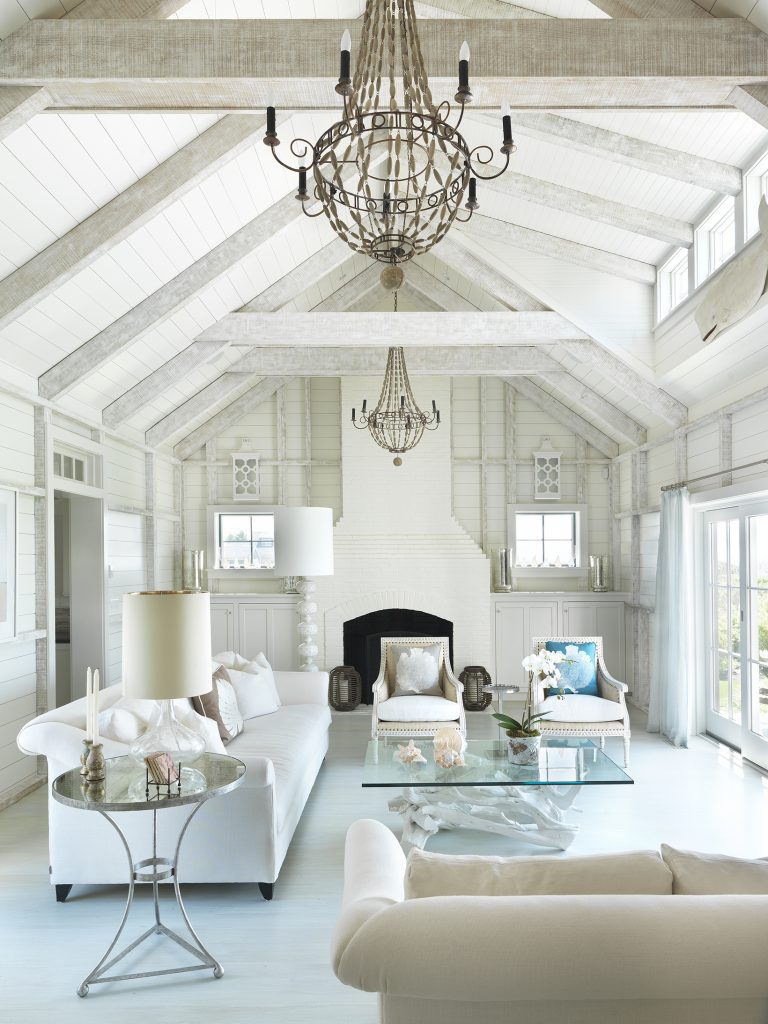 After finding just the right piece of Surfside for sale on Nantucket, a family of four assembled a team of island-based designers to realize their dream of a casual vacation retreat with a sophisticated edge.
“The idea of a classic beach cottage that has evolved over time was the storyline of this house,” says Joe Paul of BPC Architecture. The architect designated the living room as the new home’s “oldest” part. Exposed studs and rough-hewn oak rafters, all hand-rubbed with pigment stain to make them look timeworn, contribute to the aged appearance.
Instead of drywall, horizontal wood paneling, painted in Benjamin Moore Harbor Haze, evokes the look of Surfside’s classic beach cottages. Throughout the first floor, similar horizontal paneling varies in width, expressing “the transition from one ‘era’ of the house to another,” Paul adds.
Interior designer Donna Elle settled on a palette of whites, soft blues and greys, pulling colors from the surrounding landscape. Artistic furnishings, such as the driftwood coffee table by Miami artist James Duncan and repurposed wine barrel chandeliers, fulfill the owners’ quest for “beach chic” tempered by a lived-in spirit. 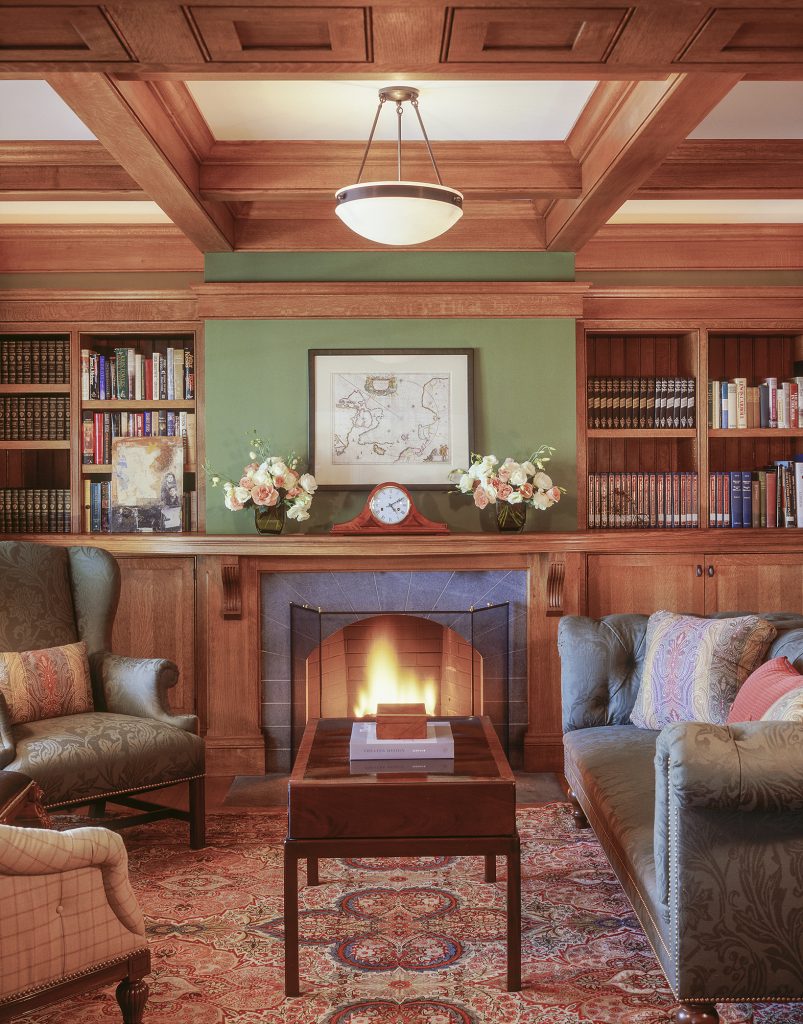 “When I was growing up, I remember neighborhood kids who had living rooms that no one entered,” recalls architect Sally Weston of Sally Weston Associates. “But when I design a new home today, I want the occupants to use every single room, often for multiple purposes.”
The owners of this summer home on the Mid-Cape wanted a quiet living room for entertaining, reading, talking and just relaxing. The architect designated a second, more relaxed family room for TV watching, so this more formal version is flatscreen-free.
Flanked by illuminated display cases, the gas fireplace can be quickly turned on or off, notes Weston. Although the room is open to the dining room, an elliptical arch with pilasters helps demarcate the two areas. A second archway creates a similar sense of transition between the living room and formal entry.
“Not too long ago, owners were building massive spaces with cathedral ceilings, and no one felt comfortable in them,” asserts Weston. “This room has nine-and-a-half-foot ceilings but does not feel extraordinarily large. It’s a beautifully detailed room whose modest scale is welcoming.” 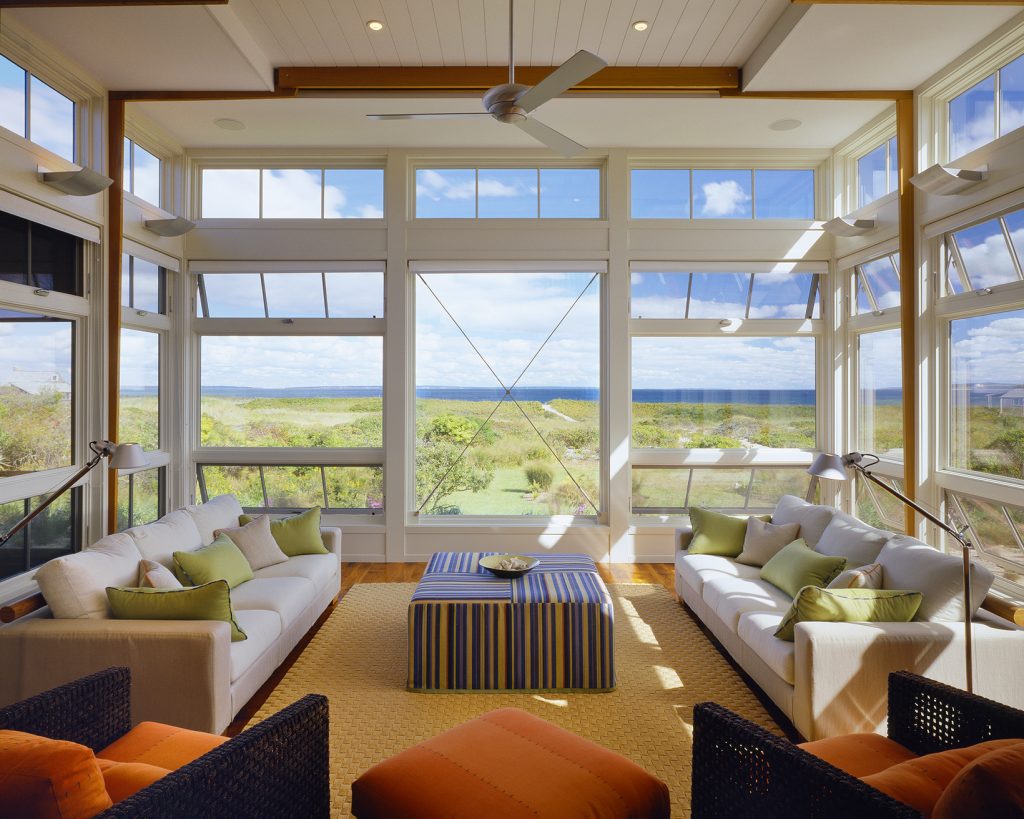 Designed by Hutker Architects, this contemporary Martha’s Vineyard home was sited just off the beach, capturing views that are, in a word, spectacular. “At only 2,400 square feet, the house is like a modern-day version of a beach cottage,” explains Project Principal Phil Regan. “The kitchen and dining and living areas are all in one wide-open space.”
The living room is more of a “beach room”—floor-to-ceiling windows ensure that it feels connected to the beach every day, year round. Large central windows are fixed and, without dividers or screens, provide unobstructed sightlines. Operable windows above and below allow for passive ventilation (cool air enters low and warm air releases up high).
An “X” marks the room’s central fixed window for good reason: “That’s a structural cable,” reveals Regan. “It acts as a resistor to stabilize the building’s end against wind pressure.
“It’s surprising and interesting that this contemporary house is not just filled with slick, polished materials,” he continues. “Impositions of wood in the ceiling and walls are reminiscent of the area’s old beach cottages, and the reclaimed fir floors are about 100 years old.” 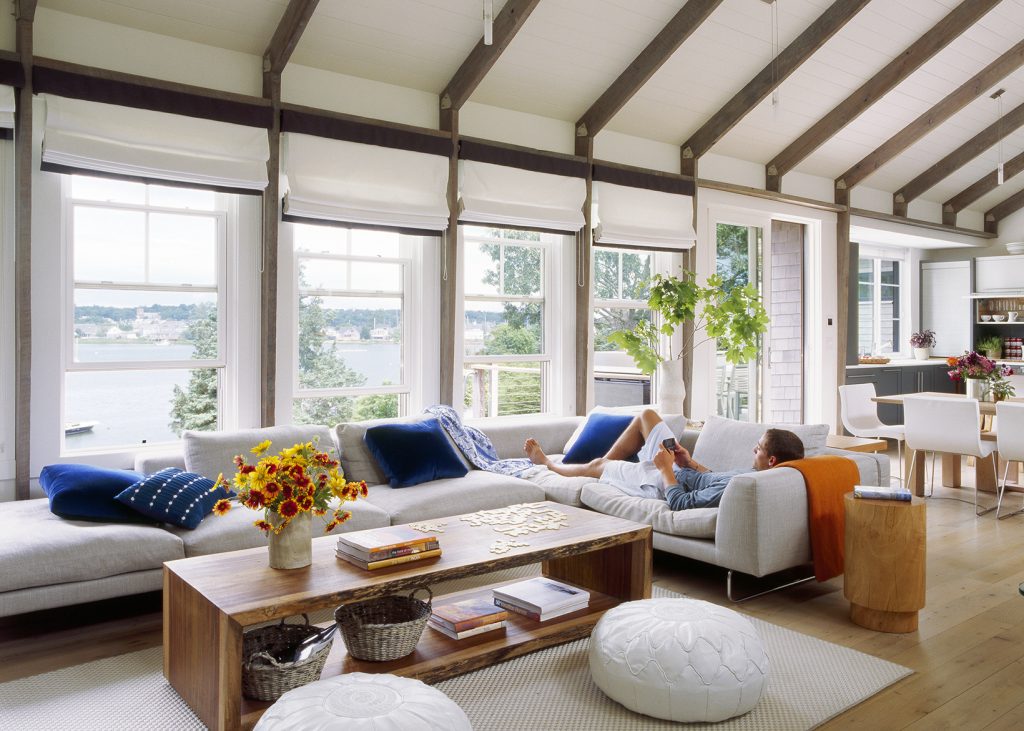 “Many of our clients come to Martha’s Vineyard to separate from the working world and relax—they want to enjoy their family all together in one space. Our projects tend to head towards the open living concept because of the island’s casual nature,” explains architect James Moffatt of Hutker Architects.
For a harborside Vineyard home, Moffatt and his team created one long, window-lined main living area. “The owners really love the mix of rustic and modern, so we started playing with the idea of a found ‘shell’ outfitted with modern elements,” he says.
The area’s overwhelmingly rustic ingredients—oak flooring and exposed rafters and beams—are all reclaimed. Painted V-groove poplar between the rafters keeps the high ceiling looking light and airy. Contemporary infusions include the kitchen cabinetry at one end and a smooth limestone fireplace at the other as well as some furnishings and light fixtures in between.