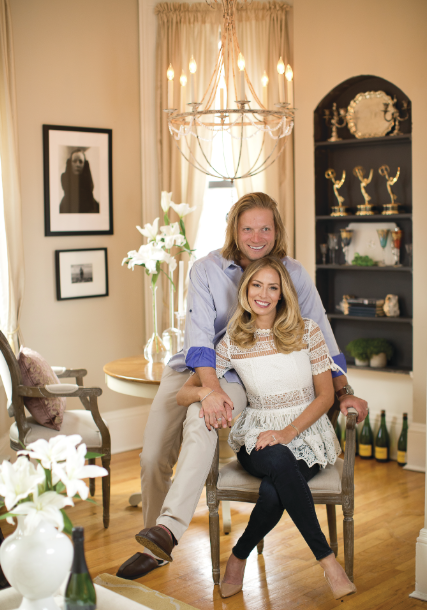 Inside the one-bedroom Back Bay apartment that TV personality, producer and entrepreneur Jenny Johnson shares with her husband, writer and editor Robert Cocuzzo, they’ve learned the art of living with less.

The one-bedroom Back Bay apartment that TV personality, producer and entrepreneur Jenny Johnson shares with her husband, writer and editor Robert Cocuzzo, is a treasure chest full of memories and mementos that the two cherish. Look out one of the large windows framed by a scallop-edged wooden border and one sees the Boston Public Library, where the couple was married last fall. Peek out another window and there is a full-on view of the bar where six years ago they had their first date, the location of which was no coincidence, says Cocuzzo, who maintains that his future wife wanted to check him out (from the window of what was then her apartment) to determine whether to keep the date.

The two had met briefly a month earlier at a charity event on Nantucket that Johnson was hosting and Cocuzzo was covering for Nantucket Magazine, which he serves as editor. While she was focused on the event, Johnson says she remembers thinking, What a handsome, dynamic guy. And while he found her to be attractive and likable, he also thought she was “way above my pay grade”—hence the full month it took him to muster the courage to call her. Yet six years later, after a romantic proposal on a summit in Iceland, and their wedding at the BPL, which is where Cocuzzo wrote his first book (and is now working on his second)—and which he refers to as his “pseudo office”—they enjoyed a lengthy honeymoon in Nepal that included hiking, one of their favorite pastimes.

The local couple—she lived in Worcester until she was 13, then moved to Marblehead, and he was raised in Arlington—say they thoroughly enjoy city living, especially in the Back Bay. “I love the easy access to everything, the accessibility to fitness options if I want to do yoga one day, pilates the next day, boxing the day after…it’s all right here,” says Johnson, 35, cohost and producer of NESN’s Dining Playbook. “I also love the access to the flavors of the city, whether it’s [a restaurant that is] rated most popular on Zagat or a place nobody’s ever heard of. And I love the people of the city; there’s a real community feel.”

Looking relaxed and youthful in an oversize sweater with her legs tucked beneath her as she sits comfortably on her living room couch, Johnson is warm and personable, easily slipping into the role of the interviewee rather than the more familiar interviewer. She points to one of the spectacular pieces of art that adorn the walls and proudly explains that it was painted by her uncle, Harold Rotenberg, “a prestigious American impressionist who lived to be 105 and traveled and painted around the world.”

Johnson says his wife, her aunt Fay, was founder of the Newbury Street League, a nonprofit business association. “In fact, she was one of the faces painted on the old Dartmouth Street wall, which you could see from our apartment window,” Johnson says proudly. “It’s one of the reasons I feel so connected to the Back Bay.”

Since there isn’t a lot of space in the apartment, especially now that it’s shared by two, Johnson says she and Cocuzzo, 31, are mindful of what stays and what goes. What stays are things that are important to the couple: her uncle’s painting, and another of a village in Italy from where Cocuzzo’s family emigrated nearly a century ago. It was a wedding gift from the artist, Sergio Roffo, a childhood friend of Cocuzzo’s dad. “Last March, Rob and his father bicycled to the village from Florence, an adventure which has become the subject of his next book,” Johnson says, smiling with affection at Cocuzzo, who is seated nearby and adds that while he, too, enjoys looking at the oil painting and remembering the trip with his father, it also reminds him that “I’ve got to get to work” on the book.

Johnson says she enjoys home décor and leans heavily on “the two wonderful Andreas in my life.” The first is interior designer and longtime friend Andrea Hutchins, a former set designer for This Old House. “Once a quarter, she comes over, we open a bottle of wine and move the pieces around my apartment,” says Johnson. “She’s helped me realize that you shouldn’t hold onto something unless it speaks to you and has a story worth sharing.” She says that Hutchins has done “wonders” incorporating pieces from local businesses. For example, her throw pillows and Venetian glassware are from Alan Bilzarian, and her ottoman tray, coasters and gold bookends from Portobello Road, “a female-run business that I love,” she says.

The other Andrea is Andrea Haliday, owner of Table and Tulip, who, Johnson says, “brings my space to life with her stunning array of flowers.”

“I don’t have much of a green thumb,” she admits, “so Andrea loads me up with beautiful flowers that don’t require a lot of TLC. Andrea also decked out our wedding. She’s an incredible talent.”

Also on display are the three Emmy’s that Johnson has received: one for her work on NECN’s TV Diner and the other two for Dining Playbook. (Hutchins insisted that they not be hidden away, “or used as doorstops,” Johnson says with a laugh.) There’s also a scale that she refers to as “the scales of justice,” that once belonged to her grandfather, a prominent Massachusetts judge; it sits on the mantel and reminds Johnson that she needs to “seek balance in my life.”

Not an easy task for the high-energy entertainment and lifestyle TV personality, who is also involved with many charities and has partnered with a winemaker in California to create a sparkling wine, Champy.

“I am always yelling at Jenny because she just won’t stop,” says her longtime cohost and close friend Billy Costa. “She’s the hardest working person I know.”

Johnson doesn’t seem to be slowing down at all, as she tapes a new season of Dining Playbook and promotes Champy. “I have a great appreciation of the nuances that go into the hospitality industry, and I’ve loved being able to promote the intense, constant work that goes into developing a brand and the service industry in general,” Johnson says when asked why she decided to embark on this new endeavor. “I was always sort of fascinated with the business side of things and had some expertise in branding and marketing. So when I met Penny [Gadd-Coster], who had expertise in wine-making, we decided to partner together to launch Champy.”

Johnson, a longtime fan of bubbly drinks, says that sparkling wine has traditionally been reserved for special occasions—a trend she hopes to reverse. “We want people to think of sparkling wine as something you can enjoy on any occasion because what it does is it transforms a typical experience and makes it an extraordinary one,” she says of the chardonnay and pinot noir blend produced in Sonoma County, California, and so far sold only in Massachusetts stores and restaurants. “This is a drink to sort of kick back, remind yourself that life is precious and worth making memories. This is a wine that you can drink with whomever you are looking to connect and it will be a celebratory connection.”

“Don’t wait to celebrate,” chimes in Cocuzzo, whose comment is met with a big smile and a nod of approval from Johnson. “That’s right, babe,” she says, giving him an affectionate hug. “This is my literary genius over here.” With that, she grabs her coat and prepares to rush out the door, where an Uber driver is waiting curbside to take her to an evening event in the South End—this after a full day of work.

“We’re going to New Hampshire this weekend to totally unplug,” she says, almost defensively. “Rob has helped me immensely to realize that it’s necessary to have regular down time—something that doesn’t come naturally to me. He reminds me to take a deep breath, take a step back and sort of recalibrate, which has been great for my overall well-being.”