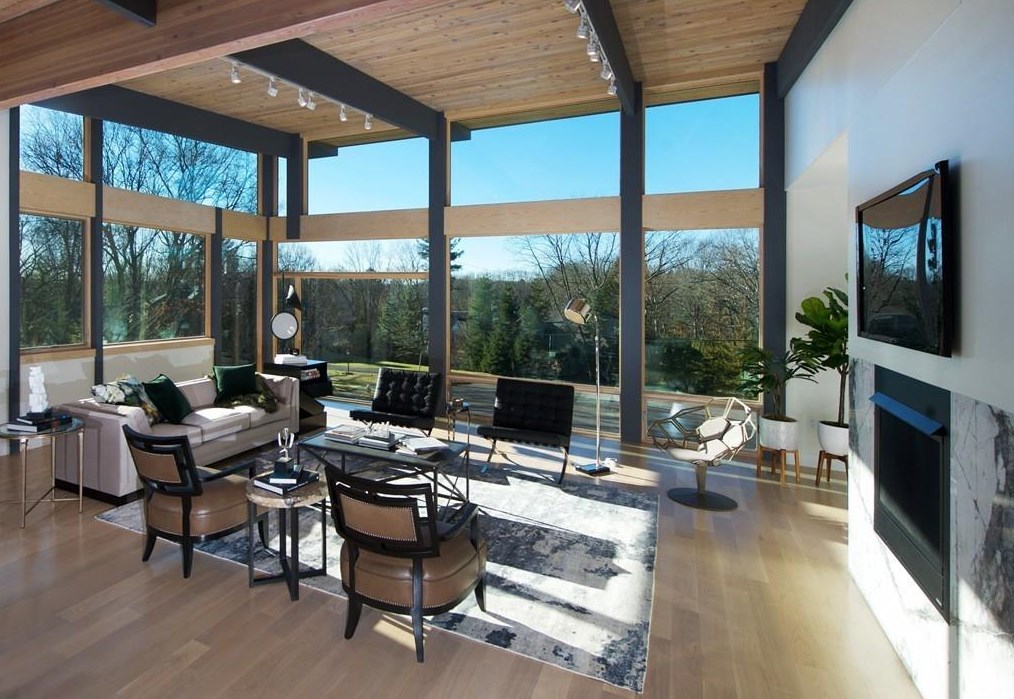 “Single-family homes have become a passion of mine, “ says Bill Caulder, principal at 6M Development and the force behind a newly built modern home in Wellesley. “I’ve been a developer for more than two years, doing lots of multi-family construction in and around Boston, but I’ve started doing single-family homes recently, putting my own ideas down on paper.”

Caulder initially conceived the idea for 10 Scotch Pine Circle; then brought on the architecture/build firm Acorn Deck House to design it. “I wanted to do something different – something out of the box – especially for the area,” he says.

Another 6M Development home, built in a more traditional style nearby, sold halfway through construction. Caulder knew that Scotch Pine Circle is in a highly sought-after area with larger-than-average lots for the town, but he also knew the 5,500-square-foot contemporary would be a one-of-a-kind structure in the neighborhood. “It’s not a home for everyone,” he says. “But someone with a refined taste for modern living will appreciate its nice balance between form and function.”

Constructed less than a year ago, the home features phenomenal floor-to-ceiling windows on the main floor, five-inch-wide white pine flooring, and a floating staircase. The interiors, designed by the Boston-based design studio ID8, complement the structure’s modernity. “The materials and finishes add warmth,” says Caulder. “We infused Scandinavian style into the look and feel, but we also have Italian-influenced cabinetry in all bathrooms and the kitchen.” With channels instead of handles or pulls, the drawers and doors contribute to the home’s overall clean, European aesthetic.

While the open-concept design includes a spacious first floor with connected kitchen, dining, and living spaces, the bedrooms are more traditional. There are master suites on the first and second floors, three additional guest bedrooms on the second floor, and five and a half baths. A lower level includes another bedroom, exercise room, and mudroom. The wide driveway, bordered by a stone embankment, leads to a three-car garage. Smart home automation and security are the finishing touches on this singular home.

Offered by Coldwell Banker Global Luxury, 10 Scotch Pine Circle is listed at $3,179,000. Melissa Dailey is the listing agent and this home is another example of her diverse and robust portfolio. “Melissa’s ability to market and sell some of the most exquisite properties throughout Greater Boston is one the many attributes that attract buyers and sellers to her,” says Susan Ausiello, branch manager and vice president of the Coldwell Banker Residential Brokerage Wellesley sales office. “This luxury home is truly unique compared to other listings in the community.”