The South Portland episode of New England Living TV is a celebration not only of exquisite architecture, interior design, and gourmet cooking, but of the city itself. Originally part of Cape Elizabeth, which its name belies, South Portland is very much a destination unto itself. Restaurants and bakeries – Host Parker Kelley visits three bakeries in this episode! – hotels and a scenic shoreline all work together to make South Portland a desirable location for its 25K residents as well as the thousands of vacationers who flock there each year. 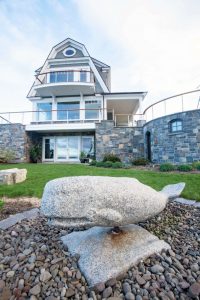 The home featured in this episode is set on a spit of land that juts out into Casco Bay. The new 3,100-square-foot home, owned by not-quite empty-nesters Norma and Sam, offers ocean views on three sides. Designed by Architect Travis Kinney, AIA, of Gulf Shore Design, nearly every room is afforded a view of the water and the three lighthouses that dot the shore.

Immediately after arriving, Sam takes Parker on a tour of their beloved town which includes visits to two bakeries as well as Sam and Norma’s favorite dog-friendly beach. Back at the house, the couple takes Parker on a tour. Second only to the stellar views of the ocean is the exquisite millwork found throughout the home which was handmade by Saco Manufacturing & Woodworking. Norma explains to Parker that it was important that they utilize local companies wherever possible when building their home and, when looking at Saco Manufacturing’s work, it’s clear they made a great decision.

While touring the home, Norma and Sam joke about their differing opinions on how much woodworking to include around the windows. Sam wanted the view to take center stage; Norma was leaning toward more, more, more woodworking. Their compromise was to go with large, plate-glass windows topped with multiple-paned transoms. Beautiful! 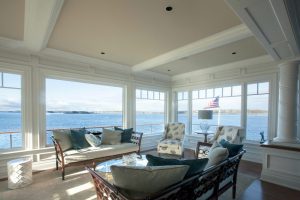 The second-story master suite includes yet another wall of windows as well as a private balcony overlooking the rocky coastline. While on the second level, Sam and Norma show Parker a secret door hidden behind a bookshelf. It proves irresistible to Parker who exclaims, “That’s awesome!” as she gives it a try. Youngest son Ben, the only child remaining at home, takes over the tour when it’s time to check out the lower-level entertainment room which includes a ping pong table and a room for Ben’s drum set.

Later in the episode, Parker visits Saco Manufacturing and spends time on Norma and Sam’s private beach chatting with Travis Kinney about his design for the home and how he worked to maximize the stunning locale. She, Norma and Sam then jump on a ferry to Peaks Island where they enjoy a meal at the Cockeyed Gull. 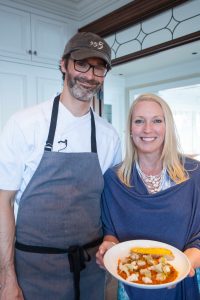 The following morning finds Parker aboard the Lucky Catch with Chef Kyle Robins of five fifty-five, a popular Portland restaurant, pulling lobster pots in hopes of scoring enough lobster for that evening’s dinner. That afternoon Parker heads to Rosemont Market & Bakery to pick up fresh-baked bread and wine for dinner. As guests begin to gather on the terrace, Parker assists Kyle in preparing a risotto-style bouillabaisse which includes lobster from their successful endeavor earlier that day.

This is New England living at its finest!