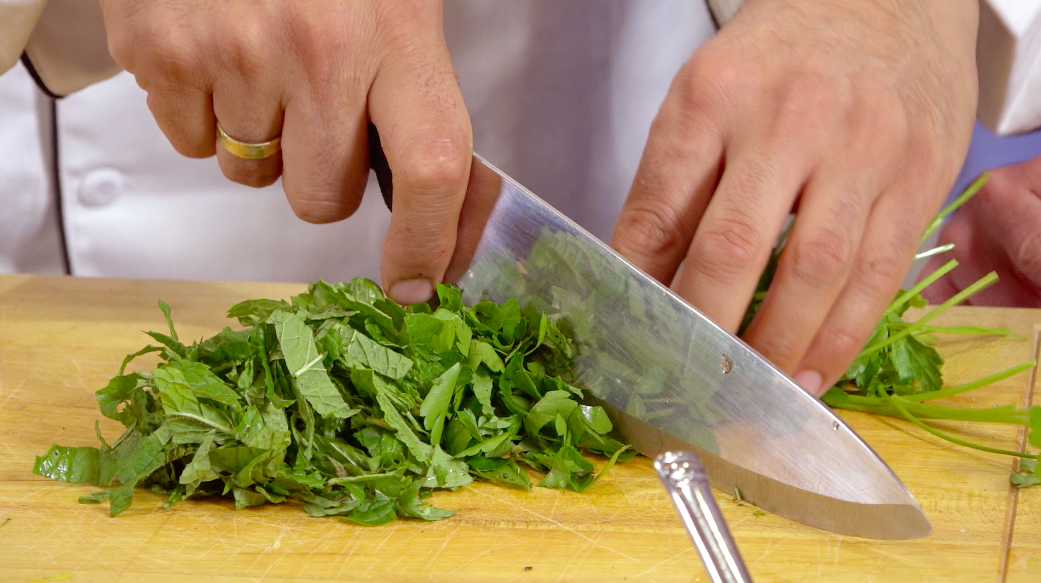 Chef Carlo Berdahn runs Yella Grille with his wife Danielle. The restaurant located in Andover, Massachusetts, has received a number of accolades, including most romantic restaurant. “Nothing makes me happier than making our guests feel happy, at home and welcome,” he says. Berdahn grew up cooking with his mother in Lebanon, and he learned from her that ingredients should always be fresh and in season. The preparation the meal was very important—he still makes everything from scratch, but equally as important was the gathering that resulted. “Food was like going to church,” he says of his childhood. “Breakfast, lunch and dinner you had to be there all the time.”

Berdahn shared a collection of his recipes, which were featured in Episode 12 of Season 2.

Directions
Place 2-inch pita squares into hot oil. Let stand 30 seconds or until golden brown . Remove from oil and drain in a strainer. In a bowl combine romaine, tomatoes, cucumber, mint, parsley, radishes and onion. In a separate small bowl, whisk together olive oil, garlic, sumac, lemon, season to taste with salt and pepper. Drizzle over the salad mixture and toss. Garnish with the fried pita bread.

Directions
To make pesto oil, combine 4 tablespoons olive oil, 1/2 cup basil, 1/2 cup cilantro and 1/2 Italian parsley bunch in a blender. Add lemon juice, 1 clove of the minced garlic, and 1/4 cup water. Add salt & pepper to taste. Set aside.
To make parsnip puree, combine peeled and cut parsnips, 1 cup water, 1/4 cup sugar and salt and pepper to taste in medium saucepan. Bring to a boil over medium heat and cook for ten minutes. Add heavy cream and continue to boil for 6 minutes. Remove from stove and use an immersion blender to thoroughly combine.
To make the succotash, grill corn until tender and remove from cob. Combine the corn, trio of diced bell peppers, remaining 3 cloves of minced garlic and salt and pepper to taste. Add the remaining tablespoon of za’atar, ¼ cup chopped cilantro, and 2 tablespoons of the prepared pesto oil. Sauté all together over high heat for 5 minutes.
Rub the cod tenderloin with 1 teaspoon za’atar, salt and pepper. Heat 1 tablespoon olive oil in a sauté pan over high heat until the oil begins to smoke. Sear the cod until golden and crispy for four minutes on each side without touching it. If the cod is on the thicker side, bake in a 400-degree oven for five minutes. If it is on the thinner side, finish in the sauté pan. Drizzle with 1 tablespoon of the prepared pesto oil once cooked.
To serve, dress plate with parsnip puree, layer on succotash, and finish with the cod tenderloin on top. Garnish sparingly with the diced cooked asparagus and pitted, halved kalamata olives.

Directions
Preheat oven to 350 degrees. Roughly cut purple potatoes in quarters. Add salt to taste, alongside 1 tablespoon of olive oil. Spread evenly across a sheet pan. In the 350-degree oven, roast for 20 minutes or until tender. Set aside.
In a large mixing bowl, combine the sliced summer squash, sliced zucchini, cut red pepper, sliced red onion and tomato. Add salt and pepper to taste, and 1 tablespoon of olive oil. Spread evenly on a sheet pan, and roast in the preheated oven for 12 minutes or until al dente. Set aside.
Prepare the lamb chops. Clean off the fat, leaving just a small amount. Lollipop the meat into 8 pieces, putting the knife between the bones. Salt & pepper generously, and set aside.
In a large saucepan, sauté 1 tablespoon olive oil over medium heat. Sauté the sliced Vidalia onion until soft. Add the 2 cups of mushrooms, and sauté all together over high heat. Add the cooked purple potatoes, the remaining 2 cloves of minced garlic, and chopped cilantro and heat thoroughly. Add salt and pepper to taste. Set aside.
Heat 1 tablespoon olive oil over high heat in a medium sauté pan. Sear the lamb chops for 3 minutes on each side for medium rare. Add in 3 cloves of the minced garlic, sauté for 1 minute, then add the juice from 1/2 lemon and the pomegranate molasses. Cook one additional minute. Garnish stacked vegetables with sprigs of fresh rosemary through the centers. Plate lamb chops alongside potatoes and vegetables.

Directions
Whisk together egg yolks, whole egg, and 11 tbsp sugar. Add vanilla. Set aside.
In a pot over medium heat, combine heavy cream and orange zest. Heat until just about to boil. Remove from heat. Melt chocolate into heavy cream. Whisk about 3 minutes to cool. Pour chocolate mixture gradually into egg mixture, you don’t want to heat the eggs too quickly. Stir to combine. Strain mixture, and pour into serving dishes. Recipe will fill about six 8-ounce containers. Place dishes into hotel or cake pan, and fill pan with about an inch of water. Bake at 350 degrees about 40 minutes, until centers set. Chill before serving.
When ready to serve, mix together remaining sugar and brown sugar. Sprinkle 1/2 tablespoon of sugar mixture onto each dish. Torch or broil on high until sugars caramelize.