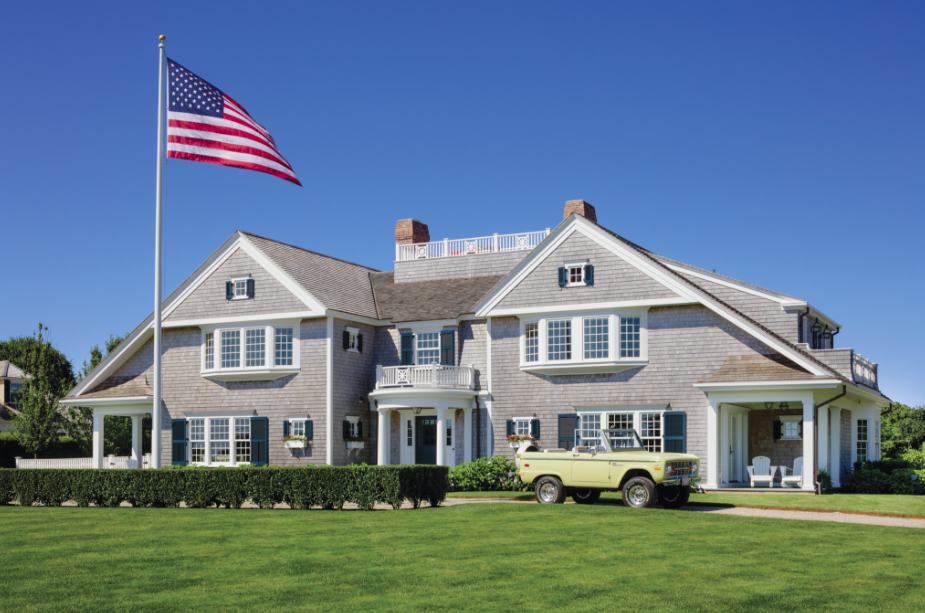 A beautiful Cape Cod home hearkens back to the early 20th century.

When a couple with a lifelong history of summers spent on Cape Cod bought a prominent property in Chatham and hired Patrick Ahearn, a Martha’s Vineyard- and Boston-based architect known for historically sensitive designs, they thought they would renovate the early 20th-century home that already stood on the site. But after further investigation and consulting with a building inspector who said there were “structural deficiencies beyond repair,” a full demolition was called for. However, the Chatham Historic Commission granted full approval to execute the proposed design intent, albeit all new construction.

Ahearn felt strongly that “whatever we did had to hearken back to the 1910s when the original houses in the area were built as opposed to those built in the 2000s, which can be volumetric. We wanted to preserve the integrity of the house.”

His clients had presented him with an ambitious wish list. They wanted a main house large enough to accommodate their family, which includes three children, a guesthouse, a carriage house, as well as a pool and hot tub. Ahearn succeeded in satisfying the wish list all within the original home’s stature and on a scale and with a form reminiscent of the turn of the century.

The architect used vestiges of the original façade as the inspiration for his design, saying that they “elected to base the new design on the original to preserve the character and history of the streetscape.” The street-facing facade of the house presents symmetrical wings, each with a set of bay windows, twin chimneys, and paired north and south porches, all cozying up to a Richardson Romanesque meets Shingle Style round balcony portico.

The reclaimed brick veneer on the foundation, chunky, heavily detailed trim, copper downspouts and cedar shingles that will weather to gray, all contribute to the home’s illusion of age. With its prominent American flag, its broad, elegant lawn leading up a parking court, and the home itself set well back so that it would not dominate the street, the property presents a stateliness and a timelessness that enhances the community of which it is part.

Ahearn’s design feels authentic in its context while offering the family the space, views and privacy they desire in a home currently used seasonally, but which his clients intend to live in year round in the future. “Once you open the front door,” Ahearn explains, “a sequence of events unfolds— you can go through the house out to the terrace and fire pit without having to traverse through the living room.” Just beyond the terrace, the fire pit, the pool, and the hot tub, a secondary structure serves several purposes: A pool cabana, guesthouse, and a carriage house for the family’s vintage automobiles.

Typically just a pass-through, the foyer has become a favorite space, says the homeowner. “It’s another room for people to relax in. The breeze flowing from the ocean makes the room the perfect place to read a book or indulge in conversation.”

Another distinctive feature is the floors. In the main living spaces, they are hickory, which can stand up to heavy dog traffic. Also hardy is the reclaimed brick used for the mudroom, where built-in cubbies and window seats covered in American flags make for a space both utilitarian and patriotic.

This flag motif recurs in an area rug upstairs and in accent pieces in the first-floor study, where handsome walls clad in fir are naturally complemented by a rich blue paint, a selection suggested by the home’s builder, Doug Whitla of Whitla Brothers Builders, who was instrumental in the selection of various materials.

The water and sand inspired all of the home’s interior choices. “A lot of the design revolves around bringing colors from the beach, the ocean and the sand into the home,” says the homeowner. The blues, sands, grays, and crisp and marbled whites of the fabrics, furnishings, marble counters and tiles, “tie back into the idea of the colors mirroring the beach,” she says.

Another crowd-pleaser is the nautically-inspired curved bar, sitting strategically at the edge of the living room and next to French doors that lead to one of the two side porches. This leaves the basement free to accommodate several other activities, including a playroom, exercise room and wine cellar.

Mariner traditions inspired many other facets of the house, including the ship’s ladders leading to lofts in the three children’s bedrooms and the floating circular staircase with its rope railing that leads to the broad widow’s walk. From this vantage, the views of sea and shore are unencumbered. Ahearn has seamlessly married past and present.