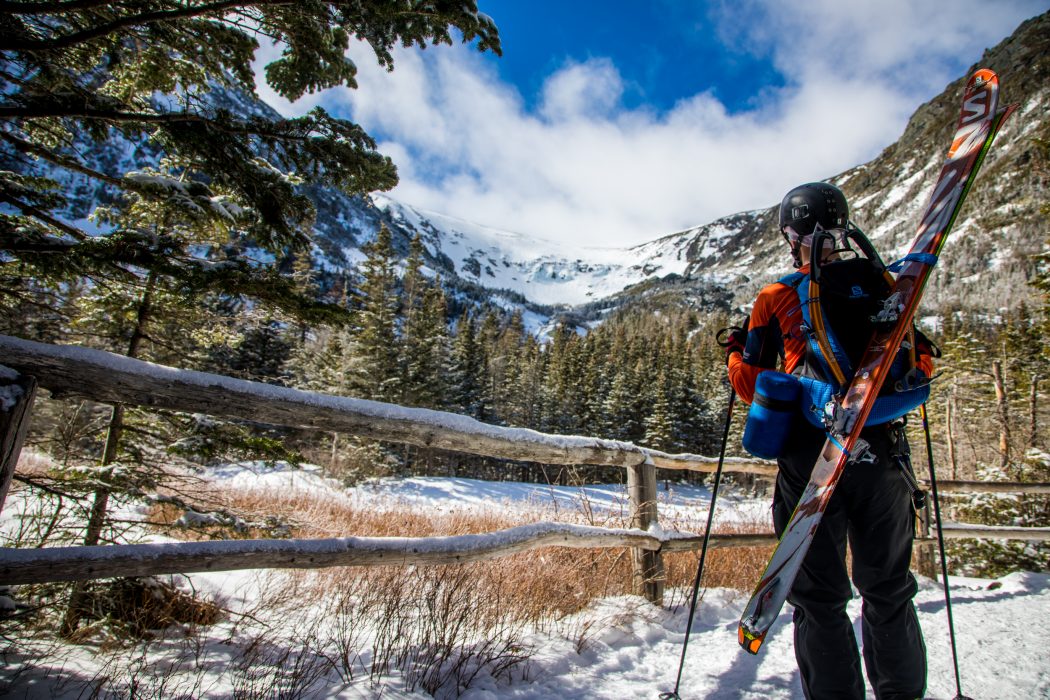 Skiers and snowboarders get back to their roots in Mount Washington Valley.

During the Great Depression, President Franklin D. Roosevelt established the Civilian Conservation Core (CCC) to put people back to work. Wielding shovels, sledge hammers and axes, hundreds of thousands of young men built bridges, paved highways and logged forests as part of Roosevelt’s New Deal work relief program. In New England, a band of CCC lumberjacks were sent into the White Mountains to clear-cut ski trails, which intrepid skiers went on to schuss down for decades. When chairlifts and ski resorts became popular, these backcountry ski trails were relegated to the history books where they were almost completely forgotten about—almost.

Since September 2016, Tyler Ray and a devoted band of skiers and snowboarders have reclaimed a number of these forgotten ski trails and expanded the backcountry skiing access in the White Mountains. For the uninitiated, backcountry skiing takes place outside the resorts, away from chairlifts and ski patrol, where skiers and snowboarders “earn their turns” by hiking up the mountains they intend to ski. Backcountry enthusiasts have long flocked to New Hampshire’s Mount Washington to ski its steep eastern face known as Tuckerman Ravine, but Ray wanted more options to get into the backcountry.

“I needed shorter ski tours to squeeze in during morning or my lunch hour,” said Ray, a lawyer who moved to North Conway from Boston in 2014 after too many long afternoons scrolling through skiing photos at his desk in the city. Inspired by a group in Vermont who devised a way to legally cut their own ski trails into public land, Ray formed the Granite Backcountry Alliance to reclaim and restore some of the long-forgotten ski trails and make them accessible to today’s skiers and snowboarders. Relying on his law degree to navigate some of the tricky legal implications, Ray coordinated his group’s efforts with federal land managers, state entities, private land owners and land trusts to create new community-supported backcountry access in New Hampshire and Maine. “The movement caught swiftly and has completely changed the course of the backcountry community in a more positive direction,” Ray said.

During the summers, Ray enlists groups of volunteers whom he affectionately calls “Quarry Dogs” to haul chainsaws, hedge clippers and rakes up into the mountains to help clear and maintain the trails much like the CCC lumberjacks did all those years ago. Through blood, sweat and mosquito bites, the Granite Backcountry Alliance has carved out five backcountry skiing zones while also cultivating a thriving backcountry community. “The culture fostered by GBA is a dynamic balance between chasing adventure, playing smart and being a good neighbor,” Ray described.

Another leader of this budding backcountry community is Andrew Drummond. A backcountry skier and endurance athlete, Drummond is the founder of Ski The Whites, a gear shop and apparel company based in Jackson, New Hampshire. “Ski The Whites was started because I wanted to share my love of backcountry skiing with others and help them overcome all the barriers involved,” said Drummond, who has become an expert in all things backcountry to help others safely recreate in the mountains. “When I reflect on the first few years in this business, the values have always centered around introducing people to backcountry skiing, all while making time for myself to keep skiing and exploring our mountains.”

With a new storefront in the village of Jackson as well as a ski shop at nearby Black Mountain, Drummond has not only helped outfit local backcountry skiers, but also has joined Ray in fostering a backcountry community complete with a weekly uphill skiing competition called Friday Night Lights. Beginning at 7:00 p.m., skiers hike Black Mountain by headlamp using skins on the bottoms of their skis to ascend 1,500 vertical feet and then they ski down. Friday Night Lights culminates at the end of the season with a gut-wrenching sufferfest known as the Last Skier Standing.

Drawing athletes and mountaineers from all over the country, the Last Skier Standing is an endurance competition in which skiers hike up and ski down Black Mountain once an hour, every hour until there’s only one person left standing. “It takes equal parts fitness and mental strength,” described Drummond, who originally got interested in endurance races after competing in the Tuckerman Inferno, a historic pentathlon where athletes run, bike, paddle, hike and ski up, down and around Mount Washington. “I couldn’t believe our first year we managed sixty-five participants and everyone impressed me with how far they pushed themselves.” Last February, a fifty-eight-year-old named Rick Chalmers won the competition after thirty-three hours and thirty-seven minutes. This winter’s competition is slated to be held again in February.

For those who might not be interested in braving the backcountry or skiing thirty-three straight hours in the frigid cold, Mount Washington Valley is home to more than a dozen ski hills that hark back to the early days. “The White Mountains have several mountain ranges, with the Presidential range being the most heralded and rightfully so,” Drummond said. “But if you broaden your scope, you’ll find skiing in just about every nook.” Most recently, Vail Resorts purchased Wildcat Mountain—a throwback ski area that looks directly across at Mount Washington’s Tuckerman Ravine. Although locals are still waiting to see what updates the new ownership might bring to the resort, they can rest assured that the surrounding mountains aren’t going to be changing anytime soon. “Mount Washington Valley is fortunate to have skiing in its DNA,” Ray said. “Given its historical connection to skiing’s birthplace in the States, the rise of backcountry skiing has only improved the overall vibe of the area.”