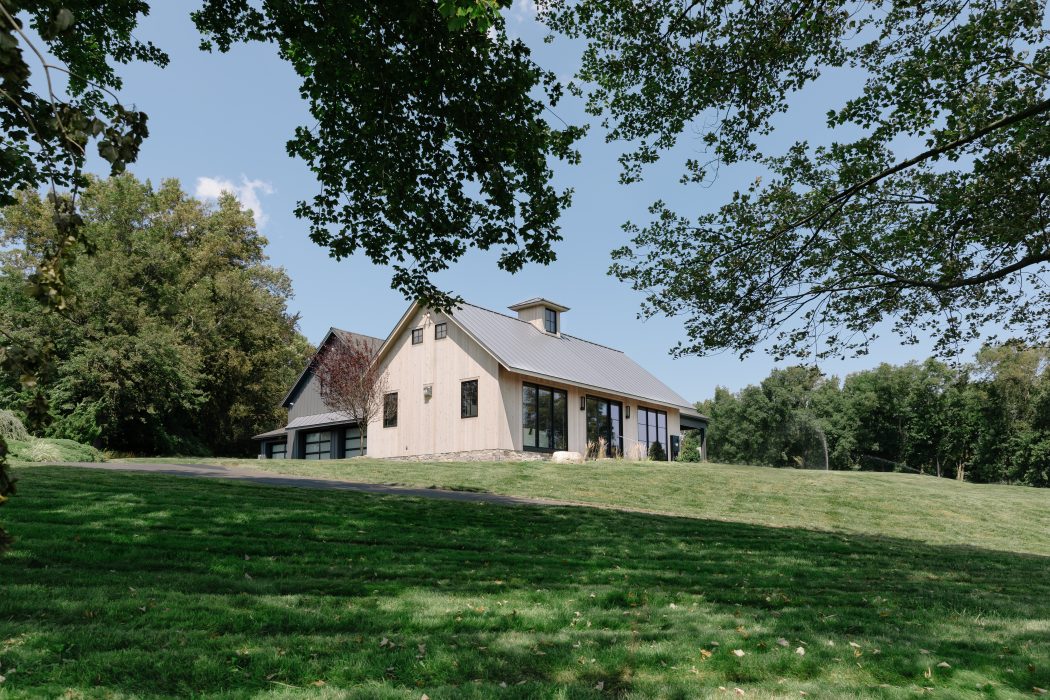 Builder Jerry Effren realizes his vision for a modernized farmhouse.

Jerry Effren always dreamt of building a farmhouse that fused contemporary design with a timeless aesthetic. He wanted the inside to be fresh and clean and the outside to look like it could have been there forever. As the principal with Greyrock Homes, Effren finally brought his vision into reality with his own home—a farmhouse perched on a hillside overlooking Norwalk, Connecticut’s Shorehaven Golf Club.

Working with Jim Jamieson of Jamieson Architects and Len Volpe III of Ring’s End Sales, Effren built a stylish 3,700-square-foot farmhouse that boasts dazzling views of Long Island Sound from virtually every room. Set more than twenty feet above the road, the farmhouse has thirty Marvin windows and doors that allows natural light to fill the interior.

“Natural light is extremely important, so we situated some awning windows up high in baths and closets so you have privacy but still get light,” Effren said. “Having an authorized Marvin dealer put it all together was important, because it’s quite a process. There are so many options with Marvin in terms of lining up transoms, the grids with the windows and doors, getting the screens and the hardware. It would have been really hard to put it together myself.”

The farmhouse has three bedrooms, three baths and a bunkroom, with the master suite located on the ground floor. The south-facing master also includes custom Marvin window and door integrated panels that illuminate the stunning design inside. “I really wanted the wall in the master to stand out while remaining subtle, soft and true to our aesthetic of bold neutrals layered with texture,” explained Leia T. Ward, the founder and principal staging designer of LTW Staging | Design whom Effren enlisted. “So we used one of our favorite new products, this faux suede wallpaper to add just the right amount of texture and dimension to the room.” Ward carried this approach throughout the rest of the home.

“The bones of this house are right in line with our brand where less is more and the use of bold pieces with clean lines everywhere,” she explained. “We stuck with black and white, then layered in tons and tons of texture such as leather woven chairs, linen sofas, hide chairs (by Stowed) and the finishing touch was the incredible black-and-white artwork throughout the house by Anouk Krantz.”

With the goal of capitalizing on the views, Effren faced challenges working with a property that slopes up from the road, which created grading issues. “We had to cut into the hill, build a retaining wall out back and situate the house so we had the views and the grading right,” he explained. “Therefore, we decided to turn the entry to the west side so we could install the largest windows and doors. It was a bit of a design challenge to position the house so that you got a sense of entry while maximizing the views from the main living areas.” Effren added that the versatility of Marvin windows and doors allowed him to design multiple components that worked together in an energy-efficient, integrated design: “Having the flexibility of using awnings and casement windows with any type of opening was a great feature.” 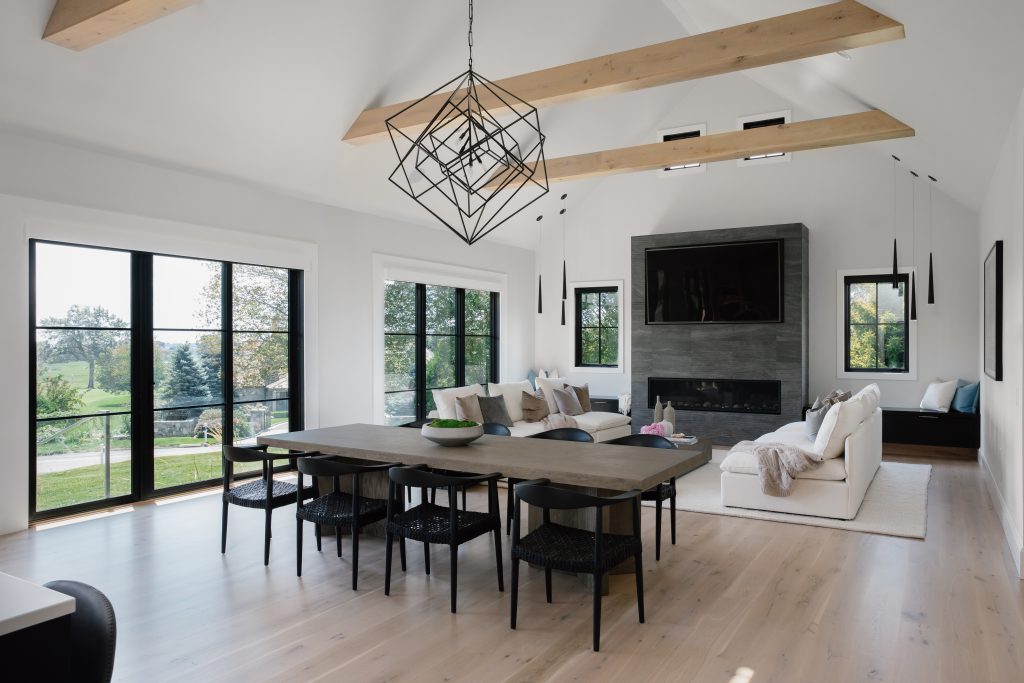 The centerpiece of the home is the forty-four-foot long barn, which serves as the main living area. A chef’s kitchen and a butler’s pantry open to a vaulted space Effren dubbed the “Great Room,” which has three patio doors that measure nine feet wide and eight feet tall. Primed with paint imported from Ireland, the Great Room evokes memories of a whitewashed country barn. The black frames of the Marvin casement windows and door unit complement this agricultural aesthetic. “This is really the heart of the house,” Effren described. “You can see the eighty-inch TV at one end of the room, as well as from the kitchen at the other end. This is where we cook, eat and relax.” From the barn, one can gaze toward Long Island Sound across a terrace that includes a built-in spa, outdoor kitchen, fireplace and personal putting green. 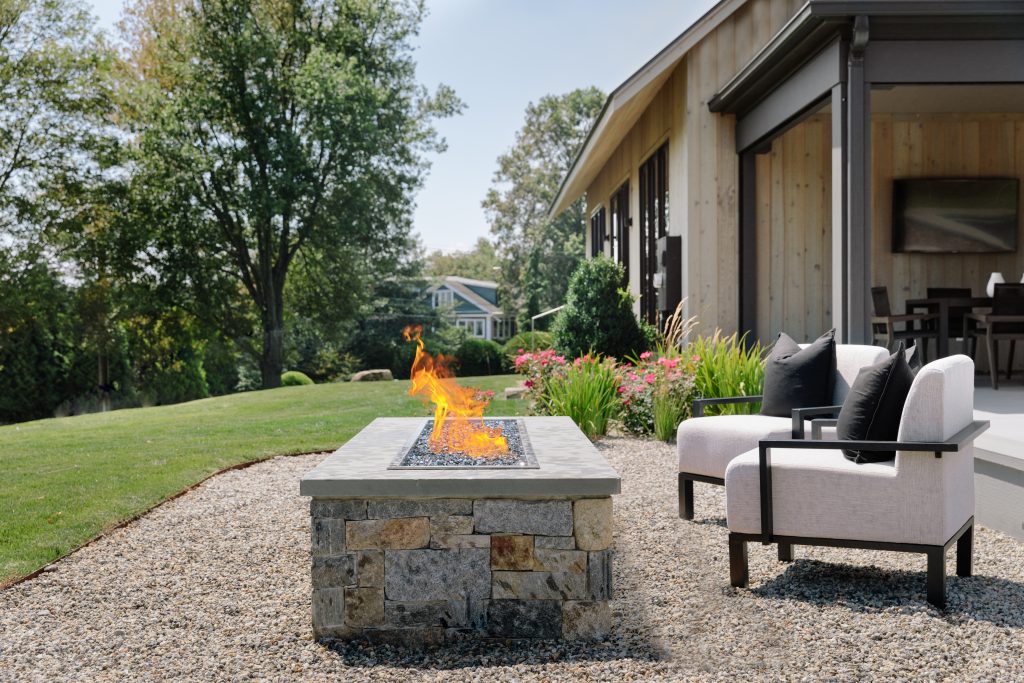 The goal of creating a home with the look of a vintage agricultural building was achieved with the use of western red cedar siding on the barn, while the use of thick stone veneer over the concrete foundation produced a crisp, clean line where it meets the barn’s cedar siding. A seam metal roof and board-and-batten siding on the bedroom wing continues the rustic character theme. Even the outdoor shower reflects the natural feel, with a stone veneer mounted on masonry board, and planks of the same engineered wood siding used on the house to create the enclosure.

One of Effren’s favorite features is the porch, which can be opened to the elements with electronically controlled screens that roll up onto the ceiling. The porch has a large television, a stereo, a forty-eight-inch Wolf grill and a small refrigerator and sink. Alongside the porch is a plunge pool with a hot tub that is around five feet deep and sits about eighteen inches above the ground. Effren loves the organic feel of the pool, which was built with the same stone that was used on the house, so that it seamlessly blends into the surroundings. A saltwater sanitation system reduces maintenance and requires fewer chemicals, and an automatic lockable safety cover eliminates the need for a fence. Sun tunnels provide plenty of light along a hallway that runs from the entry foyer to a door leading to the pool.

As a fitting tribute to Effren’s efforts, This Old House featured his project as one of its “Idea Houses.” Beginning in May, Effren guided host Chris Ermides through the many steps of his modern-meets-traditional vision. Watching the project take shape over the course of two episodes, This Old House’s millions of viewers could appreciate that the foundation of this innovative farmhouse was built on a bold idea that Jerry Effren wasn’t afraid to raise.