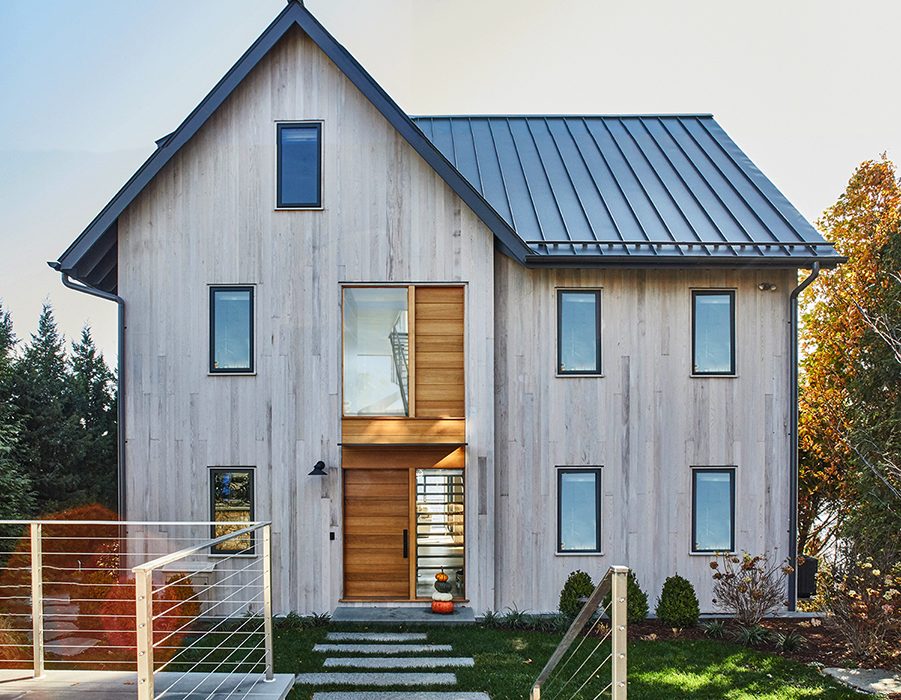 A minimalist-inspired home with an edgy material palette is all about the astounding ocean views.

The site of Kerry and Jed Stevens’ current home, they say, picked them.  Once they realized it was available, they had to have it. Indeed, waterfront parcels in New England are tough to come by and few are as idyllic as this one in Norwalk, Connecticut. Located on Long Island Sound, the property juts out over the ocean. “In the house, you really feel like you’re on a boat, as if you’re on top of the water,” says Kerry Stevens. “We feel very fortunate to live here.”

While the Stevens’ were smitten with the setting from the start, it took a while to create the home they envisioned. They contracted Beinfield Architecture’s Mark Goodwin, whom they had worked with previously, to design their new residence. While the team had initially considered razing the house to begin anew, Goodwin says that because code dictated the footprint of the original home be used and it was in the highly regulated flood zone, it was easier to transform the existing structure. 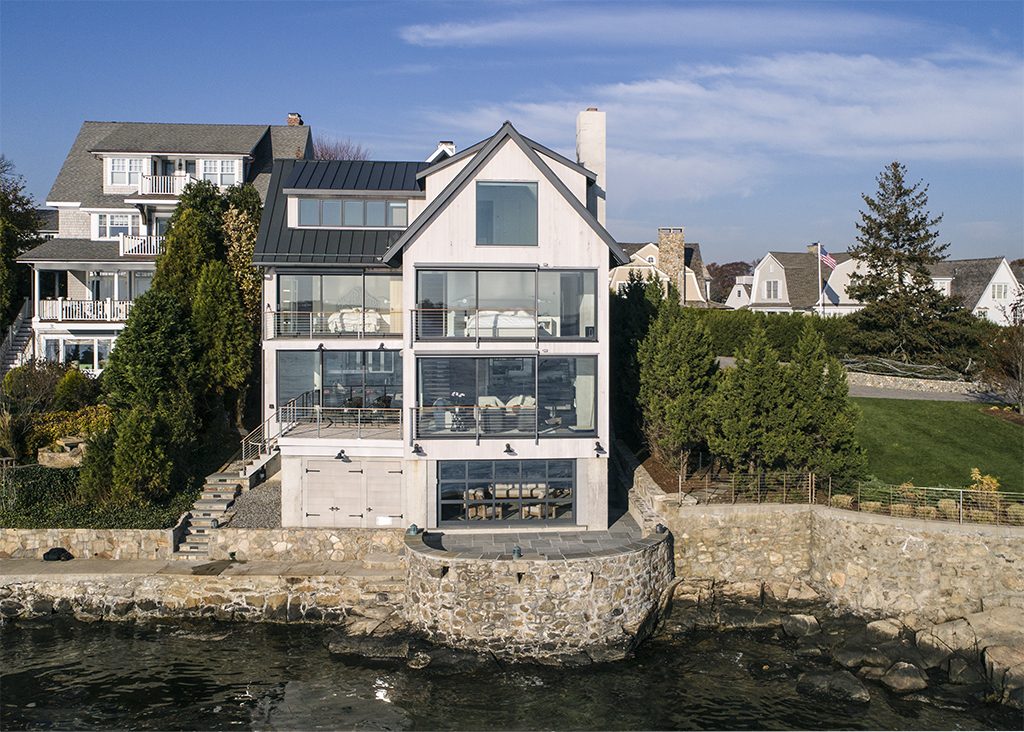 “The Stevens didn’t want a typical sort of beach house, they wanted something a little edgier,” says Goodwin, whose firm is known for designing homes that utilize a mix of materials and styles. “There’s a little barn aesthetic to it, with the coziness of a costal home, combined with urban sophistication that is achieved with concrete, streel, and raw wood.” The home is capped with a steel roof and bleached cedar siding used vertically evokes a contemporary feel. “We like to take New England structures and distill them down,” says Goodwin, of the slightly unconventional exterior vibe of the home. Yet the pitched roof and simplicity of the window style and arrangement nods to more traditional structures in the neighborhood.

The Stevens’ wanted the house to have a modern, minimalist feel so nothing would compete with the main directive: capturing the sublime ocean views in as many vantage points as possible. “As soon as you walk through the front door of the house, you see the water,” says Goodwin, who called for the design of the stairway to the second floor to be spare; one can see right through the steel rails through to the expansive view. 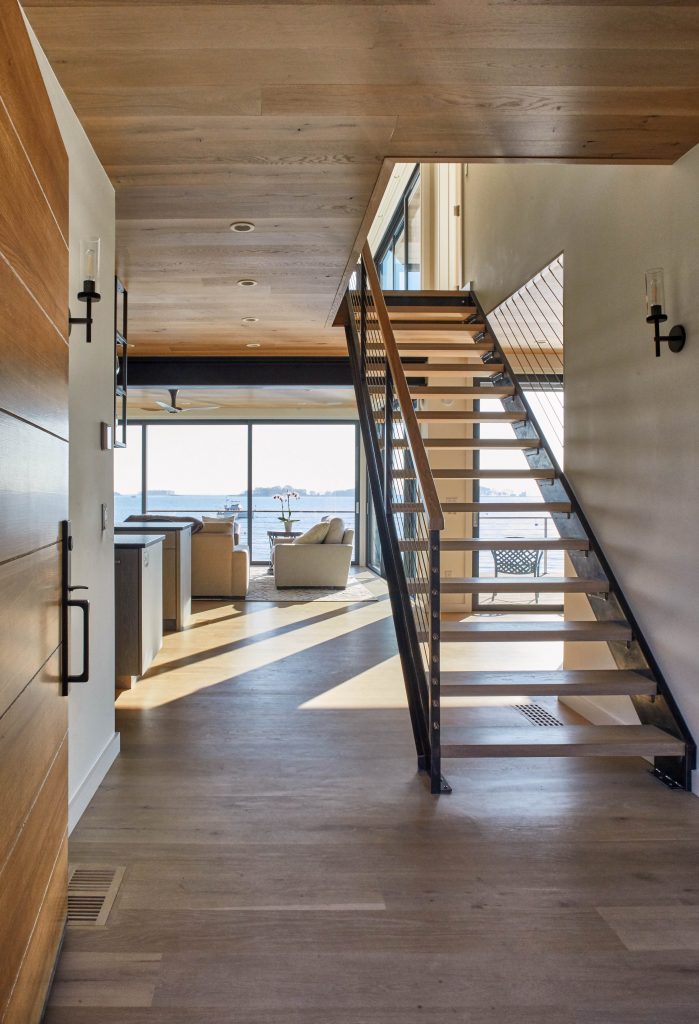 “The goal was to create synergy between the water and interiors,” says Ashley Schapiro, CEO of Milton Homes, the firm that built the house. The main level encompasses an open floor plan and features glass walls. The large expanses are from Marvin’s Modern Line windows, which are designed with clean lines and simplicity in mind to provide maximum light and views. The line is made out of high-performance HD Fiberglass, a revolutionary material that echoes the look of its modern counterparts with thermal efficiency.

“The Marvin windows and multi-slide doors have the modern feel the homeowners were looking for,” says Ben Kahan, marketing manager for Interstate Lumber, the product supplier. “Not only are they the right choice for functionality, they complement the style of the gorgeous waterfront home.”

The interior color palette is understated and neutral.  “We don’t have much hanging on the walls because most of them are glass. Art comes from outside,” says Kerry Stevens. “As soon as you walk in you see water on all sides and that’s where we wanted the eye to go.”

Since the home’s footprint couldn’t be expanded, it was a challenge to accommodate the number of rooms the Stevens’ required, says Schapiro. “We were able to avoid compromising on room size by creating an open space plan design.” With smart configuring and the addition on a third level of living space, the house encompasses roughly 3,000 square feet with four bedrooms that ensure all three of the Stevens’ grown children have a spot of their own. There are also multiple hang-out spaces, including a top-floor family room. 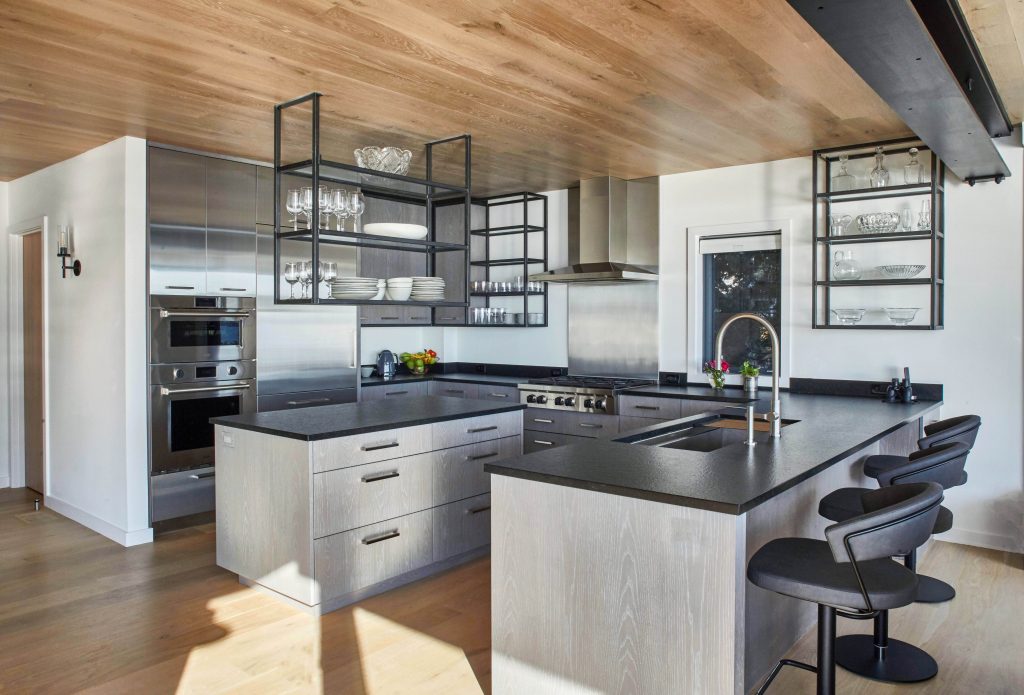 The kitchen features cerused oak cabinetry and open steel shelving systems that tie into the home’s exposed steel beams and stairway.  “With all steel and glass, it’s a pretty raw space,” says Goodwin, who called for wood-clad ceilings in the living areas and master bedroom to soften the spaces. “The ceilings and stained hardwood floors create a sense of warmth throughout the home,” adds Schapiro.

Two of the three paneled glass enclosures on the three walls of the main living space and master bedroom open, so fresh air filters constantly through the house in the warmer months. “When everything is open, you really feel like you’re outside,” says Kerry Stevens. In the winter the windows provide ample solar gain that heats the house. 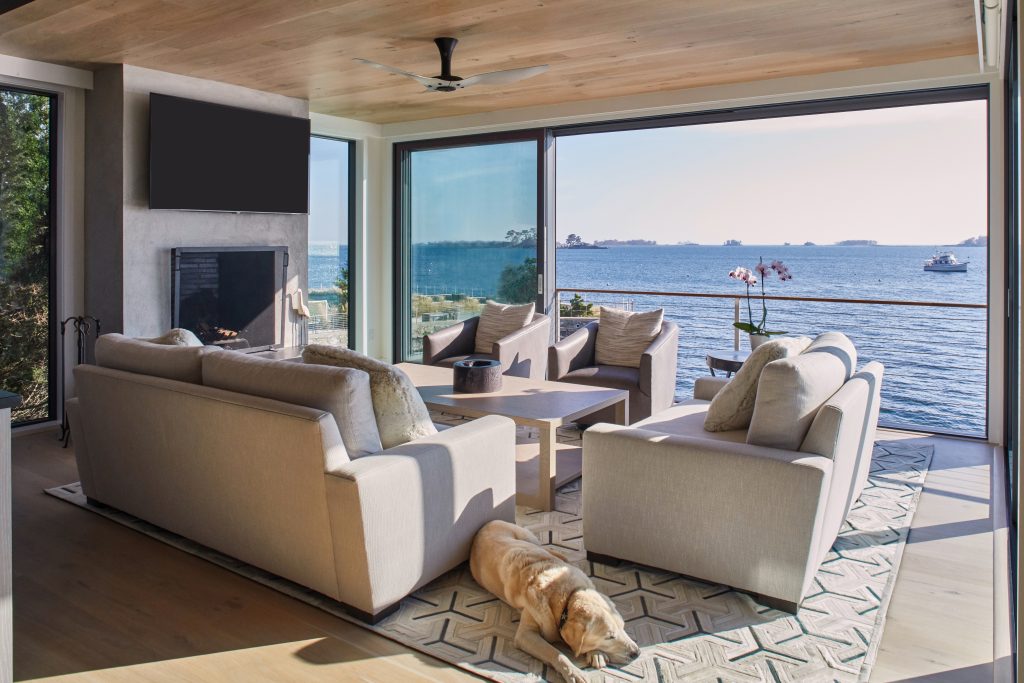 The view of the ocean changes with every season. “There are a lot of boats and activity in the mooring field during the summer and early fall. As you head into the colder months, there are oyster boats. In February, the sunsets are amazing,” says Jed Stevens. “Depending on the tides and how the sun and clouds are moving, the view is always slightly different. But there is always something special to see.”