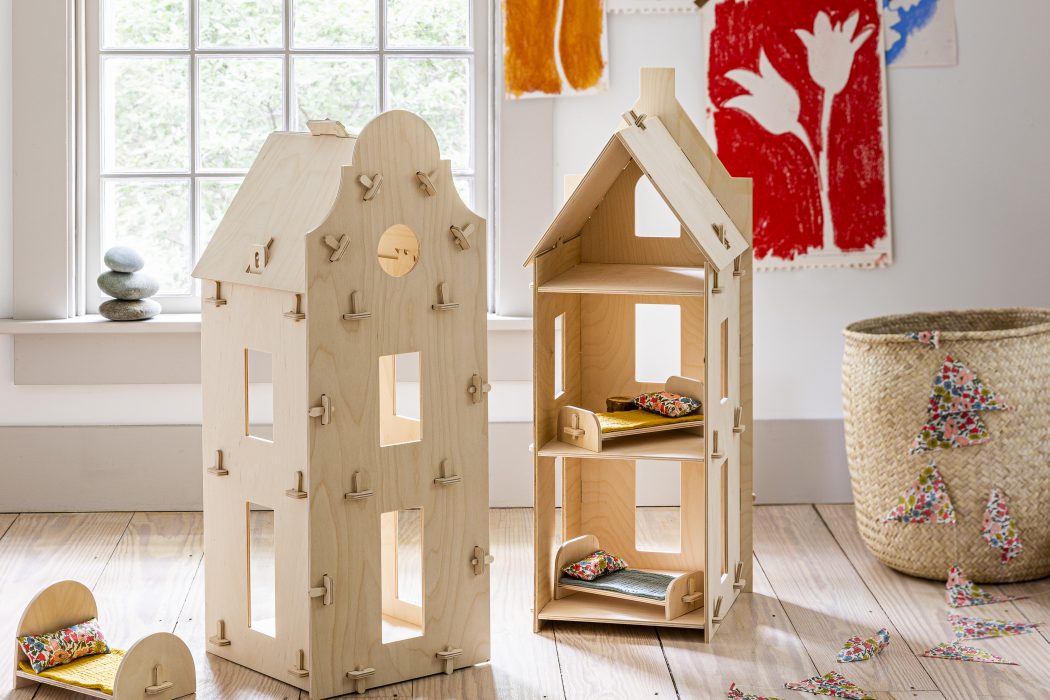 Maquette Kids gives children the chance to be the architects of their dream dollhouses.

A longtime furniture and product designer, Sarah Unruh had worked top brands, including Martha Stewart and The Food Network. But she’d never considered designing toys until she had children.

“As my daughters began creating their own worlds with fabric scraps and found objects in our living room, I started thinking about making dollhouses,” says Unruh, who has lived in Northhampton, Massachusetts with her family since 2020. When she began pondering the concept of dollhouse design, they lived in Brooklyn. “Our apartment was small with high ceilings and I wanted a dollhouse that was tall and narrow that could utilize the footprint of our home,” she recalls.

While many dollhouses in the market evoke a Victorian vibe, Unruh’s vision stemmed from their former Park Slope neighborhood of brownstones. “The idea was that you could have a bunch of the dollhouses grouped together to create the feeling of rowhouses or you could play with them individually,” she says.

In early 2020, Unruh’s line of modular dollhouses, coined Maquette Kids (derived from French, maquette is defined as “a small preliminary model”) went into production at a small factory in New Bedford. Each house comes flat-packed and is easy assembled by small hands in about four steps. While Maquette also has doll beds and adorably patterned accompanying linens in its line, houses are minimally adorned. The idea is that children will tap into their creativity to decorate their houses.

“I wanted kids to have a blank slate, a dollhouse with spaces where they could incorporate their own imagination,” says Unruh. Her own daughters have sheathed the walls of their dollhouses with wallpaper scraps, made hammocks for their Calico Critters, and furnished rooms with Origami chairs.

Unruh’s flexible model has caught on quickly: several small boutiques in New England carry Maquette Kids—including Boston’s Kodomo and Boutique Little in Maine—and beyond. And there are plans to expand the line, too. “We’re working on adding a carriage house and firehouse,” says Unruh. “And we’re always looking to collaborate with other designers in the world of miniatures.”