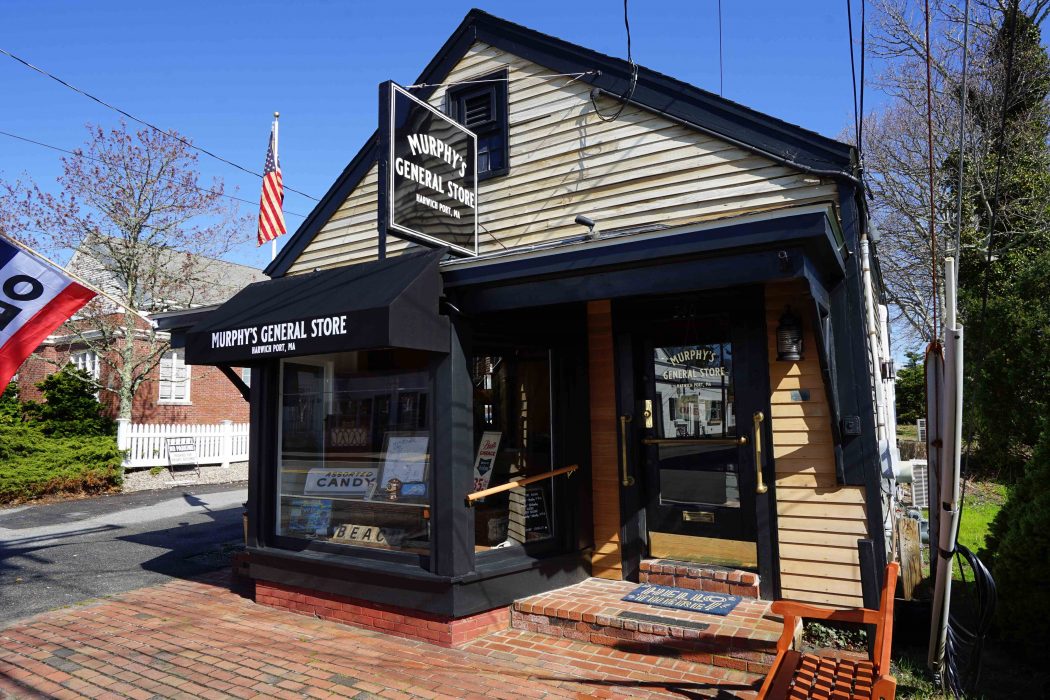 Jay Skowronek was just finishing getting his Harwich house ready for the upcoming summer rental season when his wife Heather texted him from their home in Los Angeles. “She told me to go check out an available commercial space on Route 28 in Harwich Port, so I swung by on my way to the airport. That building wasn’t right for us, but I noticed a charming old jewelry store across the street had a Going Out of Business sign in the window, so I went to take a look.”

Less than a year later the Skowroneks had left L.A. for good, moved to the Cape full-time and launched a new business, Murphy’s General Store, which opened in May 2019.  Heather, whose maiden name is Murphy, grew up in Harwich, so it was a good fit to come back home. She and Jay, a Connecticut native, had both been working for years in the television industry in California but had grown weary of that lifestyle. “We were just working for our paychecks. There was no real happiness,” says Jay. “We both loved the idea of opening a general store, so we made the leap and leased this place.”

In addition to housing a jewelry store for many decades, the circa 1848 building had previously been a hardware store as well as the office for a nearby lumber yard. The couple saw that it had great bones, but needed a lot of work. They spent six months painting, scraping, replacing rotted wood, and making the old structure shine, while also sourcing interesting items to sell.

“We went to a lot of different types of stores to get a sense of what we wanted to offer,” says Heather. “Originally we had hoped to sell apple cider donuts and fresh coffee, but we couldn’t get the permit to prepare baked goods.” The couple shifted gears to offering shelf-stable food items in an eclectic kitchen section that is full of interesting housewares and unique supplies.

“We knew we also wanted a stationary section, intriguing books, lots of nostalgic candy, and tee shirts and sweatshirts, since we are on Cape Cod and those are always popular here, “ continues Heather. “Plus we had to include a music section for Jay. He loves records and knows so much about music, so we have a really great selection of vinyl.”

“You see every demographic going over to the records,” says Jay. “ Older people get nostalgic, then you see a bunch of teenagers going crazy over a Jim Croce album. It is so cool to see the love of music span generations.”

The vintage vinyl and accompanying 1916 Silvertone turntable are items of fascination for younger generations, as are other scattered historic novelties. “We had a father explain to his daughter what the antique telephone on the wall was” says Jay. “She was really confused and exclaimed “This isn’t a phone. It doesn’t have a screen!”

Engaging with customers has proven to be a favorite part of their new career. “We meet a lot of really nice people,” says Jay “This is a popular vacation town, so people are usually relaxed and super cool to talk to. You learn so much from everyone who comes by.

The couple was planning ahead for their second full summer season when the Covid-19 pandemic put a hold on everything. “We had been focused on our brick and mortar shop, so the time off allowed us to work on our online store,” says Heather. Through the closure they stayed busy shipping products, doing plenty of local deliveries and eventually offering curbside pick-up. “We happened to have a lot of jigsaw puzzles in our storage room, “says Jay. “ It was a classic ‘new store owner over-ordering mistake’, but it turned out everybody wanted to do jigsaw puzzles while they were stuck at home. We delivered a lot of puzzles this spring.”

That kind of local touch is what Murphy’s General Store hopes to provide. “We are so happy to sell locally made products like candles, honey, coffee and original artwork, because we realize what a difference that makes for the economy here,” says Heather.

“Hopefully people will always be surprised when they come here and find something fresh and new. We really want people to cherish whatever they buy in our store,” says Jay. “We’re open year-round, so customers can rely on us to find cool things whenever they stop by. We like selling stuff with a little more grit, a little more rock-n-roll. That is the fun part.”