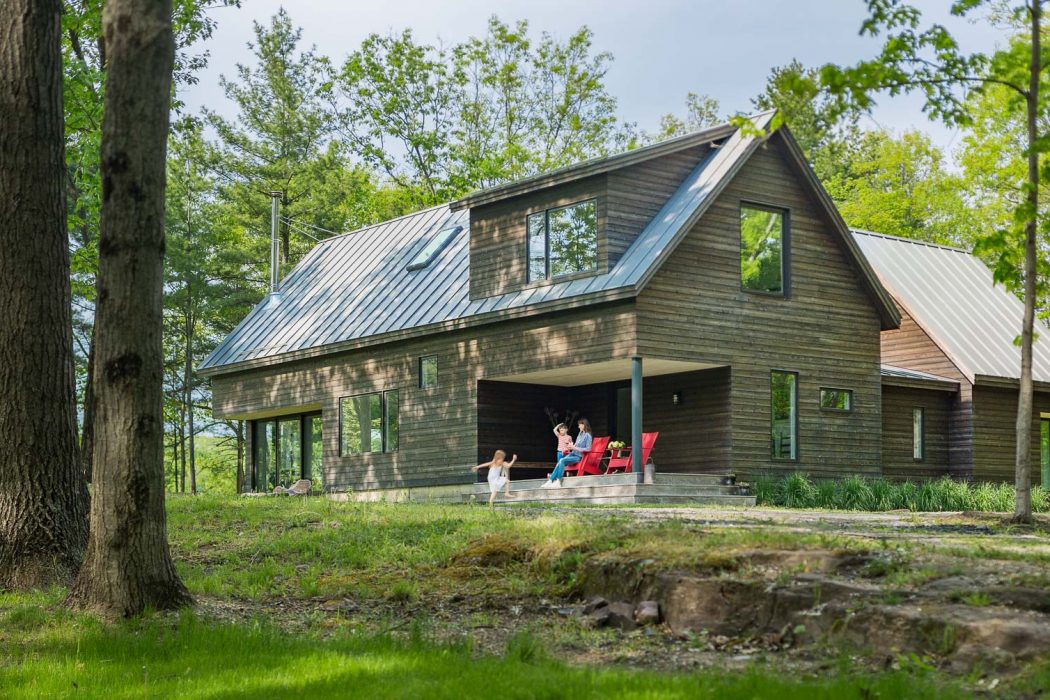 One family trades city life to build a simple and bright home in the Vermont woods.

Long before they built their house in the Vermont woods, Carolinne and Dylan Griffin had developed a deep connection with the idyllic knoll that was surrounded by trees and overlooked a meadow. It was where Dylan proposed to Carolinne shortly after they purchased the lot in 2008, and also where they were married. Through the years, they camped there with friends, and even built a 70-square-foot gardening shed with a deck and a pull-out bed.

“The first place we pitched a tent is where the living room is now,” Carolinne says. “We knew this land intimately and what it felt like in different places. We fell in love with how the light came through the trees, and we started envisioning what the house would look like.”

Although living in New York City for more than a decade, Carolinne had always dreamed of returning to the Burlington area, where she had attended college at the University of Vermont. In 2013, the couple decided to make the move with their two children, Roxanne, 7, and Alistair, 5. “Going from New York City to rural Vermont felt a little scary, but once we made the decision we dove in head-first and embraced it,” she says. “The lifestyle really suits us.”

Clearly, the homeowners had a deep understanding of the site, which guided the design process for Elizabeth Hermann of Elizabeth Hermann Architect + Design in Bristol, Vermont. “The homeowners wanted simple details and a clean interior,” Hermann says. “You could call it Scandinavia meets Vermont. They didn’t want a house that said look at me, but one that was part of the surroundings.”

Therefore, the siding is a bark color, while no corner boards were used on the exterior, which makes the house feel less bulky and allowed for the creation of indoor-outdoor transitions. “We wanted to experience the outdoors indoors by pulling that landscape into the house,” Carolinne says.

Every room in the house offers a view to the dazzling landscape, thanks to the extensive use of Marvin Windows that earned Hermann the “Best Transitional” award in the 2017 Marvin Architects’ Challenge. Judges selected the house for its “composition of two simple forms punctuated by large windows, allowing the residence to settle into the wooded site, while taking advantage of great views.”

Hermann used 21 Marvin units, including windows and exterior doors, which are all full glass. The largest is the 50-square-foot picture window in the living room, while one of the unique elements is a narrow, off-center window in the loft above the living room that perfectly frames a tree. “The windows are almost like paintings,” Hermann says. “We really pushed the boundaries of window sizes, using monolithic pieces of glass that allowed us to create these really big, uninterrupted views. At every vantage point, there is a window that shows something special about the site. It is really dramatic.”

Owing to Carolinne’s Swedish heritage, the open interior is awash in a white, uncluttered, sleek design. A polished gray concrete floor with radiant heat is one of the first floor’s unique features, while Vermont pickled ash was used for the second-floor master suite and loft.

Dramatic effect is also achieved through the ever-shifting roof lines that help shape the size and character of each room. The ceiling height is constantly evolving as one walks through the home, ranging from a height of only seven feet in the entryway to a 20-foot cathedral ceiling in the living room. “The more important the space, the higher the ceiling and more drama,” Hermann says.

In order to further create the illusion of space in the 2,100-square-foot, three-bedroom home, Hermann designed a walk-in pantry. “We didn’t want hanging cabinets,” Carolinne says. “Instead, we have this nook with a tucked-in refrigerator and open shelves for stuffing our plates, cups and all the kids’ artwork. Touches like that keep the house light and minimal.”

Today, Carolinne could not imagine living anywhere else. “I just love this house,” she says. “It’s bright, open and clean, but it also feels cozy because it’s in the woods. It’s an inspiring space.”