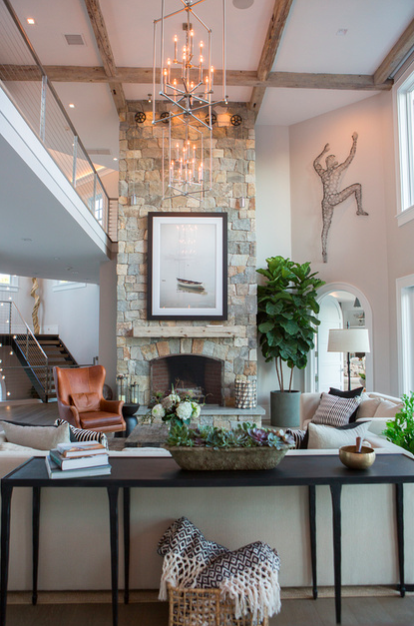 Right on the bay of Duxbury, Massachusetts, New England Living TV host Parker Kelley steps into the classic contemporary home of Jill and Paal in Episode 3 of Season 2. The Great Room, as the family calls it, is wide open to the second floor and beams of sunlight pour in through a wall of ocean-facing windows.

A fan of mixed media, Jill’s space is minimal but eclectic. The ceiling is lined with wooden beams from the 1700s. “They were originally red, but we wanted them to be inspired by California sun,” says Jill. Using acid wash and later stain, they transformed the beams to a more rustic light brown.

It’s hard to miss Rainer Lagemann’s Climber Sean, which was actually the couple’s jumping off point when they began designing their space. His figure, which is composed of tiny metal squares, looks as if it’s scaling the wall. “I love everything with a clean line, I love square, and I love the intensity of that figure,” says Jill.

There are so many fun surprises in this house, watch the full home tour to catch them all.