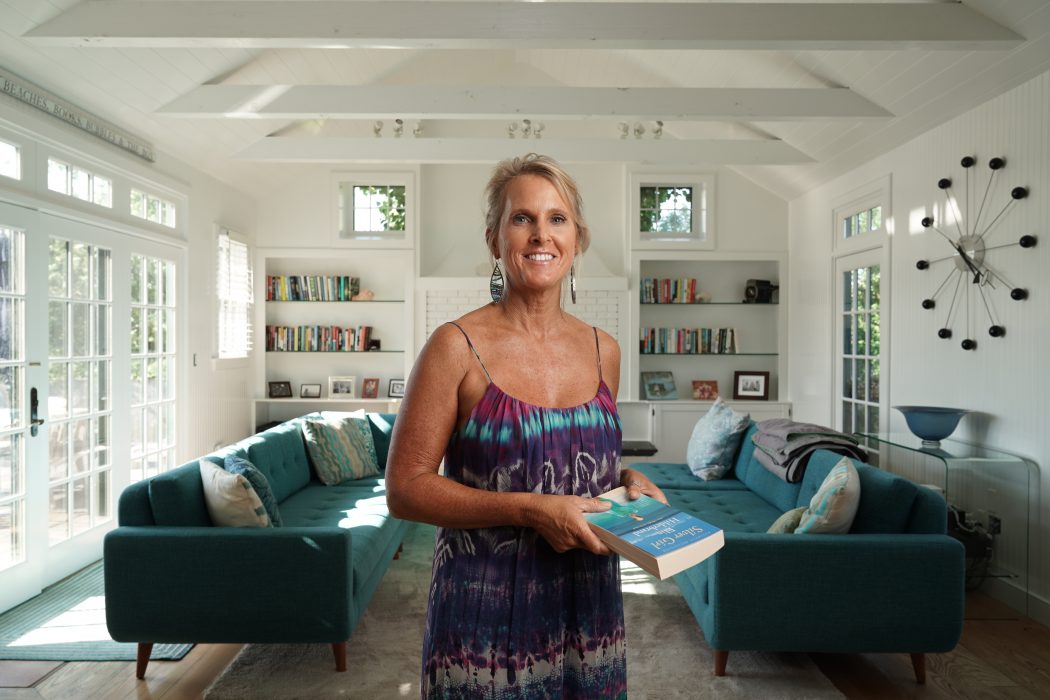 Buzzing around her spacious kitchen, Elin Hilderbrand is poetry (or would it be fiction?) in motion: washing and preparing corn on the cob, tomatoes, lettuce and other vegetables and fruits she had picked up at a local farmers market just an hour earlier. Before that, she had run six miles and taken a barre class. This, she explains, is a pretty typical start to her day.

It is late morning and the only indication that the fit, attractive blonde is a New York Times best-selling author is the MacBook Pro that sits open atop her brightly colored mosaic-tiled kitchen island countertop, flanked by a stack of writing pads and an assortment of books about the year 1969, which is research for her next novel, “Summer of ’69,” which will be released in June 2019.

“I’m sorry things are a bit hectic,” she says as she clears a few items from the counter and fields a series of phone calls; two of which are from her middle son, Dawson (she has three children—18, 16, and 12), ironing out details about what time he needs to be picked up from his summer job at the Nantucket Boat Basin. Finally settling in on the comfy sofa strategically placed near the pool in her oasis-like backyard that abuts a vast expanse of conservation land, Hilderbrand, 49, takes off her University of South Carolina visor—a nod to her oldest child, Maxwell, who was to begin his freshman year there in less than a week (“I don’t think he’s even started packing,” she shares with a laugh)—and runs her fingers through her shoulder-length hair before pulling it back in a low ponytail and putting her visor back on.

The prolific author, often referred to as the “queen of beach reads,” since her novels (21 and counting) are always set during the summer and almost exclusively on Nantucket—the island she has called home for 25 years—leans back on the couch and explains why the warmest season figures so prominently in her books and her life. Hilderbrand grew up in Collegeville, Pennsylvania, one of five children in a blended family. Her parents divorced when she was five, and she lived with her mother and two brothers during the week, and her father, his second wife, and their two children on the weekends and for one month each summer. Every July, they would rent a home in Brewster on Cape Cod. “They were very interested in us doing everything as a family, so we had all of these rituals that went with summer and that made it very special,” she recalls. “Then we either went out for dinner or stayed home for dinner, and if we stayed home for dinner, we would walk down to the beach to watch the sunset like it was a Broadway show.”

But those summertime rituals came to a sudden end when, in the fall of 1985, Hilderbrand’s father, a 41-year-old tax attorney, died in a small plane crash in inclement weather. “Everything changed,” she says matter of factly of the year she turned 16. “My brother and I went to work in a Halloween costume factory that next summer and it was, as you can imagine, really bad because I was used to being on the Cape and having these idyllic summers.” It was while working in the factory, with plenty of time to think, that she made a decision: “I was bemoaning my reversal of fortune and thinking that I could not believe this had happened to me when I decided that if I do nothing else with my life, I am going to find a way to spend every summer at the beach. That was my goal.”

After excelling academically in high school, Hilderbrand went to Johns Hopkins University, where she majored in creative writing. From there she took a job as an editorial assistant at a publishing company in New York City, hated it, and decided she should teach, since she knew she would enjoy reading and writing with kids, and it would allow her to have summers off. She liked teaching, but after spending a summer on Nantucket, where she met her now ex-husband, (and father of her children) Chip Cunningham, she taught for one more year then moved to the island permanently. She did some writing on Nantucket and in the off-season, she and Cunningham traveled the world.

Knowing that she wanted to write professionally, Hilderbrand applied to and was accepted into the prestigious Iowa Writers’ Workshop at the University of Iowa. She wasn’t happy there, didn’t like the area, found her classmates overly competitive and missed her husband and the island. During her second year in the program, she decided to write about Nantucket and began what would be her first book, “The Beach Club,” which was released in 2000. The book was chosen as the beach read of the week by “People” magazine, and so began what has become a prolific and successful writing career that has seen some of her books, which focus on topics, such as love, romance, friendship and forgiveness, reach as high as number two on the New York Times best-seller list (she’s determined to hit number one) and has gained her legions of faithful readers—hundreds of whom have, for the past four years, descended upon Nantucket in January for an Elin Hilderbrand fan weekend at the Nantucket Hotel and Resort. Hilderbrand can’t say enough about her fans. “I have many points of gratitude in my life, but when it comes to my fans … they are so amazing, devoted, vested and just full of love. My number-one mission is to honor that in both trying to write the best books possible and in my interactions with them, remembering that all of these people are just so lovely and so giving of themselves.”

One of her early fans, with whom she has become good friends, is Linda Holliday, who serves on the advisory board of the Boston-based Breast Cancer Research Foundation, an organization with which she encouraged Hilderbrand, a breast cancer survivor, to get involved. “I just love her inside and out. She’s one of those people who radiates beauty and is so genuine. There’s nothing fake about her,” says Holliday, who spends time on Nantucket and is the longtime girlfriend of New England Patriots head coach Bill Belichick. “And I am such a fan of hers. I enjoy the familiarity of Nantucket and you can just lose yourself in her writing.”

The author, who says she loves living on Nantucket with its traditional charm, sense of community, and exceptional nightlife, restaurants and shopping, enjoys meeting her fans and says talking with or hearing from those who are battling cancer bring her a great sense of satisfaction. “People will say they read my books in the chemo chair,” she begins, her eyes welling with tears. “And I think, OK, is there a greater honor? It’s your worst day, and you brought one of my books because you wanted to have something happy. Nothing anybody is going to tell me is more meaningful than that.” Through her website, Hilderbrand offers those fighting cancer an opportunity to receive a free bundle of her books at the cancer centers where they are being treated. “It is so meaningful to hear people’s stories and to know that in some way I was able to lessen their burden,” she says.

Hilderbrand’s writing technique is somewhat unconventional. She writes her stories out longhand on a legal-size notepad—either poolside or at the beach—then transcribes them onto her laptop. In the summer, she and Cunningham alternate weeks with their children, then she goes off island twice a year to write. In the spring, she spends five weeks in St. John. “It’s so much like Nantucket, but in a tropical sense,” she says. There, she gets a “running start” on her summer book with “no distractions.” Her boyfriend, Timothy Field, a contractor who lives in Pennsylvania and who she sees every couple of weeks, joins her in St. John and takes care of laundry and other household tasks so she can focus on writing. Then in the fall, Hilderbrand rents an apartment on Beacon Hill for about six weeks, during which time she hunkers down, often by candlelight, to revise her summer book (she usually has two releases a year—one in the summer and another in the winter). “Chip is great. The kids stay with him while I’m there, so he covers me,” she says. Her characters tend to resonate with readers, in large part because Hilderbrand “gives them humanity.”

“If there’s one theme, it’s that we all mess up. We need to pick ourselves up, dust ourselves off, say we’re sorry, ask for forgiveness, and move on,” she says. “I feel like people really connect with characters who are sympathetic, and you know you’re sympathetic when you’re real, and you’re real when you have flaws.”

As a working mother, Hilderbrand says she knows all too well the struggle to juggle the many facets of life. “People will sometimes say to me, `oh you have it all figured out … you do it all and have it all together.’ And I am like, no, no I don’t. Nobody has it all together. It’s a daily struggle and my motto is onward. Onward, onward, onward,” she says emphatically. “I can’t look back. I can’t fix it. I can’t change it. If it’s already happened, all I can do is move forward.”

With that, Hilderbrand delves back into the multi-tasking she manages with aplomb, answering the phone, scheduling afternoon and evening activities with her kids, and checking her email before jumping into her well-worn, 10-year-old Jeep Wrangler to head into town to bring a visitor to the ferry so she can do what she does best: get back to writing.