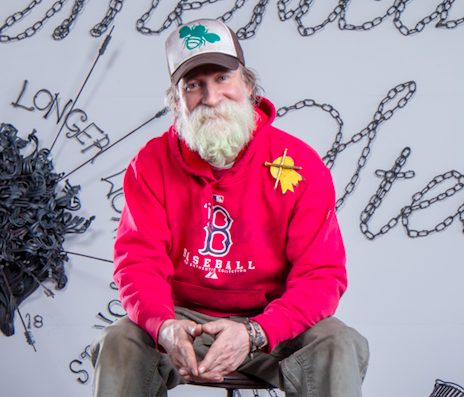 Maine artist John Bisbee is breaking his own rules. The iconoclastic sculptor has a new piece, “American Steel,” at the Center for Maine Contemporary Art in Rockland, Maine, which will be on exhibit beginning June 30 and he is looking forward to seeing how it all plays out.

“I’ve included four things I used to ridicule: politics, humor, text and realism. I can’t wait to see what happens,” he says. The artist has been creating intrigue with his work for over twenty years, in part because of his chosen medium. “My motto is Only Nails, Always Different,” says Bisbee.

While attending the school of art and design at Alfred University in Alfred, New York, a young Bisbee was searching for items for a found-object project when he came upon a bucket of nails that had merged together into an enticing lump. He began using them and the weld that fuses them as his sole materials. “Everyone has baseline relationship with nails—an elemental understanding of nails as something utilitarian,” he says.

Through captivating exhibitions at prestigious museums and galleries throughout the country, including the Portland Museum of Art, SAPAR Contemporary in New York and the Kemper Museum of Contemporary Art in Kansas City, Bisbee has allowed his intricate and exacting work to speak for itself. Rooms dwarfed by giant welded spike-serpents, walls covered by pinwheeled flowers of common nails, or a floor filled with an undulating ribbon of spikes tell their own story to the viewer.

This summer, “American Steel,” which includes nail-crafted oars, chains, and shellfish, will add another narrative in a Bisbee-created font. “I will be speaking in nails,” he says. “The current climate in the Unite States has been activating people wonderfully. The nail can stand in for the common man and woman. Nails can be comforting but also quarrelsome. They have their own idea of their utility.”