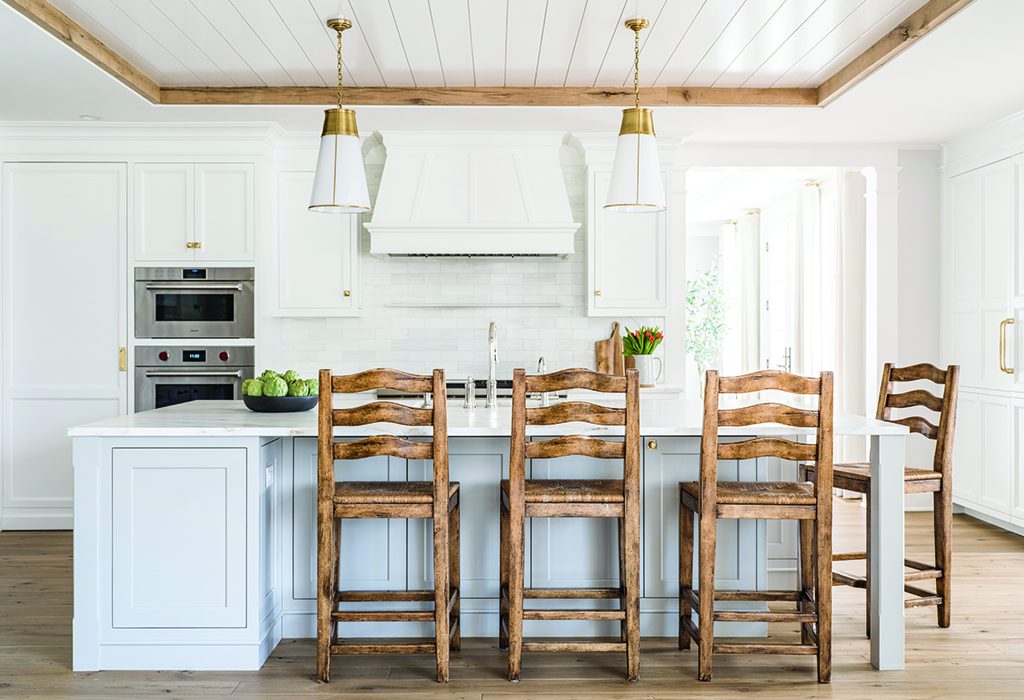 An ambitious project in Wayland fuses classic and contemporary style.

How do you tear down a historic Georgian brick estate and replace it with a nearly 9,000-square-foot property that combines the charm of the past with the contemporary touches of the present, has an intriguing layout, a definite cool factor and, oh yeah, looks like it’s been there for a century? That was Laura Schwendt’s task for a four-acre Wayland, Massachusetts, property that was home to the heir of the Gillette fortune for forty years. Schwendt, an interior designer who also holds degrees in architecture and civil engineering, knew that executing this vision would require reimagining how we bring the best of the past to the present.

The homeowners initially debated renovating the house, but that was quickly deemed financially impractical due to the disrepair of the brick, the lack of proper insulation and the absence of any true updates over four decades. Instead, the house was leveled and the original foundation was pulled out, with only the carriage house and barn left intact. The decision was made to start anew, but always with an eye to making it all look old. “Here we were almost ninety years later asking ourselves how we can pay homage to the property and the landscape, and not make it look like this
massive home on top of a hill,” Schwendt says.

One way was to utilize reclaimed materials, from the wood flooring to the hand-forged nails, as well as old iron memorabilia and even an antique badminton racket that were discovered in the barn and later displayed on bookshelves and tables. “There were amazing relics that we preserved,” Schwendt says. “We even dug up old bluestone that had been covered over around these English gardens and used it for the patios and walkways all around the house. I loved finding products and interesting materials to incorporate into it.”

This exquisite attention to detail extended to the plumbing fixtures. “I was specifically looking for fixtures that gave a nod to early twentieth-century design, since the home was built in the early 1930s,” Schwendt says. “Belle Époque–inspired style with state-of-the-art functionality, if you will.” (Belle Époque is the term often given to a period of French history between 1880 and the outbreak of World War I.) To achieve this historic aesthetic, Schwendt turned to the Kohler Signature Store and Supply New England for the fixtures throughout the house, including in the kitchen where the Kallista Quincy Collection faucets exemplified the home’s overall design goals. 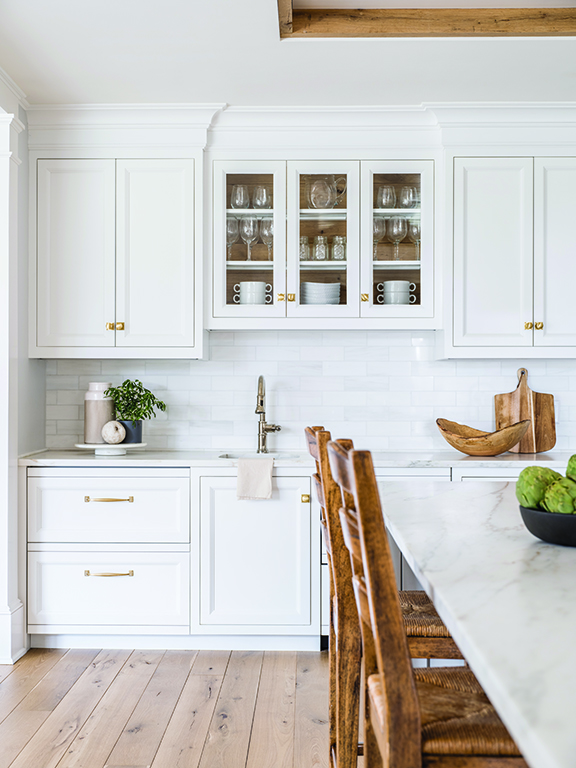 “The kitchen faucets needed to stand confidently in the interior without standing out in the wrong way,” Schwendt says. “The lines of this faucet gave a sense of the Belle Époque style, but simplified the details for today’s contemporary sensibility.” In designing a modern kitchen that is awash in white walls and cabinets, Schwendt also employed a unique process to bring an old world quality to the floor. Called “fuming,” this process dates back to the 1800s in England and involves exposing the wood to ammonia hydroxide, which darkens the wood and brings out the grain pattern. The kitchen island also has a white marble countertop that came from Vermont that looks like it could have once been in a Newport mansion at the turn of the century. 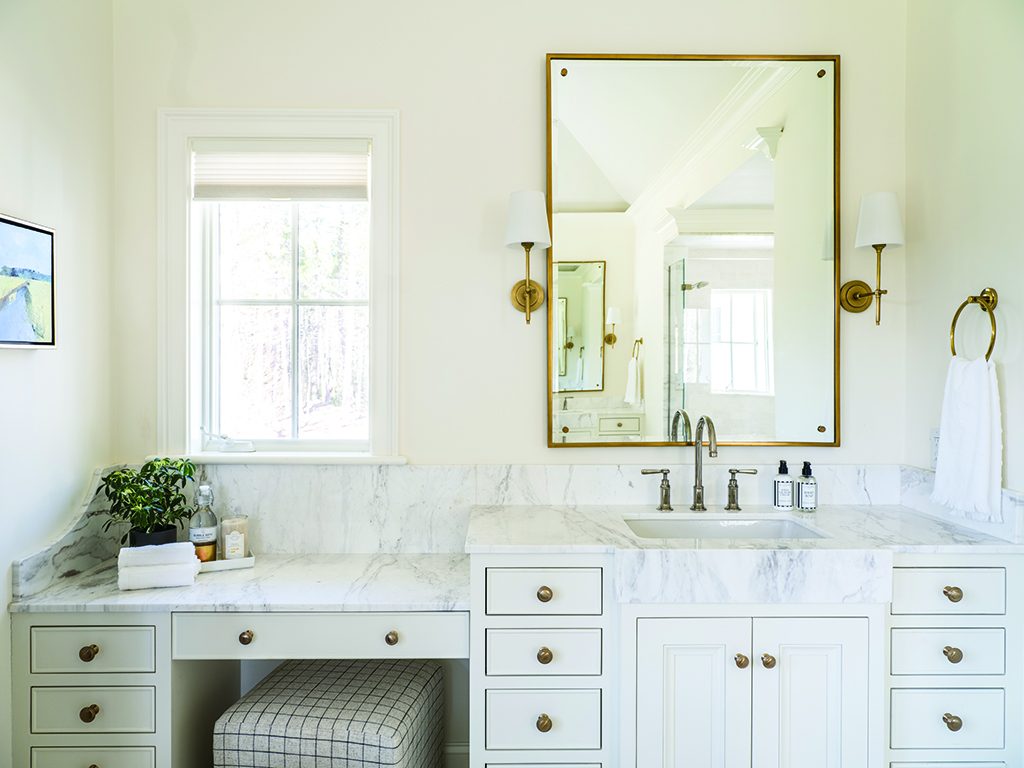 This theme continues in the basement kitchenette, which features a Litze bridge faucet from Brizo with an arc spout and an East Linear cold-water dispenser from Newport Brass. Both epitomize the project’s aesthetic with sleek designs that still look and feel timeless. So too can be said of the laundry room where the Kohler Whitehaven farmhouse kitchen sink and Brizo Artesso pull-down kitchen faucet match modern utility with touches of yesteryear. The bathrooms throughout the house are also well-appointed with selections from Supply New England. The Brizo Artesso collection and the Brizo Litze collection with industrial handle are featured in the first- and second-floor bathrooms, while the basement bath includes a Kohler Brockway sink with Cannock faucets. In the master bath, a Victoria & Albert Toulouse tub catches the eye.

The grand staircase leading to the second floor offers another glimpse into how intrigue was created throughout the home. The defining feature of the ceiling at the top of the staircase is what appears to be two solid beams, but they actually are three separate pieces adroitly locked together in what is called a “beam wrap.” “It was quite complex, but when it’s done well, it looks simple,” Schwendt says. 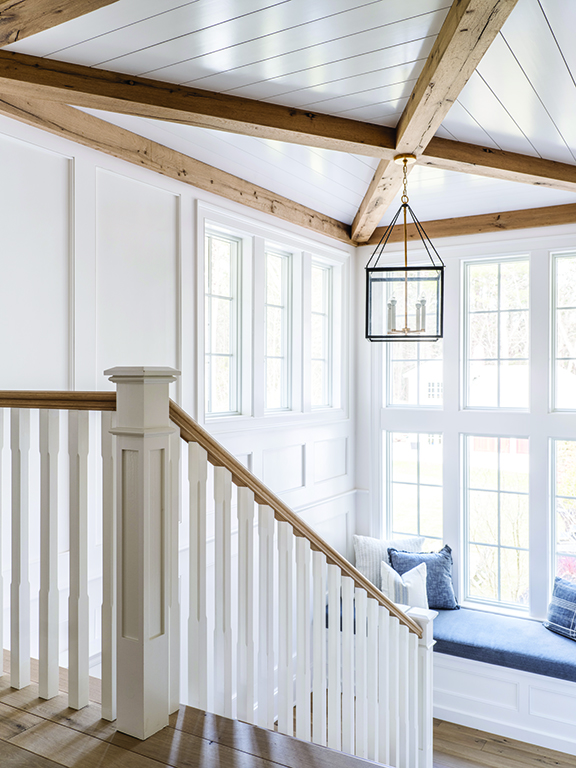 The floor patterns were yet another way to create interest. Floorboards were turned, with concentric squares helping to delineate one room from another. “Every room flows into the next, so we used different floor patterns to create definition,” Schwendt says. “By changing how the flooring runs and altering the openings, we were able to establish each room as its own.” Although the floor plan is dramatically different from the original property, the living and dining rooms, as well as the master bedroom, are all located in nearly the exact footprint as before.

Reflecting on the finished project, Schwendt believes that a feeling of “instant antiquity” was achieved but with dashes of modern-day flair. “There is an estate charm to the home, but not in such a way as you wouldn’t feel comfortable putting your feet up,” she says. “We wanted that delicate balance of a slightly formal appeal, but informal enough to be comfortable and warm.” Indeed, from the reclaimed timbers down to its modern faucets, the estate’s charming character successfully pays homage to its past while welcoming a bright, new future.