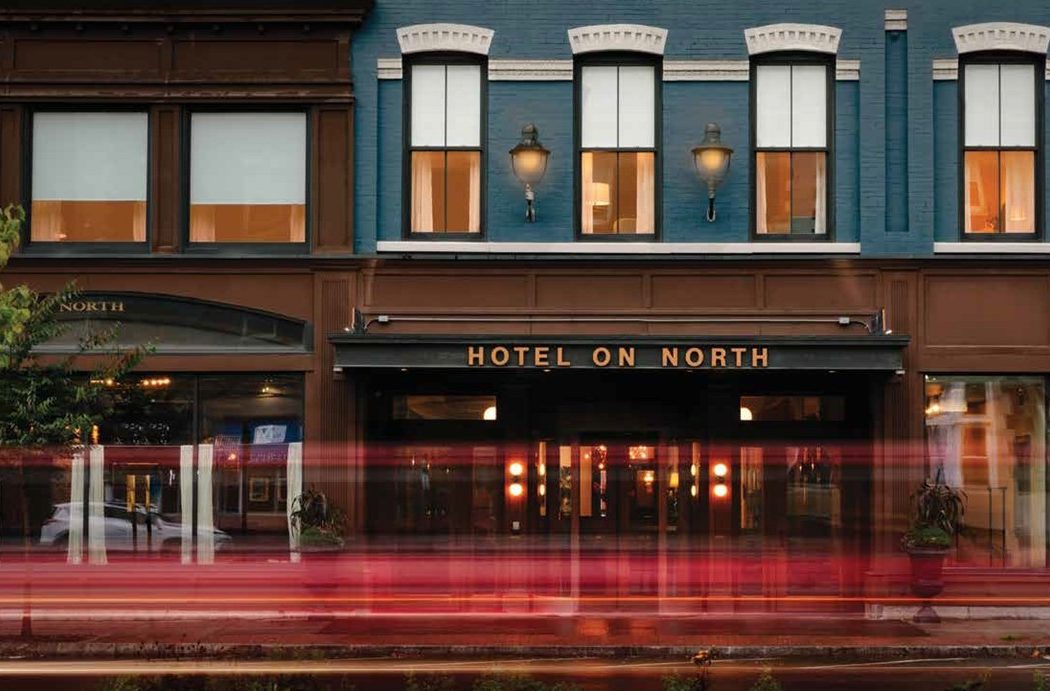 How a hotel breathed new life into Pittsfield, Massachusetts.

For David and Laurie Tierney, opening a hotel in Pittsfield, Massachusetts was not so much a business decision as a means of giving back to a community that had given them so much. Apart from the four years he went off to college, fifty-seven-year-old David has spent his entire life in Pittsfield where today he runs a local construction company founded by his father. With a deep passion for their hometown, he and Laurie set out to bring to Pittsfield the first non-chain hotel to be opened in nearly fifty years.

For too long, the couple thought that travelers perceived Pittsfield as a worn-down town to simply drive through on their way to the more swanky and stylish destinations of the Berkshires, like Lenox, Stockbridge and Great Barrington. Just as Oakland has long taken a backseat to San Francisco, Pittsfield has been overshadowed by its closest neighbors. One way to begin changing that dynamic, the Tierneys thought  was to give visitors a unique lodging experience that would define the city as more glamorous than gritty.

“Pittsfield did not have a nice [place to stay],” Laurie says. “David and I do a lot of traveling; we like to stay in really cool, funky hotels. We thought, why can’t we have that right in downtown Pittsfield? It’s a great little city; I call it the Brooklyn of the Berkshires, because it’s edgy and cool. So, we both knew what we wanted. We had our vision.”

When the couple purchased the historic three- and four-story buildings that were once home to a haberdashery and announced plans to transform it into what is now Hotel on North, the reaction was less than enthusiastic. “People told us we were crazy,” Laurie says. Still they remained undeterred.

Converted from what was Besse-Clark, an iconic menswear and sporting goods store, the hotel’s two buildings date back to 1874 and 1879, respectively. With a close eye on the past, many of the buildings’ original elements were repurposed. When that wasn’t possible, they were replicated. The wood floors, exposed brick walls, tin ceilings and wood beams were all incorporated into the design, a project taken on by architect Karen Hunt, who also happens to be David’s sister. “Karen did a great job designing the rooms around how the building was,” Laurie says. “She retained as much of the character of the building as she could.”

One of the most critical aspects of the building renovation involved the windows. A portion of the financing for the renovation was based on historic tax credits, and the National Park Service has rigorous specifications for windows. In order to earn the tax credits, the Tierneys hired Marvin to replicate all the original windows. The hotel now has 140 double-hung Marvin windows, along with ground floor storefront windows, that fall within the park service’s historic parameters.

“Marvin is so superior to other manufacturers that there was no question we would use them,” David says. “We wanted to put the best into this building.” The windows match what was originally in place, but are updated to meet all energy standards. “The rooms are nice and warm, and the windows inside and out look like they did in the 1800s.”

The hotel’s forty-five rooms and common areas were renovated with the 19th century in mind, with light fixtures, bathroom tiles, paint colors, walls and floors remaining faithful to the time period. Each room has a different footprint and is uniquely furnished and designed. The most distinctive is the Library Suite, a 644-square-foot corner suite featuring 125 bookshelves stacked with curated books, crafts and memorabilia. There’s even a rolling library ladder from which the views of downtown Pittsfield and the Berkshires are stunning.

Guests will also find a rotating exhibition of art, sculpture, photography and other curated pieces that highlight the region’s history. Opened in 2015, the hotel includes a restaurant and bar, which were closed during the pandemic. “We went back to the time when the buildings were built and brought together the type of materials they were using then … and then sprinkled in some modern touches to make it more up to date,” Laurie says. “It’s a nice blend of the old with the new. There’s a vintage industrial vibe to it.”

From the outset, the resolve to go local never wavered. Furniture, woodwork, lighting, windows, curtains and art work were all created by artisans and craftsmen in the area. In addition, all the carpenters hired were local. “We wanted to make sure this was a community-based project,” Laurie says. “The community is everything. It’s not good to open a business if you’re only helping yourself.”

With that in mind, the hotel connects with the community through a multitude of imaginative ways. One program called “Dogs on North” allows guests to walk dogs from a nearby shelter. Another, “Kittens and Cocktails,” invites the community to enjoy a beverage while being introduced to kittens who are hoping to be adopted. (Perhaps it’s needless to say that the hotel is pet friendly). A third program, “Library and Libation,” is a book club where members of the community gather at the hotel to share drinks and their thoughts on their latest read.

Of course, the pandemic temporarily shut down these programs, but in the meantime the owners have found other ways to bond with the community. One way has been to offer discounted rooms to visiting healthcare workers. “We have a dozen or so extended-stay rooms, with kitchens and washers and dryers, so it has worked out very well with doctors and nurses,” David says.

As for the goal of helping to revitalize the downtown area, it appears to be working. “I can name five businesses that either opened or expanded because of the hotel’s presence,” Laurie says. “Before, people wouldn’t take a chance on the city. Now, we have a great partnership with a lot of local businesses.”

Like many in the hospitality industry, Hotel on North has been hit hard by the pandemic. But when life returns to normal and people begin traveling again, the Tierneys are confident that the centrally located Hotel on North will become a desired destination for those looking to head south to the theaters, museums and dining scene of Lenox, Stockbridge and Great Barrington, or north to hike Mt. Greylock. “We are a unique experience in the heart of the Berkshires,” David says. “Pittsfield is a great jumping-off point.”