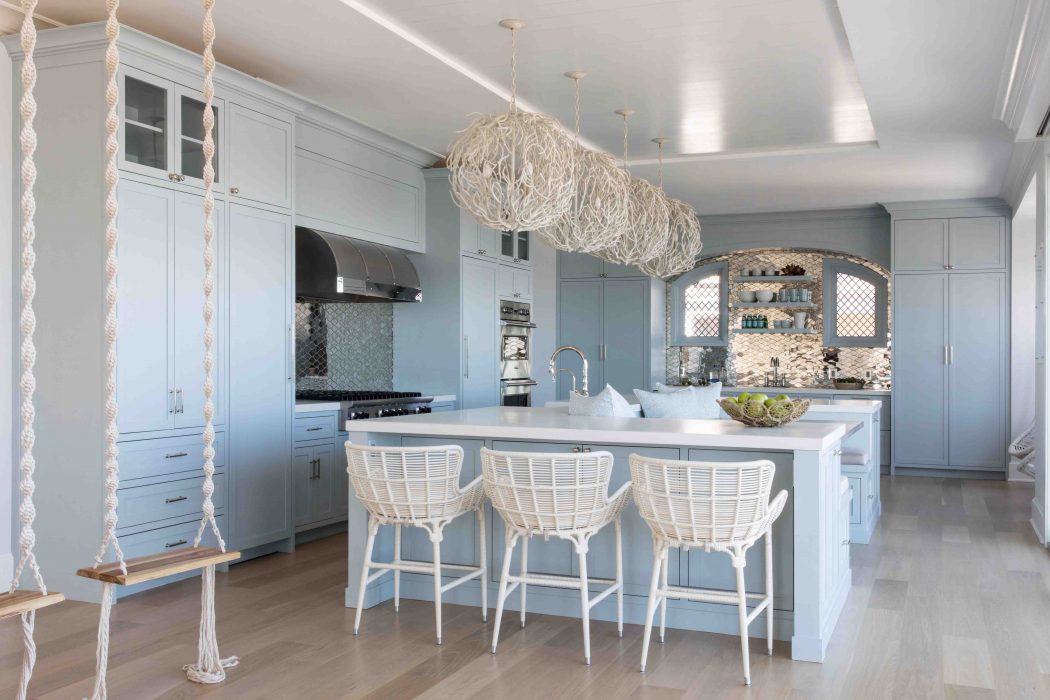 When a mother of two was diagnosed with cancer, building a seaside home became a love letter to her family.

Rebecca Timlin-Scalera had always loved the water. She loved the sights, the sounds and the smells of the beach in her town of Fairfield, Connecticut, a place where she found peace and happiness. A few years ago, after she was diagnosed with stage 4 metastatic breast cancer, Rebecca set out to build a home for her family that would celebrate every aspect of living on Long Island Sound. “The house became a love letter to her family,” says Sarah Weiland, who, as owner and principal interior designer of Tusk Home + Design, helped Rebecca realize her vision for the home, which was christened the Sound House. “She really wanted for her and her husband and two kids to wake up to the sea, so everything about this home was designed to incorporate the sea and sand.”

Rebecca and her husband were living less than a half-mile away when they discovered the shorefront property, which already had an older home on it. They hired Gina Schapiro and Grace Design Build in nearby Greenwich, who then brought architect Don Fairbanks on to realize the couple’s vision. “It was always Rebecca’s dream to have a beach house,” Fairbanks says. “She really fell in love with the Ocean House in Newport, Rhode Island, and told me that she wanted her house to be her own version of that historic property.”

After demolishing the existing 1980s structure, Fairbanks and his build team solved the puzzle of adhering to coastal zoning regulations. “We had to elevate the home above the velocity zone of wave and flood danger, so the first floor ended up nine or ten feet off the ground,” Fairbanks says. He came up with a dramatic front staircase that leads up to a Second Empire-style structure. “The mansard roof helps you get more space, because you can bury some square footage within the slopes.”

Once inside, the three-story foyer is a strikingly open space, highlighted by a spectacular staircase. “Rebecca wanted to be able to see through the house as soon as you enter, and she originally hoped for a round staircase,” Fairbanks says. “That really would take up too much space, so we came up with an elliptical design, which works really beautifully.” The circular feel of the entry was intentional, explains Weiland, “because Rebecca wanted the home to feel like it was embracing everyone who entered.”

Rebecca also wanted as many views of the water throughout the house as possible. “She wanted to allow the smell of the sea, the fresh air and the warm sun to flood into the space,” Weiland says. To achieve this, the builders utilized Marvin Ultimate Clad windows throughout the home, including casements and picture windows, as well as the Marvin Ultimate Bi-Fold Doors and Ultimate French Doors. “The whole back of the house opens to the beach,” Fairbanks says, “with sliders, windows, decks and balconies.”

Even though the Sound House would be the family’s year-round home, it was designed with a distinctive beach house feel. There is plenty of space to relax, with playful swings and hanging basket chairs, which entice anyone to tuck in with a book or skim through the air in the tranquil living room. The house is designed to be lived in, says Weiland, who introduced materials and finishes that would stand up to the sun and sand. She also helped to redesign the kitchen to feature a sixteen-foot island with a built-in banquet with plenty of seating. “We wanted to create a focal point for entertainment and family dinners, and to ensure that everyone would have views of the water,” Weiland says.

Throughout the home, the colors and design details pay homage to Rebecca’s love of the seashore. Both soft and jeweled tones of blue mingle with ecru, sand and off-white, while maritime map wallpaper livens the home office and silver seagulls adorn the dining room walls. Weiland chose whimsical yet striking lighting fixtures representing jellyfish, nautical rope and shells for each room of the house. Four pendant lamps, reminiscent of coral, hang over the kitchen island and can be seen shining dramatically through the windows at night. “I wanted those to have a major impact,” Weiland says. “If you walk up from the beach in the evening, you can see them all lit up. It is incredible.”

The home has four bedrooms and five and a half baths, as well as a mudroom and two laundry areas on separate levels. There is also a large media/play room directly off the kitchen, which Rebecca specifically intended as a fun spot for her two children and their cousins and friends to enjoy. “Rebecca was always thinking of others,” Weiland says. “That is why, even as she was battling cancer herself, she created a charity to support others.”

In 2016, she founded the Cancer Couch Foundation, a nonprofit organization that exclusively funds metastatic breast cancer. Up to the very end, she remained committed to working as hard as she could to fund metastatic breast cancer research. In December 2019, Rebecca Timlin-Scalera succumbed to her long-fought battle with cancer.“

Her legacy is to never leave behind others still living with this disease,” Weiland says. Rebecca’s other enduring legacy is, of course, this warm home where her family can still feel her presence in the sights, sounds and smells of the sea that she so loved.