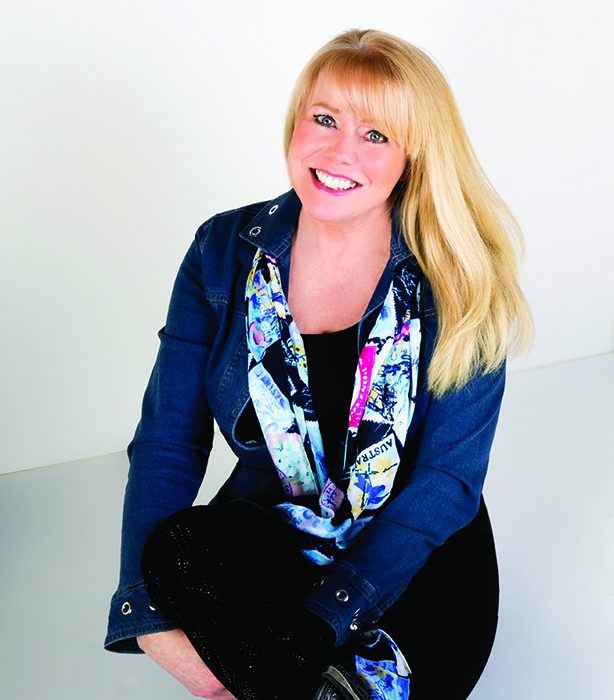 By leading with her heart and infusing a little laughter, spirit medium Maureen Hancock provides hope and healing to those looking to connect with their deceased loved ones.

A sense of anticipation pervaded The Zen Loft yoga studio in West Bridgewater, Mass., on a recent Tuesday evening in February as a group of 26 people sat in folding chairs in clusters from two to 10. Most conversations were light. Some produced tears.

A few minutes after 6:30, the room went silent and everyone’s attention went to the entryway, as a middle-aged blonde barreled through the door, dropped her bag on the ground and hurried to the front of the room to pour herself a drink. “I’ve got to get my vodka,” she said, eliciting a round of laughter, and then apologized for being a few minutes late. “Traffic was brutal. And this is water, by the way.”

That is how those in attendance met Maureen Hancock, an internationally renowned spirit medium and author of The Medium Next Door: Adventures of a Real-Life Ghost Whisperer. The vivacious 54-year-old helps connect people with their deceased loved ones through abilities that, interestingly enough, she believes most people possess. They just haven’t been provided with the necessary tools to tap into them, she maintains.

After exchanging pleasantries, mixed with doses of humor—“are you a spirit virgin?” she asked a young man before turning her attention to an older woman who said she had been to several of Hancock’s readings. “So, you’re a spirit ho?” she deadpanned—the former stand-up comic got down to business.

Hancock began by standing in front of a family of four and telling them that she was “feeling” a man. “A husband, a father … he died from COVID,” said Hancock, her eyes going from briefly closed to wide open as two family members started crying while saying it was the older woman’s husband and her children’s dad. “Oh, he’s a hot ticket,” Hancock said with a chuckle. “He’s right here and just said, ‘How much did this get you for?’” referring to the cost of the reading. “He said to tell you he loves you and ‘I’m not dead, just different,’” she added—evoking more tears.

After several more readings it appeared, based on audience members’ feedback, that most of the messages that had come to Hancock—including names, occupations, causes of death—were on target, or nearly so. Some were misses, but that goes with the territory, she says.  “Sometimes things come across crystal clear, and other times they don’t,” Hancock says. “I’d say about 90% of what I get is correct and oftentimes it’s very specific information like names, dates, when they passed, things about their family, their life, what they did for work … it’s pretty mind-blowing.”

When asked about skeptics, she says that she was once among them. There are fly-by-night mediums who give legitimate practitioners a bad name, she says, adding that her readings have made some skeptics do 180s, but when someone’s a cynic, “they’re just completely closed off” and not ready to receive the messages that she can give them or that they can receive on their own. “I firmly believe that we are all mediums to varying degrees. We have intuition, but life and stress get in the way; we question everything … but when you stop questioning, you can really tap into your ability to see, feel, hear and sense your intuition and tap into the other side,” Hancock says confidently. “I just think when people lead with their hearts and not with their minds, that they open up to a higher consciousness.”

Hancock says she comes from a long line of Irish mystics and discovered her ability to communicate with the dead when she was five-years-old, after a severe case of lead poisoning had her in and out of treatment at Boston’s Children’s Hospital for three years. She tried to ignore the otherworldly messages and have a “normal” childhood, but says they came back full force when she was in a near-fatal car accident at age 25, and again on Sept. 11, 2001, when she was “inundated” with messages from the spirit world. It was then that she knew she had to pursue her calling and use it to help others.

Suzie Falco, a 59-year-old mother of six and grandmother of five, says that when her son, Bo, died in 2008 at the age of 19, she was inconsolable. Soon after, a friend recommended she talk with Hancock, and the encounter, she says, “changed my life.”

“There are things she would have never known. She knew things about him and about how and where he died by suicide that nobody knew,” the Quincy-based holistic nutrition counselor says. “Then she started flicking my hair, which Bo used to do to me all the time. There is no other explanation other than he communicated with her.”

Falco says she gets “signs” from her son all the time. “I don’t know what I would have done without her,” she says of Hancock. “She gave me so much hope and even though I can’t see him, I can feel him.”

Hancock, who lives on the South Shore with her husband, John Hatfield, a martial arts studio owner to whom she has been married for five years, has two sons, ages 22 and 20, and three dogs.  In addition to doing group gatherings, called “Postcards from Heaven” and “The Medium Next Door Live,” and private readings, Hancock, who has a background in holistic studies, volunteers at hospitals and in hospice centers, where she works with terminally ill patients and their families as well as with bereaved parents who, like Falco, have lost children.

She also offers workshops and holds grief retreats around the world, from the Berkshires to Costa Rica, and is debuting a new medium-inspired talk show (distributed by Gaia, a Colorado-based production company) later this year. No stranger to being center stage, Hancock has made guest appearances on local, regional, and national TV programs.

“I’m fortunate in that I absolutely love what I do,” she says. “I am a former comedian, so my events are actually fun for me. I make people laugh and cry and I feel like I bring them hope, comfort, some healing and connection, and validation.”