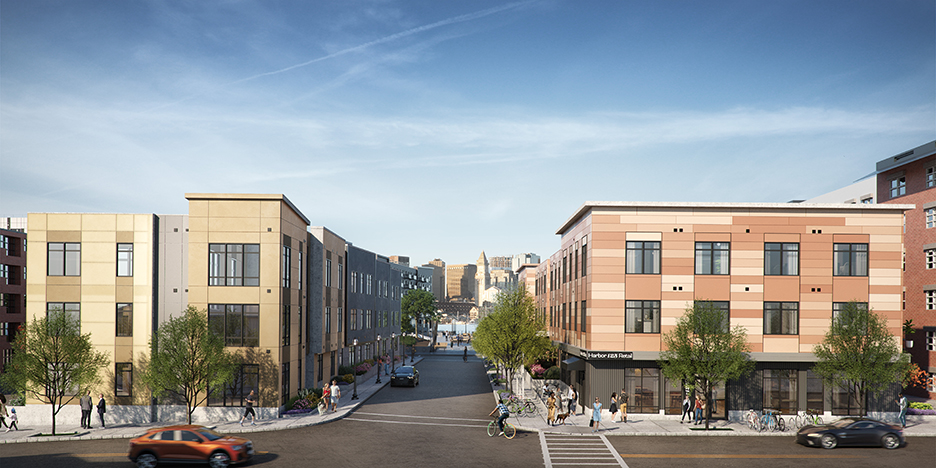 From its first major land development project in 1833, when General William Sumner and his newly formed East Boston Trade Company began connecting via landfill five harbor islands and then constructing wharves and a railroad terminal, the area known as East Boston (or “Eastie” to the locals) has been a hub of advancement and progress.

Over the decades, sugar refining, iron forging, timber processing, clothing manufacturing and especially shipbuilding—including the site where the world-famous McKay clipper ships were built—kept the streets of East Boston busy and productive. This industrious atmosphere attracted generations of immigrants as well as business visionaries and has defined the area as enduringly forward-thinking and energetic.

This vibrancy is now being realized in a number of impressive residential real estate developments that are transforming East Boston into the city’s newest “hot” neighborhood. “East Boston has truly come alive in terms of accessible prime real estate,” says Chantelle Persac of Coldwell Banker’s Persac Group. “It has become the premier place overlooking Boston Harbor to live.”

Persac and her husband Ryan, who first moved to the Jeffries Point area of East Boston fifteen years ago, specialize in sales within their home turf. “Ryan was looking for an affordable place to live as a first-time home buyer and he stumbled upon Jeffries Point,” Persac says. “He could see the potential here, as the area became more gentrified.” Ryan Persac began to focus exclusively on East Boston properties, selling to colleagues who became friends, and friends who became like family. “Ryan is synonymous with East Boston,” says his wife. “He is one of the area’s very top agents.”

For the Persacs, it is easy to market their own neighborhood, since there is so much in it to appreciate. In addition to stellar waterfront access and views, East Boston is an easy commute to downtown, the financial district and the Seaport. “It is also a wonderful neighborhood where kids can ride their bikes. We have Piers Park, a beautifully landscaped park on the water with community sailing, and there are plenty of great restaurants and bars in walking distance,” Chantelle Persac says. “This whole area is a great melting pot, too. We have neighbors who are brand new to the area as well as those who have been here since the 1950s.”

Persac credits former Mayor Tom Menino with spearheading municipal investment in all of the waterfront areas in Boston. “East Boston really benefited from the injection of those funds,” she says, “and that is reflected in the residential real estate market.” Data from The Collaborative Companies indicates that East Boston was the city’s third-highest neighborhood in sales volume last year.

A new construction property from the Persac Group, the Harborwalk Residences, was 60 percent sold within the first six weeks, and the units are getting 99 percent of asking price. Persac notes that these condominiums are priced attractively, with one-bedroom units starting below $500,000. “The opportunities are here, especially for first-time buyers,” says Persac, who touts the thoughtfully designed one-, two- and three-bedroom layouts that range from 675 square feet to 1,100 square feet. The light-filled units all have keyless entry and Nest thermostat systems, Kember cobble oak flooring throughout, sleek modern kitchens with Silestone and Calacatta quartz countertops and bathrooms featuring porcelain floor tile and chrome Moen fixtures.

“The Harborwalk Residences really are waterfront living within reach,” Persac says. “We are adjacent to the Harborwalk, which is a beautiful pedestrian route that runs all the way into South Boston.” She reiterates how active the East Boston market has been. “People are really invested in owning homes here,” she says. “The entire corridor has lots of continued potential. We are doing great business and seeing lots of energy in this incredible location. It really is amazing!”