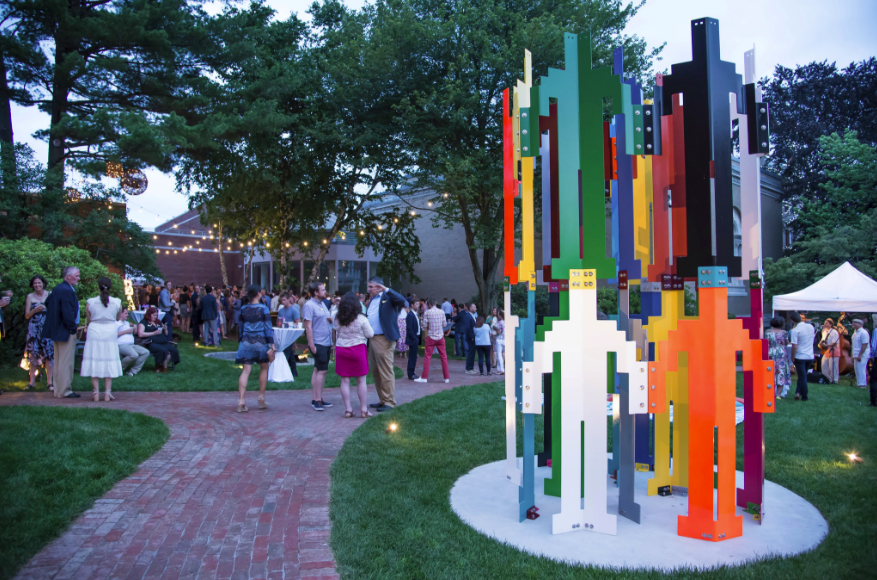 Nine works of art that curators recommend seeing this summer.

Art invites us as viewers to empathize and reflect on our society. New England is host to many prestigious museums with collections curated to mystify and move us, from Nari Ward’s contemporary sculptures that encourage us to slow down and look around to Sally Mann’s photography collection that causes us to think about youth, mortality and the legacies we leave behind. When asked for the most-prized pieces either on display or coming through in a visiting exhibition, here’s what nine New England curators had to say. 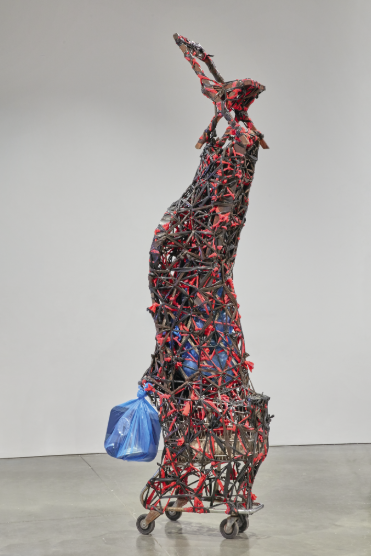 Nari Ward, a Jamaican-born artist who emigrated to the United States at the age of 12, uses found objects to create magnificent works of art that focus on themes of immigration, homelessness, Caribbean culture and the African American experience. “Savior” is a 10-foot tall, black and red web of plastic bags, stroller wheels, mirrors, plastic bottles and other discarded everyday objects that people who are homeless see true value in.

“With ‘Savior,’ Nari Ward has alchemically transformed found objects, including a shopping cart and refuse into a regal and commanding sculpture. The title points to something divine or otherworldly while the materials connote the hidden facets of daily life. Especially in urban environments, homeless people often use shopping carts to house their possessions, while the public both sees and overlooks these individuals. With this work, Ward provides new possibilities for these humble materials and speaks to the visibility as well as invisibility of the disenfranchised in the public sphere.” —Jessica Hong, Assistant Curator, ICA

“Dos Mujeres (Salvadora y Herminia)” by Frida Kahlo is currently part of the permanent collection in the Museum of Fine Arts’ Art of the Americas Wing. 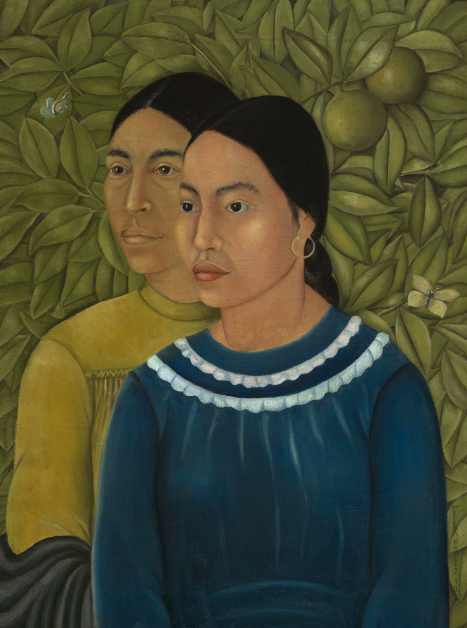 “Dos Mujeres (Salvadora y Herminia)” is the first painting by Frida Kahlo acquired by any New England museum. The painting is also the first piece of artwork sold by Kahlo in 1929. Salvadora and Herminia were two maids in the artist’s parents’ house, and the portrait celebrates the working class and also native Mexican heritage.

“The artist recalls Italian Renaissance portraits, especially those of Madonnas surrounded by foliage, reimagined with the flatness and brilliant primary colors of Mexican folk painting. Kahlo painstakingly highlights the women’s Mexican features, carefully distinguishing the shapes of their foreheads, high cheekbones, complexions and lips…Salvadora and Herminia push forward into our space against a lush screen of leaves, fruits and butterflies, likely inspired by the garden at Kahlo’s home, the Casa Azul (Blue House) located in Coyoacán, about seven miles from central Mexico City. Their overlapping pose speaks to their intimacy and invites us to consider how they are related, whether by blood, work or love.” —Elliot Bostwick Davis, John Moors Cabot Chair of the Art of the Americas Department and director of the Museum’s Art of the Americas Wing, Museum of Fine Arts

“The Teamster” by George Bellows is on permanent display at the Farnsworth Art Museum. 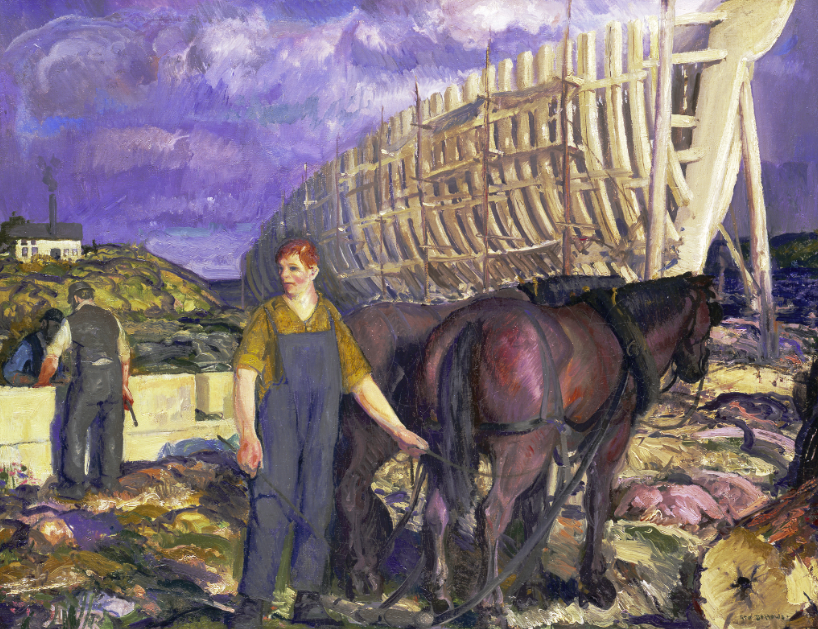 George Bellows, “The Teamster,” 1916, oil on canvas, Collection of the Farnsworth Art Museum, Bequest of Mrs. Elizabeth B. Noyce, 1997

George Bellows is an American realist painter whose well-known paintings depict the tenements of New York City and also the intensity of boxing matches. However, “The Teamster” at the Farnsworth demonstrates his early New England influence when he followed his teacher Robert Henri to the coast of Maine and captured nature’s northern landscape and the labor-intensive lifestyle.

“George Bellows’ 1916 painting “The Teamster” exemplifies so much of why Maine has played such an important role in the history of American art.  Bellows, who was born in Columbus, Ohio, found his way to New York where he took classes at the Arts Students League and met the renowned American painter and teacher Robert Henri. Henri persuaded Bellows and his fellow student Rockwell Kent to come to Monhegan to paint. Bellows made his first trip there in 1911, returning in 1913 and 1914 before coming to Camden in the summer and fall of 1916. It was there that he painted this scene of boat builders at work. With his colorful palette and free brushwork, Bellows captured both the beauty of the seaside site in summer and the character of one of Maine’s most important industries and the people who made it possible.” —Michael Komanecky, Chief Curator, Farnsworth Art Museum 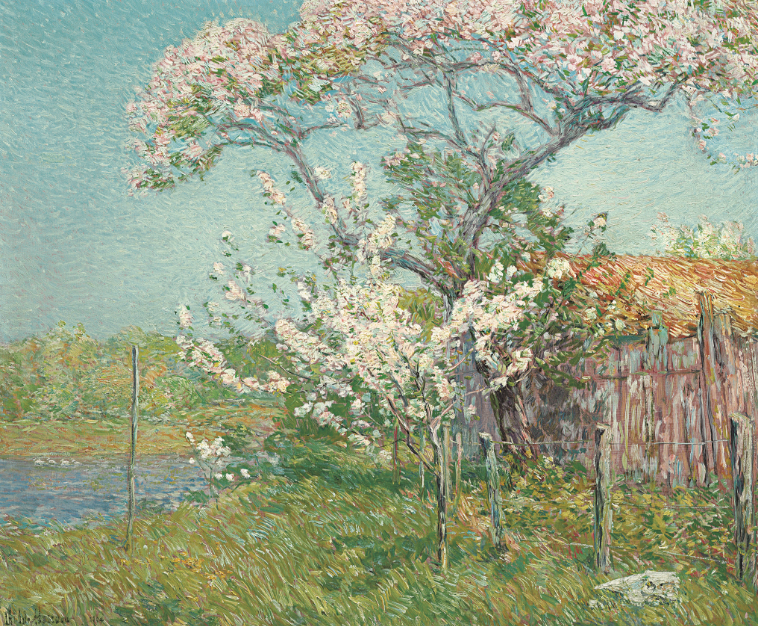 “Apple Trees in Bloom, Old Lyme” by Childe Hassam is a new acquisition for the Florence Griswold Museum. Hassam, an American Impressionist, painted around New England and also in Old Lyme for a time; this painting portrays the workspace he treasured. According to the Florence Griswold Museum, while Hassam was painting in Old Lyme, he wrote to fellow artist J. Alden Weir, declaring, “You are all well I hope and of course you are enjoying that bully studio! You should see mine here, just the place for high thinking and low living.”

“The painting depicts a view behind Florence Griswold’s boardinghouse, with the studio that American impressionist artist Childe Hassam liked to use on the edge of the orchard. The studio’s rustic placement is relayed in Hassam’s canvas, which emphasizes the farm-like condition of Miss Florence’s riverside property…This is a landmark addition to the museum’s collection. ‘Apple Trees in Bloom, Old Lyme’ has a scintillating quality that places it among the artist’s best work.” —Amy Kurtz Lansing, Curator, Florence Griswold Museum

Courtesy of Portland Museum of Art

The Portland Museum of Art’s David E. Shaw Sculpture Park is an unticketed part of the museum, so passersby can stroll through, sit on a bench, and enjoy art throughout the year. Jonathan Borofsky’s “Human Structures (24 Figures Connected)” joined the park’s collection last year. The Portland installation was the first created by the Maine artist, but versions of the colorful sculpture can also be found in other cities around the world.

“With ‘Human Structures (24 Figures Connected),’ Jonathan presents this notion of humanity. It’s an architectural sculpture of humans coming together to build a society. There is a network of these sculptures throughout the world, which makes us feel part of this global network. We tend to think of our community on a local level, but when you think about this same structure being in New York City or in China, it causes us to think of how connected we are and can be through art.” —Andrew Eschelbacher, the Susan Donnell and Harry W. Konkel Associate Curator of European Art, Portland Museum of Art

“Scarred Tree” by Sally Mann is on display from June 30 to September 23, 2018, at the Peabody Essex Museum. 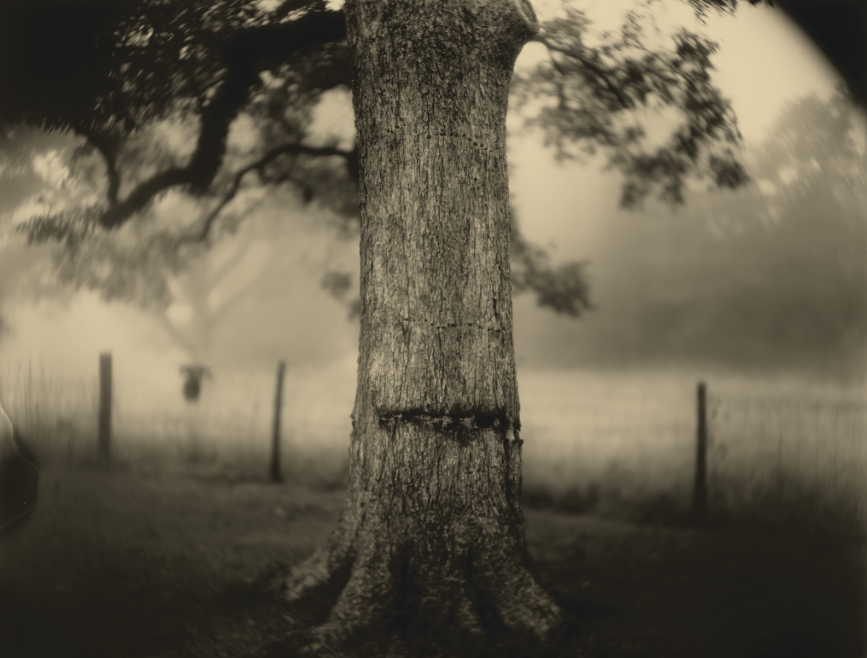 Sally Mann is an American photographer known for her striking black and white portraits of her young family. “Scarred Tree,” which portrays the landscape of the American South, is part of Sally Mann: A Thousand Crossings, a show organized by the Peabody Essex Museum and the National Gallery of Art in Washington, D.C., which will showcase over 125 photographs by Mann.

“In the early 1990s, Sally Mann began to photograph landscapes, first focusing on the rolling hills, rivers and vine-encrusted forests near her home in Lexington, Virginia, and later venturing further south to Georgia, Louisiana and Mississippi. In these works, which Mann made with a large format 8-by-10 camera fitted with a flawed antique lens and paired with a high contrast film, the artist sought to capture what she called the ‘radical light of the American South.’ But even as she explored the lush beauty of the landscapes, she become increasingly aware of how they were witnesses to a larger history of slavery, war, defeat, suffering and injustice. These themes—the refulgent and welcoming light of the South and the wounded land—come together in this magnificent photograph of a stately tree. Focusing directly on a dark gash across its trunk (likely caused by barbed wire fencing), Mann shows us that the wound has healed, but the scar remains, a witness to the violence that has shaped the history of this place. ‘Scarred Tree’ is a compelling example of how Mann marshals all the resources of her art to explore the physical and psychic dimensions of the South.” —Sarah Kennel, Byrne Family Curator of Photography, Peabody Essex Museum 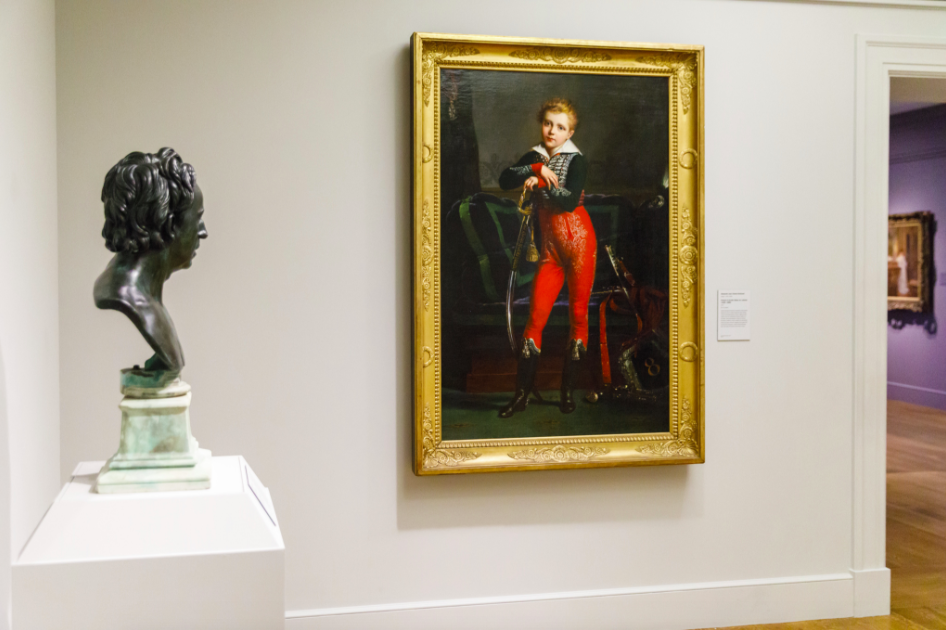 Artist Alexandre-Jean Dubois-Drahonet specialized in portraits of the aristocracy and highly detailed depictions of military uniforms. Two hundred years ago, he was commissioned to do this portrait of 8-year-old Achille Deban de Laborde, dressed in a military costume—a replica of the type that would have been worn by his father, Baron Jean-Baptiste Deban de Laborde. The portrait was commissioned in honor of Achille’s father, who died in the Battle of Wagram in 1809. The accoutrements of the Baron’s military success surround Achille in the painting, including the ceremonial sword he leans on and the Légion d’Honneur medal that hangs at the upper left.

“This charming portrait is a recent acquisition. It was previously held in a private collection, where it was not readily accessible to the public. We are particularly excited to share this painting with our visitors as it is in extremely fine condition—it is unlined and in its original frame—and it tells us much about conventions in 19th-century Napoleonic portraiture. The exquisite depiction of a young boy expands our permanent collection of French paintings of the period, and it is currently displayed nearby Jacques-Louis David’s “Comte Henri-Amédée-Mercure de Turenne-d’Aynac”—also featured in military costume. Together, these works tell a poignant story of civic pride in an age of anti-imperial sentiment.” —Esther Bell, Robert and Martha Berman Lipp Senior Curator, Clark Institute of Art

“Feeding Yellowlegs,” by Elmer Crowell is on permanent display at Heritage Museums & Gardens. 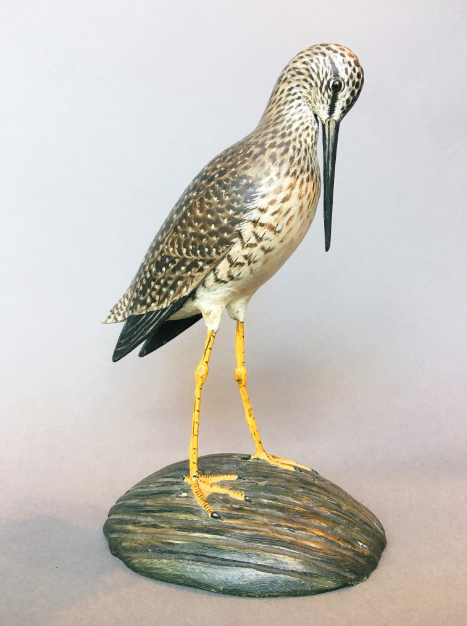 Master decoy carver Elmer Crowell lived in Harwich on Cape Cod and worked out of a humble chicken coop that he turned into a workshop. “Feeding Yellowlegs” is signed and dated 1941. Crowell’s detailed work became nationally recognized and his customers included Henry Ford, W. H. Hoover and the du Ponts, to name a few. While Crowell made many carvings of yellowlegs, they are rarely carved in a swallowing pose like the one obtained by Heritage Museums & Gardens.

“His works are considered to be the finest ever made. While it has often been said that carvers can’t paint, and painters can’t carve, Crowell could both carve and paint. His best work creates a strikingly lifelike, animated form, as if one were looking at an actual live bird. Crowell’s birds are walking, running, sleeping, preening, feeding, swimming and more. His carvings ranged in size from miniature hummingbirds to life-size great blue herons standing over four feet tall.” —Jennifer Madden, Director of Collections and Exhibitions, Heritage Museums & Gardens 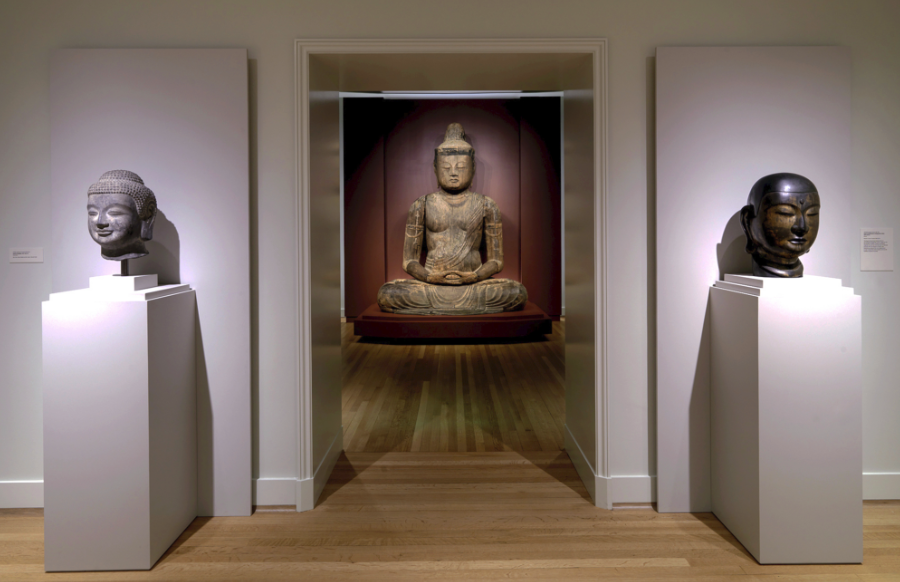 RISD Museum acquired “Buddha Mahavairocana (Dainichi Nyorai)” in the 1930s, making it the largest Japanese wooden sculpture in the United States. Both the artist and the date of its creation are unknown, but curators and historians believe it was once surrounded by other Buddhas, bodhisattvas and guardian figures in a worship temple along Japan’s Inland Sea.

“This Heian period (794-1185) Japanese sculpture is perhaps the largest wooden Buddha of its age in America. Composed of over 30 pieces of wood, this hollow Buddha bears two hidden inscriptions which were most likely written by previous restorers on two separate occasions throughout the sculpture’s history. Seated, with his hands carved in the meditation mudra, this Buddha figure gazed downward, radiating calmness and tranquility; a gift to be shared with every visitor to the RISD Museum!”  —Ingrid Neuman, Conservator, RISD Museum