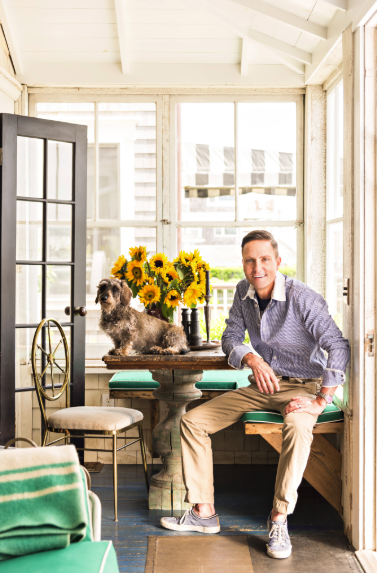 I walked to the end of Miller Hill Road in Provincetown and followed a woodland path lined with twinkling white lights, up the hill to the Hawthorne Barn. The historic structure was the site of a chowder and chili barn dance hosted by part-time Provincetown resident Ken Fulk for the benefit of Twenty Summers, a festival of live concerts, artist residencies, and talks, which pops up Brigadoon-like at the barn every year in May and June.

With rock-star status in the design world, Ken Fulk is famous for his over-the-top parties and events like his “Lord of the Rings”-themed wedding for Silicon Valley titan Sean Parker, set in a giant redwood forest near Big Sur, and the party honoring fashion designer Jean Paul Gaultier at the de Young Museum in San Francisco, which featured a burlesque act. While there were no burlesque dancers at the barn dance in Provincetown, the piles of bandanas at the door for guests, informal line dancing and bluegrass music broke the ice and ensured a good time. Fulk’s thoughtful attention to detail is grounded in the philosophy of living in the moment: “Life all goes by in a moment’s notice, so I want everything to be a celebration.”

Less than 20 years ago, Fulk was staging houses for Realtors in the Bay Area. Today, he heads an army of interior designers, architects, stylists and event planners, with headquarters he calls “magic factories” in both San Francisco and New York. His work has included mansions on Pacific Heights to estates in Provence. He has designed everything from the interiors of private jets to floral headdresses for Dolce & Gabbana.

Despite his glamorous life in San Francisco and New York, Fulk and his husband, Kurt Wooton, love nothing more than hanging out on their porch overlooking Provincetown Harbor, watching the sunrise, curled up with their five dogs. TVs are banished and summer evenings are spent with friends sitting around the captain’s table in the dining room or at dinner parties on their dock illuminated by lanterns and strings of colored lights. Cool and quiet evenings are spent in front of a fire, reading or playing cards.

During a recent visit, I found the house to be welcoming and unpretentious, with dogs underfoot and the scent of sandalwood in the air. It had the feel of a clubhouse with friends casually coming and going. When I asked where I could set down my coffee mug, the answer was “anywhere.” Although home to an Elle Décor A-list designer and filled with treasures, it’s not a museum, but rather, a place to relax.

Wanting to be part of Provincetown’s fabric and to be able to give back, Fulk’s fondest wish is to be viewed as a “townie” and not just “summer folk.” He regularly volunteers his time to organizations like the Provincetown Art Association and Museum, the Provincetown International Film Festival and Twenty Summers. He has also provided fresh designs, inspired by the town’s history, for restaurants like Liz’s Café and Strangers & Saints.

In matters of taste and design, Fulk exhibited early signs of prodigy and genius. He says that since age 4 he frequently arranged his family’s living room, decorated his own room according to the season, chose his own clothes and advised his mother on her wardrobe. With an instinctive self-confidence and unquestioned authority, he became the chief decorator of his family’s holiday traditions. “I was the self-anointed creator of experiences for my family from the beginning,” he says. This meant trimming the tree, setting the table and gathering everyone around the TV to watch “It’s a Wonderful Life.”

Recently, he and Wooton purchased the Mary Heaton Vorse house across the street from their harbor-front home. “We purchased the house to save and protect it, in the hope it can serve as a testament to the disappearing architectural history of Provincetown.”

Vorse, a pioneer of labor journalism, feminist and war correspondent, who lived in town from 1907 until her death in 1966, was a major figure in Provincetown’s cultural history. Her house, which originally belonged to a family of sea captains, was witness to a pantheon of artists and writers like Eugene O’Neill, Edna St. Vincent Millay and John Dos Passos.

Fulk first fell in love with the natural beauty of Provincetown more than 20 years ago, describing it as “this heartbreakingly beautiful sliver of sand at the tip of Cape Cod.” He is inspired by a certain indefinable substance he calls a “secret sauce,” which attracts an extraordinary range of creative people to the town, and he is dedicated to protecting and enhancing Provincetown’s uniqueness as a living cultural landmark.

As he continues to spread his magic dust around Provincetown, this already beloved local figure known for his kindness and generosity and an essential ingredient in its secret sauce, seems destined to be remembered here as not just a famous designer, but also as a “Townie.”

Although he could hang his hat in any of his other three residences—the “tree house” perched on the highest point in San Francisco, the 76-acre Napa Valley ranch surrounded by vineyards and olive groves, or the Tribeca loft—his first love is the house on the harbor in Provincetown. “When I am in P’town, I am like a kid on summer vacation, always beyond excited to get there and heartbroken to leave.”