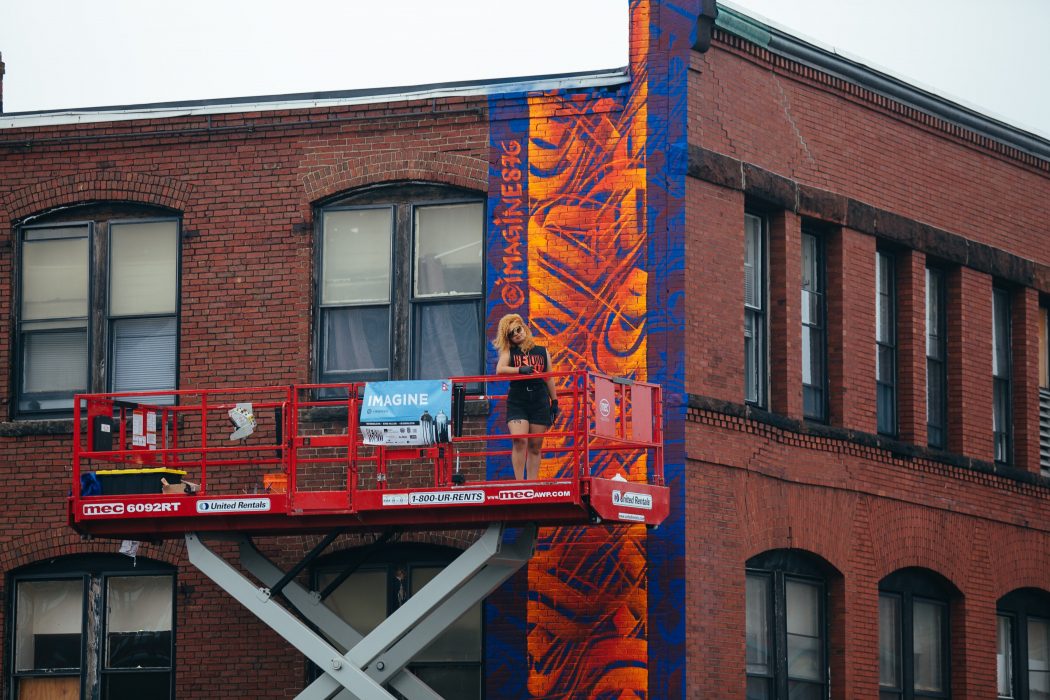 Before Sneha Shrestha (also known as IMAGINE) moved to Boston, she had never seen American graffiti. “My mentor, Rob Gibbs, was one of the pioneers of graffiti in Boston,” she explains. For months, Shrestha would go with Gibbs to watch him paint, bringing along her camera to document the process. “I became mesmerized by the art form,” she remembers. “The idea that there was an art form based on letters blew my mind.”

It took a few years for Shrestha to develop her signature style, but now the Harvard graduate (she holds a master’s in education) is a sought-after graffiti artist who creates intricate, vibrant paintings out of Nepalese phrases. Her mural walls can be seen in public spaces throughout Boston, from Allston to Back Bay. “When I started writing in Nepali, I felt like my voice could really shine,” she says. “I realized I could show who I am as a person, where I am from and a bit about my culture.” Her pieces rely on repetition of a positive phrase—“You can imagine, too” is her most common message—to create vivid, lace-like patterns.

The words are semi-abstracted. “I don’t know if someone who reads Nepali could read everything I write,” she says. However, that’s not really the point. The purpose of her work is to give hope and a feeling of optimism, she explains, which is why she creates her best paintings when she’s in a compassionate and thoughtful mindset. Sometimes, she meditates before she begins to paint, which helps clear her mind and infuse a sense of gratitude into the art-making process.

“I see my work as helping to build culture competency,” she says. “There is so much diversity and culture here. Boston is a city that is creative, young and innovative, but it doesn’t always look like a cool city. My wish is to make that energy visible.”