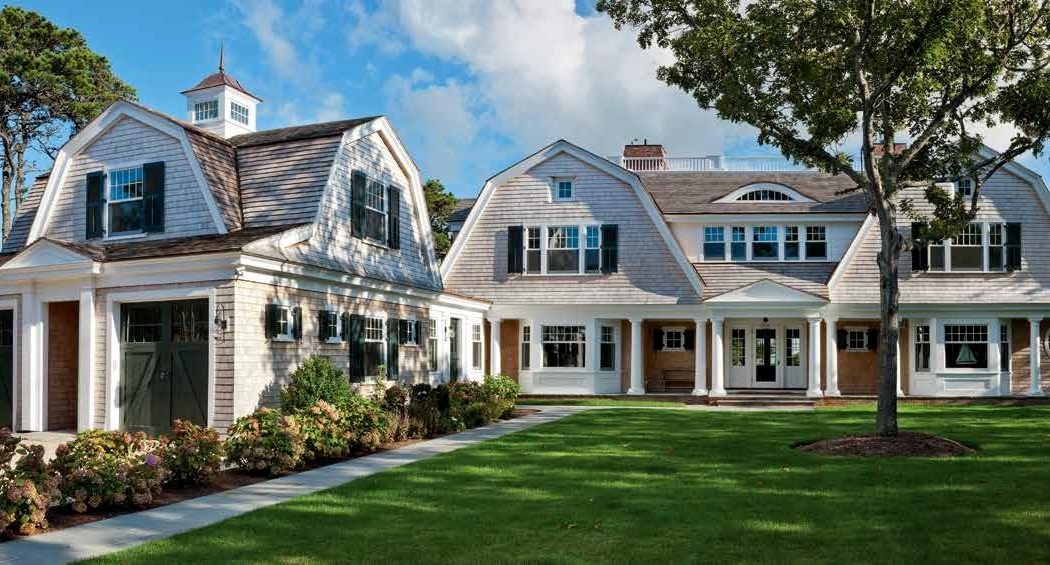 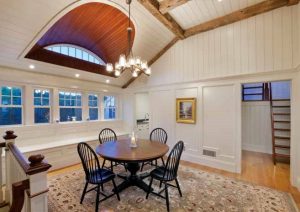 The second-story sitting area of the home featured in the Chatham episode of New England Living TV.

The second episode of New England Living TV takes viewers to the town of Chatham, MA which is located at the “elbow” of Cape Cod. With its shop-filled Main Street, working lighthouse and miles of shoreline, Chatham is the very epitome of Cape Cod charm. Quiet in the winter months, the town’s population increases exponentially during the summer as second homeowners take up residence at their seaside homes.

At the center of the episode is the spectacular gambrel-style home of Steve and Gail which was designed by Architect Patrick Ahearn and constructed by Whitla Brothers Builders. Everything about the home, which is the year-round residence of the couple, takes advantage of its incredible waterfront location.

Ahearn designed the front entrance so that the view of the ocean, visible through the adjoining great room, engulfs visitors from the moment they pass through the front door. Within the wall of windows that runs along the rear, ocean-facing side of the home are French doors from Marvin Windows and Doors that can be thrown open on warm days.

“The outdoors just comes in,” says Gail of atmosphere. 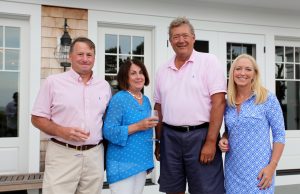 Host Parker Kelley (on right) with homeowner Steve (to Parker’s left) and friends.

With four children and five grandchildren, Ahearn designed Gail and Steve’s home to effortlessly accommodate the couple’s extended family in the summer months, yet still feel warm and intimate when it’s just the couple in the off season.

The open kitchen and great room are where the family gathers, and where Gail and Steve often entertain friends. An expansive master suite, which includes an office and fireplace, is situated on the first floor somewhat removed from the main living areas, creating a private haven for the couple when the house is filled with family.

At the top of the stairs is a casual, open space where “…the kids do puzzles,” says Gail. The widow’s walk that tops the house is another favorite spot for the grandchildren as it Steve’s.

“When you get up higher, the views are even prettier,” says Steve as he takes in the sight of Nantucket Sound.

Steve has inserted his love of gadgets throughout the home, with computers able to control virtually all of its systems. He even managed to include a bit of gadgetry in the shower which has electronic, push-button fixtures from Kohler.

After Host Parker Kelley enjoys a tour of the home with Steve and Gail, she spends some time talking about its design with Ahearn.

“The best thing I can say about this house is it looks like it was here forever, and that was the whole context of what we were trying to do,” Ahearn explains.

This home is one of several Ahearn has built with Whitla Brothers which allows for a seamless process from the design phase through completion. 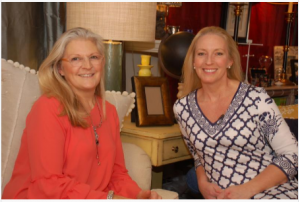 “We see things with the same eyes,” Ahearn says of his working relationship with the construction firm.

Parker also spends time at Simpler Pleasures, the Main Street shop and design studio of Heather McGrath, who worked with Gail and Steve on the home’s interiors. McGrath created interiors that Parker notes are “a feast for the eyes” which have been done in a subtle coastal style.

The final portion of the episode finds Parker at Pisces, the South Chatham restaurant owned by Sue Connors where she is also the executive chef. Sue takes Parker to several of her favorite food and wine shops in town including Chatham Fish & Lobster, where Sue purchases fresh-off-the-boat striped sea bass, and The Chatham Cheese Company where she decides on silky-smooth goat cheese and a crisp rosé.

As Sue makes the most of the oversized Wolf grill and double, wall-mounted ovens preparing dinner for Gail and Steve, and a group of friends that evening, Parker and Gail have a quick meeting with Patrice Milley, the owner of Patrice R. Milley Floral Designers, who drops off the stunning centerpieces for the evening’s dinner party.

As the sun sets on the gorgeous summer day, Gail and Steve welcome friends to join them in savoring Sue’s beautiful meal, and this incredible place they call home. 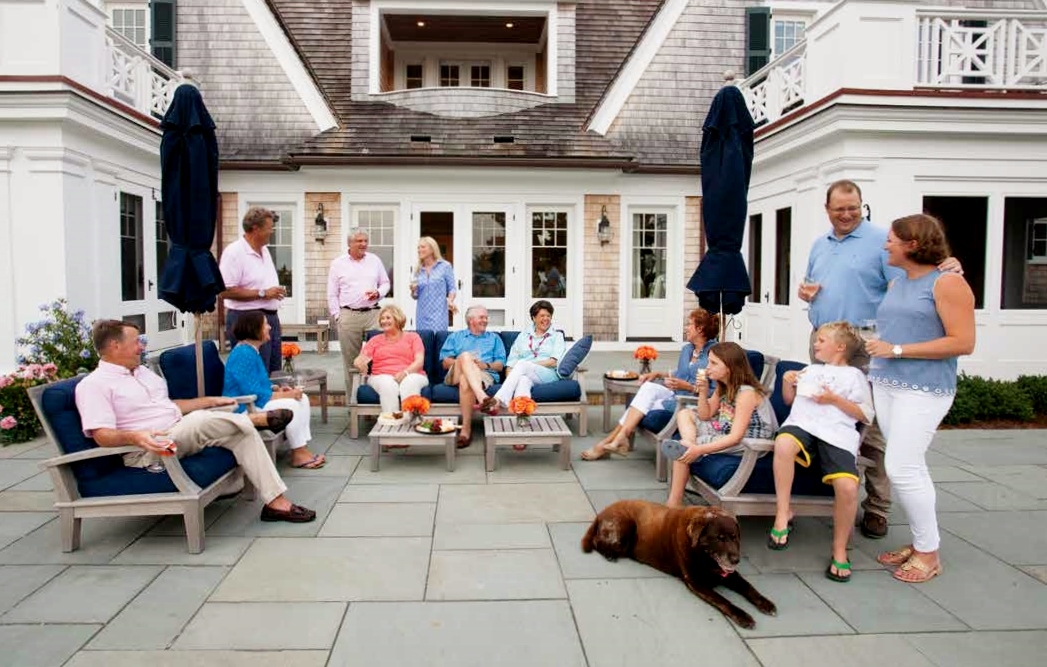