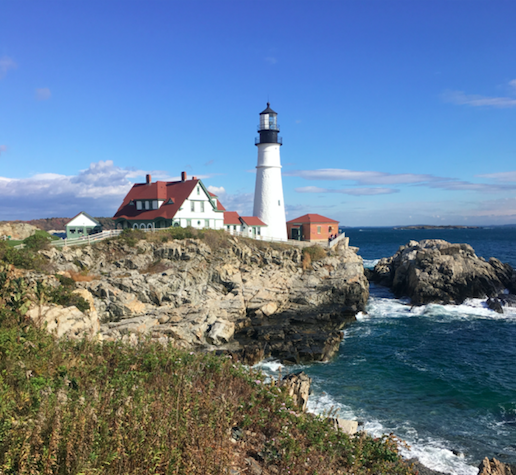 As the cost of gas rises, snagging a good price at the pump has become something of a game for me. My plus-one, whom I’ll call A., is shrewder at this exercise than I am and ups his ante with the GasBuddy app, giving him real-time prices along his route. So, when we were offered the use of an all-electric Chevy Bolt EV for the weekend we accepted faster than you can say fill ‘er up.

Now, where would we bolt to with the Bolt EV? Comparing gas prices can get pretty boring, so the two of us often talk about recipes, cooking and where to eat out. We were well aware that Bon Appétit magazine recently name Portland, Maine, the best restaurant town for 2018. Ergo … our destination! Well within the 238-mile range of our sporty kinetic blue Bolt EV. We’d visited Portland once before, when we’d stayed on Peaks Island, a 15-minute ferry ride from downtown, ambled along the scenic Eastern Promenade, drank local beer and patronized Portland’s shrine to carbohydrates, Holy Donut. This time, we’d find new places.

Thirty-six hours in Portland translates to “So much good food, so little time”. . .  and so many opinions! To cut through the noise, I solicited eating and drinking advice from people who either currently live in the city or have recently called it home. I gave these word-of-mouth suggestions more weight than ratings on Yelp!, Eater and the like. From Middle Eastern mezzes and Belgian fries to corned beef hash and lobster rolls, we hit some high notes, but we couldn’t get to every place I wanted to. I’ll keep the list for our next visit.

The learning curve to master driving a Bolt EV is not very steep. It was fully charged when we picked it up in the Boston Seaport and easily got us to Portland without needing to recharge. A. did the driving since he is in the market for a new vehicle and the Bolt EV is a serious contender. It is clear that electric cars (or EV’s, as they are known) are the future. Combining the quiet of an electric motor with crisp, responsive pickup and handling, in no time he was “hypermiling” (safely and responsibly, of course), maximizing the transfer of energy back into the car’s battery.

I focused on feeding us. We arrived at dinner time Friday and handed the Bolt EV over to the valet parking attendant at the harborside Courtyard Marriott. The young man connected it to the electric charger, bringing to mind tying a horse to a hitching post in the days of saloons and shootouts.

To stretch our legs, we hoofed it to Baharat, about one largely uphill mile from our hotel, in the up-and-coming east end of town. The newbie restaurant’s Middle Eastern menu appealed to us and the decision clincher was when my friend Caroline, a photographer based in Portland, mentioned that bartender Arvid “makes a mean craft cocktail, infused with spices and all kinds of good things.” Indeed, he did! My “Destroy. Rebuild. Destroy” (inspired by the deconstruction of a dark & stormy) had rum, fresh ginger and turmeric, lime and a smidgeon of carbonation. A. ordered a local Rising Tide beer (the brewery is just a block or so away) and the two of us shared a bowlful of spiced crispy chickpeas, falafel wrapped in Iraqui flatbread and seasoned with tahini and tzatziki, zingy pickled veggies and, our favorite, za’atar deviled eggs with smoked paprika and zhoug, a spicy and fragrant green sauce often described as a Middle Eastern pesto. My recommendation: get there when it opens at 4 p.m. ‘cause this place is burst-at-the-seams popular!

Saturday morning on Commercial Street near our hotel, the iconic Becky’s Diner sign switches on at 4 a.m., 362 days a year. The red neon letters drew us to the homey spot where regulars and tourists alike sit at a long Formica counter and in red pleather booths, surrounded by knotty pine and good cheer. Resisting blackboard specials like a tortilla breakfast sandwich and stuffed Italian French toast, I opted for a couple of the spot’s staples, corned beef hash and wild Maine blueberry pancakes, and A. enjoyed a broccoli and swiss omelet.

Something of a coffee snob, I wanted to double up on caffeine so we strolled to Bard Coffee, which roasts beans in-house for their single-origin brews, for a latte. Then we headed off in the Bolt EV for Portland Head Light and Fort Williams Park in Cape Elizabeth, 15 miles away. In operation since 1791, the lighthouse is one of the most picturesque and most frequently photographed in the U.S., and its setting on the rocky coast is breathtaking. I was struck by the irony of driving an electric car to this 200-year-old historical monument where whale oil once fueled the lamps.

Saturday was the grand opening of Root Wild Kombucha, so we drove back into town to join the celebration. Thanks to the Bolt EV’s built-in Wi-Fi hotspot, I got a jump on writing this piece, the first time I’d ever been able to do Internet research in the car using my laptop—a game changer for sure! Root Wild is on Washington Street, something of an up-and-coming restaurant row in Portland. We settled at a high-top in the newly renovated industrial space, for a flight of kombucha that included four flavors: Vanilla Rooibus, Elderberry, Ginger with Lemon and Cayenne and Beach Rose. A new appreciator of this non-alcoholic-yet-festive beverage, I predict that founder and “boochmaster” Reid Emmerich has a winner on his hands.

Still and all, Portland is known for its craft beer, so we walked down the street, passing the popular Vietnamese restaurant Cong Tu Bot and trendy shipping-container housed shops, to Oxbow Blending & Bottling, where we enjoyed a dry, rustic farmhouse ale-style beer on the patio along with a paper cone loaded with Belgian-style fries from James Beard award-winning restaurant Duckfat, which has a take-out window here.

Somehow, we had spent almost a day in Maine sans lobster, so it was high time to do restitution. First stop: Lucky Catch Cruises in the Old Port section of town, where we joined some dozen other adventurous souls on the 40-foot “Lucky Catch” for a hands-on lobstering excursion out in Casco Bay. We helped pull up traps, learned lots about the Homarus americanus (including how to tell the males from females), and even had the option of buying just-caught lobsters to have cooked for dinner at a dockside restaurant. A. and I chose instead to have dinner at the lively Highroller Lobster Company, which started out as a food cart three years ago and claims as its mission to be “dedicated to bringing Portland the lobster roll it deserves.” Having personally savored it, I can tell you that means a locally baked brioche bun stuffed to the gills with fresh lobster meat and served with a choice of nine sauces (most popular are curried ketchup and lime mayo). To cap off our meal, Mt. Desert Island Ice Cream was fortuitously just a few blocks away so we stopped in for scoops of four unbelievably delicious artisanal flavors: Pumpkin, Indian Pudding, Butterscotch Miso and Bay of Figs. I learned later that President Obama helped spread the word about this small-batch ice cream named one of America’s Top 25 Ice Cream Parlors by “Food & Wine” magazine.

Overnight, the temperature dropped into the forties, so the Bolt EV’s heated steering wheel (seats, too) was a welcome feature on Sunday when we got in to drive to breakfast at Rose Foods, a ballyhooed Jewish deli known for its distinctive bagels, somewhere between a New York- and a Montreal-style piled high with myriad combinations of cream cheese, smoked salmon, veggies and more. We thought we’d stock up on Holy Donuts before heading home but the line for these famous, hand cut-potato donuts was daunting so we changed course and swung by Two Fat Cats Bakery instead. Famous for their pies, Two Fat Cats’ seasonal special was New England Bog: Wild Maine blueberries and cranberries, sprinkled with an oat crumble and specks of bittersweet chocolate. Tempting as this was, we opted for a more portable blueberry lemon scone to share on the way to lunch, lest hunger pangs set in.

So, we’d checked off beer, coffee, lobster and a lot more, but wine being my favorite potent potable called for a stop at the Cellardoor Winery at Thompson’s Point on our way out of town. Arriving a bit before Cellardoor’s noon opening on Sunday, we took advantage of the Bolt EV’s touchscreen “infotainment” display to listen to a podcast discussing the very car we were driving.

As the passenger on this trip, I participated more energetically in the wine tasting than A., but we both agreed that these were very special wines. Here, I have to give a shout-out to Allison Berguin, a native of Strasbourg, France, whose charming accent only made the descriptions of each pour that much more delightful. She had us at “I saved this one just for you,” proceeding to taste for the very first time their Pinot Noir 2015. Hollywood couldn’t have scripted a better ending to our Portland getaway!