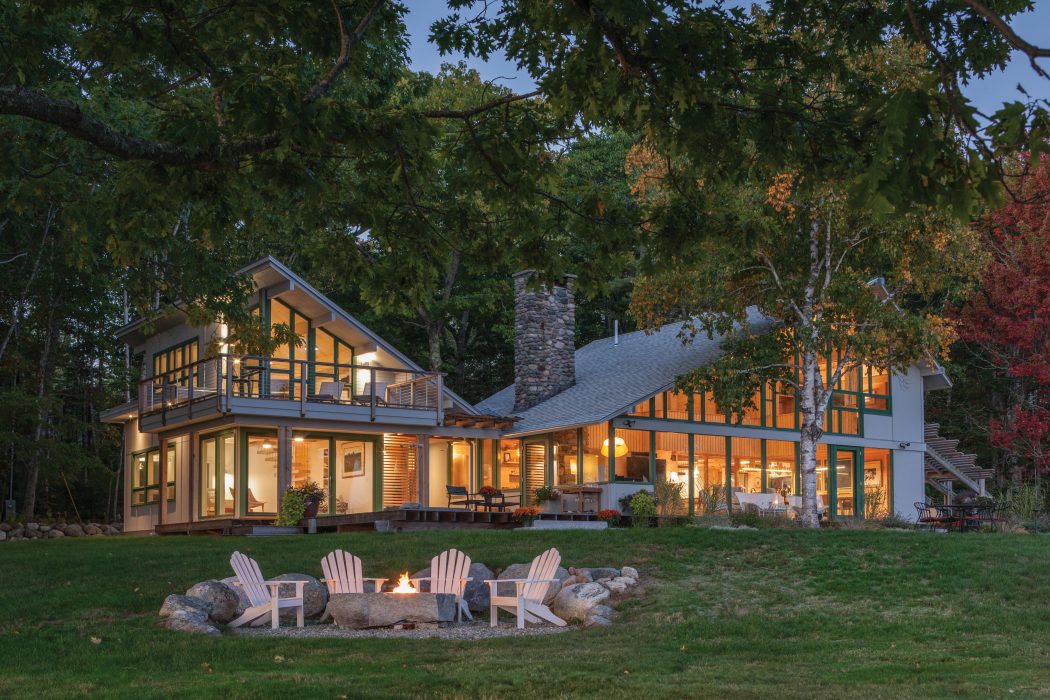 Maine Camp Renovation Pays Homage to the Past and the View

Any northern Mainer worth his salt can tell you about the golden hour. The lighting phenomenon that occurs each evening and softly bathes the shoreline of this stunning, rugged terrain in an amber glow. For waterfront homes with fortunate western exposures, the departing sun puts on an incomparable show. On Blue Hill Bay’s Oak Point peninsula in Trenton, Maine, one such home belongs to Jud Starr and his family.

Starr’s parents built the modern shorefront camp in 1962 and they carefully designed their home to take full advantage of the light and view. “As the sun sets, the light reflects off the seaweed-covered rocks and creates a glow very particular to this area,” describes Starr.

His parents collaborated with architect Cooper Milliken to design the family camp with enormous walls of glass that as Starr notes, “remove any feeling of separation from the outside.” The result, says Starr, is that at the end of the day, every inch of the interior is illuminated in such a way that it seems to be “glowing from within.”

When it came time to renovate and expand the old home, it is no wonder that Starr and his longtime partner, Ginny Dean, wanted to honor and retain as much as possible of the original form and vision. For help with this, they turned to the husband-and-wife team of William Hanley and Heli Mesiniemi of WMH Architects in nearby Northeast Harbor.

“It was clear from the start that this house is all about the windows,” says Hanley. “Therefore, before we even sat down to start sketching out designs, we called our local Marvin Windows representative to help give us ideas about what products we could use to help the addition seamlessly integrate into the existing residence.”

While the owners opted to keep the original portion of the house as it was built—without heat or insulation— they recognized the need to adapt the newer part to withstand the harsh Maine weather in order to extend their use of the home.

“There’s a saying up here that Maine has 10 months of winter and two months of poor sledding,” jokes Starr. For that reason, the architects chose Marvin Double-Glazed, Low-E windows and doors in the addition and Marvin Direct-Glaze, Single-Pane Casement and Awning windows in the older portion to retain the authentic character.

Inside, the addition blends seamlessly with the original house. “Anyone who had not been here before the renovation would not be able to tell where the original structure ends and the new one begins,” says Dean.

At 3,800 square feet, the finished home is now nearly doubled in size with over 80 windows capturing glimpses of Acadia’s rolling mountains, pine-studded islands and the open sea beyond. Starr is thrilled with the outcome, and he is looking forward to many Maine adventures with his son, Alexander, and his two grandchildren—the fourth generation of Starrs to enjoy the family legacy and the golden hour on Blue Hill Bay.