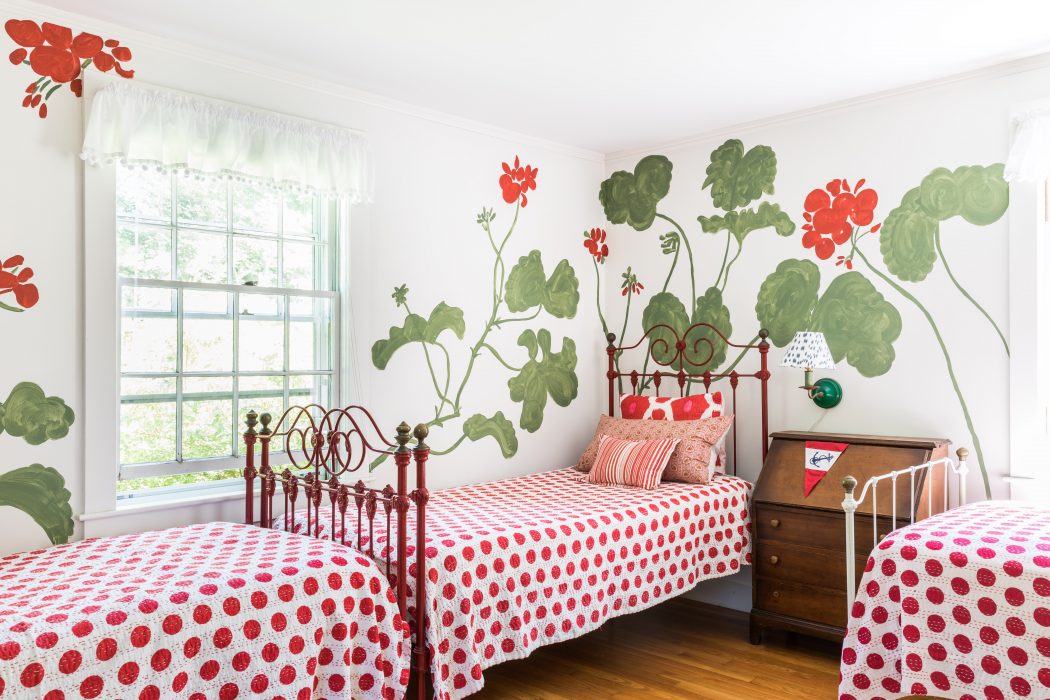 Artist Kate Schelter transforms the simple elements that surround her into vibrant paintings with deep resonance.

Kate Schelter says she “grew up with a paintbrush in her hand.” Indeed, there’s endless evidence to support Schelter’s life-long creative streak, including a photo on her website of her as a big-smiled seven-year-old wearing a curtain valance belted with a ribbon that Schelter deems her “first handmade mini-skirt.”  Another snapshot features an abstract watercolor painting that earned Schelter a Scholastic Art Prize in 10th grade.

After graduating from the Rhode Island School of Design in the mid-1990s, Schelter, a long-time New Yorker who now lives in Pennsylvania and spends summers on Cape Cod, worked as a stylist for fashion labels and magazines including Vanity Fair and Vogue. By 2007, her primary focus was working as a creative director on brand campaigns for clients including Architectural Digest, Bonpoint, and Toyota. As a brand and image consultant, Schelter also works for the hospitality industry, including the storied Colony Hotel in Miami, where she reimagined its entire essence, designing all collateral and amenities—from the in-room stationery and restaurant table linens to bikes and surfboards.

Gradually, Schelter’s clients tapped into her innate artistic sensibility and began asking her to create art for their brands. At the Colony Hotel, for example, her art not only adorns walls, it was made into a fabric that’s upholstered on the seat cushions of the hotel beach buggy. Her evocative watercolors struck a larger audience and soon Schelter was picking up her brushes regularly to paint small works for commissions. Her first solo painting exhibit, curated by John Derian, took place in 2014, and interest in her artwork hasn’t slowed since.

“I paint what I love. I use the same muscle I use as a fashion stylist and creative director: my gut,” says Schelter. She’s inspired by everyday items, the objects that surround her. “I might paint a pair of shoes that I love or my bike,” she notes. These simple items in the backdrop of her life are portrayed vividly with a touch of whimsy:  the condiments set out for a picnic; freshly washed kale in a colander; retro cars that represent her 1980s childhood; hydrangeas surrounding her home on the Cape.

Schelter’s paintings resonate with a large audience in part because they are relatable and exude a classic sense of style that hits a nostalgic cord for many, especially those with New England ties who recognize her subjects—L.L. Bean tote bags, Nantucket baskets, wooden tennis rackets, fisherman sweaters, and Sperry sneakers—as iconic symbols of the region.

Travel has long fueled Schelter’s creative energy and she paints her paintbrushes wherever she goes. “When I look at a new place, I’m taking in more details, observing it with fresh eyes in a way that someone living there wouldn’t,” she says. In a similar vein, she enjoys the change of seasons and the way her senses are heightened when she arrives on Cape Cod every June for the season.

Schelter grew up spending summers in the area and several years ago she and her husband bought a house down the road from the one her mother lives in. “As soon as we get there, we open the windows and keep them open,” she says. “I paint outside on the Cape and while I could do that in other places, for some reason, I’m not drawn to.”

Schelter captures sunflowers at a nearby farm where her children—she has three of them—run among the six-foot-high stalks. Other times, she depicts the flora in her backyard or the natural elements she observes in a nearby landscape. “I have this big board that I put in my trunk and drive off to paint in a field. It’s an amazing feeling,” she says.

Schelter’s creativity extends to the interior design of her homes. On the Cape, her aesthetic has a timeless simplicity punctuated by artful flourishes; in a twin bedroom, for example, walls feature a mural of free-flowing geraniums in her signature style.

She paints with her eight-year-old daughter on occasion and while her little one is hard on herself for not being as good as her mom yet, Schelter loves her daughter’s own evolving personal style. “When my daughter wants to draw a particular item, she often does google searches that come up with step-by-step tutorials,” says Schelter, who encourages her not to follow such directions, but rather to create her own imperfect version. “When you copy someone else’s work, it’s not your own style anymore,” she says. “It’s important to give yourself the freedom to just create.”