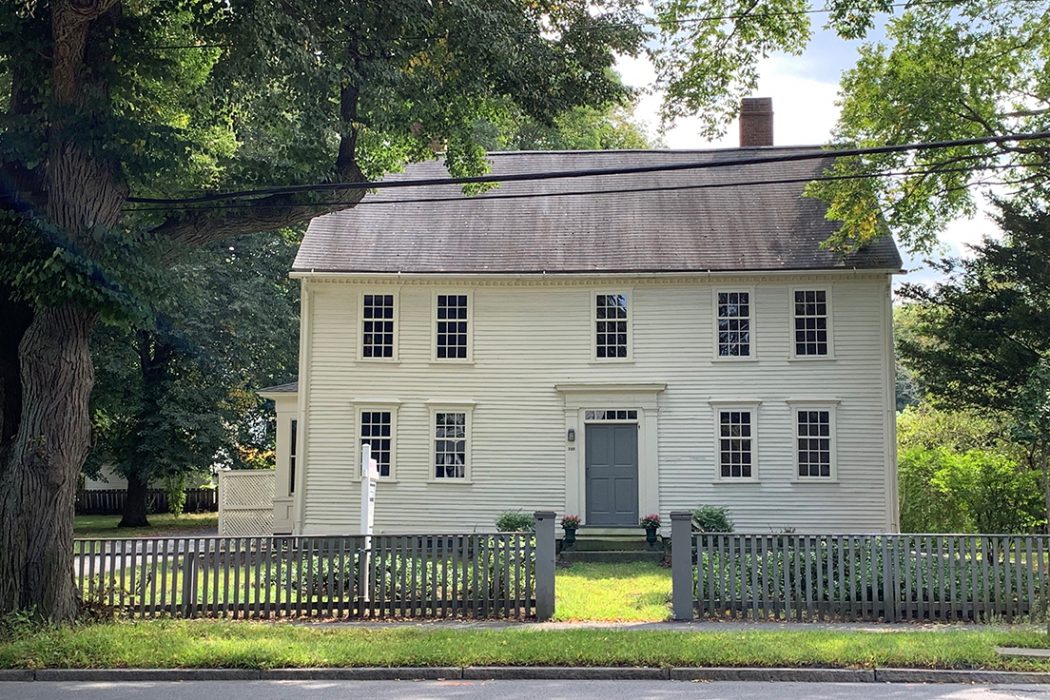 “Old homes always have a great story,” says Amy Pasley, one of the team of realtors at Senkler, Pasley & Dowcett, a Coldwell Banker Residential Brokerage in Concord, MA. The town of 18,000 is currently in the throes of reinvigorated notoriety as the setting for a particularly beloved story: Concord native Louise May Alcott’s novel Little Women.  The most recent film version of the book, directed by Greta Gerwig and nominated for six Academy Awards, and won one, for Best Costume Design, used Alcott’s hometown as a base for production.
During the filming, which took place in 2018, many of the cast and crew needed to find local homes to stay in, and the Senkler, Pasley & Dowcett team, which in addition to Pasley includes Peggy Dowcett and founder and president Brigitte Senkler, was instrumental in assisting the production team.
“We placed Gerwig, actor Timothée Chalamet and producer Amy Pascal as well as some of the support staff,“ says Dowcett. “It was a bit crazy as everyone had to find rentals in short period of time, but we know Concord really well and we identified good, available houses.”
With an office located in a circa 1880 building right on Monument Street in downtown Concord, the Senkler, Pasley & Dowcett team are situated perfectly for sharing the attributes of this beautiful and historic town with home buyers.
“Concord gets up to a million visitors a year,” says Dowcett. Tourists tend to come to see Alcott’s Orchard House museum, the Old North Bridge, which was the site of the Battle of Concord in the American Revolution, and Walden Pond, home to writer Henry David Thoreau’s cabin. “ It is nice to have the historic and literary aspect of the town showcased in the film, but there is also a vibrant downtown with new restaurants and more to do than ever before,” she says.
Among the team’s current listings are two antique homes, each with its own style and appeal. 325 Main Street is a classic Georgian Colonial built in 1767 featuring original architectural details such as fluted columns, window seats, wide pumpkin floor boards, and exposed beams. “Known as the Captain Samuel Jones house, it is a quintessentially historic home such as you can find here in Concord,” says Dowcett. The five bedroom home has been carefully preserved and owned by the same family since 1949. “It is an authentic and unspoiled property which can be modernized on the inside to suit a buyer’s taste.”
Slightly further away at 285 Elm Street, but still walking distance to downtown, is a beautifully renovated 1910 Georgian Colonial, with five bedrooms and four and a half baths, sitting on more than an acre of lush grounds. While still retaining elegant period details, the home boasts an impressive upscale kitchen and remodeled baths, as well as updated electric, heating, AC and plumbing systems.
“Both of these homes are perfect for the kind buyer who seeks out history,” says Pasley. “I think homes come with a soul to them, and the old home buyer is also buying the house’s meaning.” When properties need to be brought up to current marketplace standards, the Senkler, Pasley & Dowcett team works closely with buyers and make referrals to skilled architects.  “ It is important for the town of Concord and we support the buyers as they move the properties forward. ”  While the Senkler, Pasley & Dowcett team does not exclusively list antique homes, they are very well suited to represent them. “We are unique in the way we show these kinds of homes and how we tell their stories.”
Coldwell BankerColdwell Banker Residential BrokerageMassachusettsReal Estate