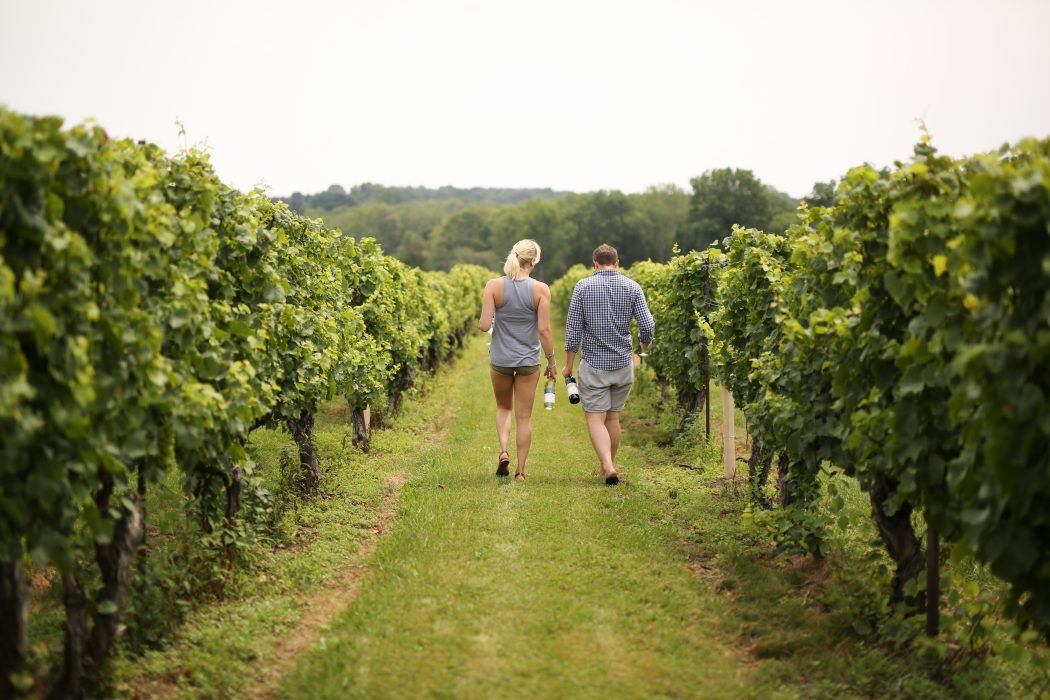 For those who savor bold reds, crisp whites and sparkling rosés, southeastern New England’s Coastal Wine Trail is a must. The region’s maritime climate and rich loamy soils lend themselves to producing a host of praiseworthy wines that tour takers can sample as they self-guide their way through Massachusetts, Connecticut and Rhode Island, stopping in historic cities and quaint towns. Fourteen wineries dot the route. Here we’ve highlighted five for your itinerary, plus other recommendations in the area: 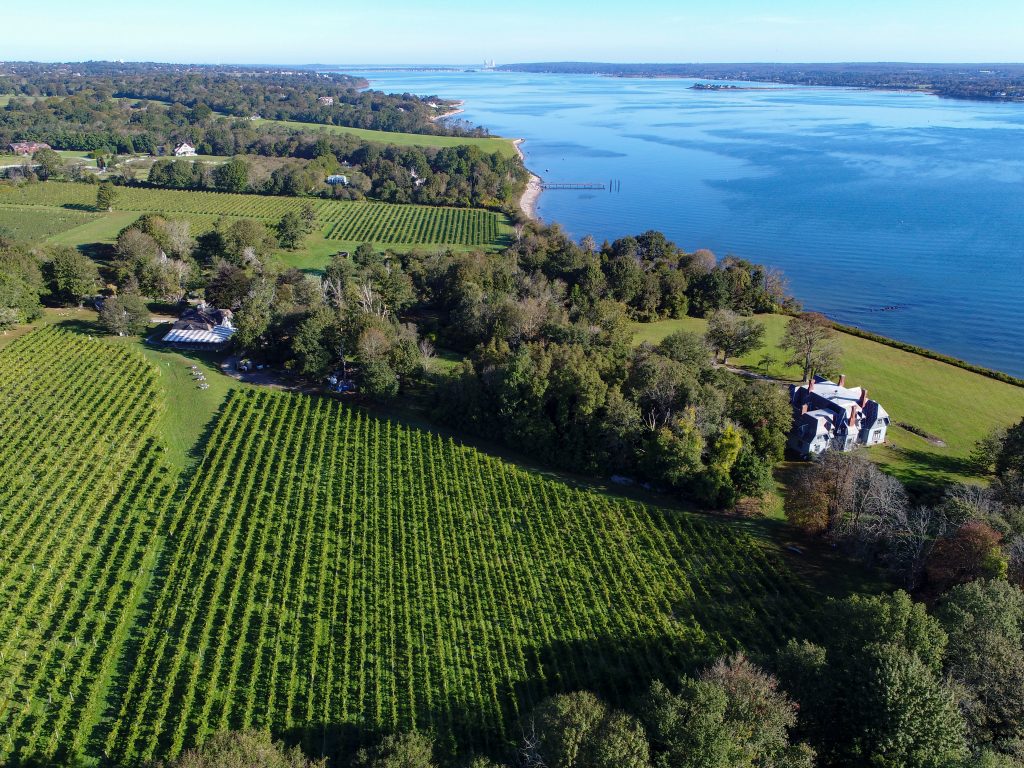 In Newport County, Rhode Island, at Portsmouth’s Greenvale Vineyards, Winemaker Richard Carmichel—with help from “resident grapes-keeper” Hever Ortega—produces eight tasting options, versatile Skipping Stone white being the most popular among them. Visitors also enjoy a spectacular oaky Chardonnay as well as one that is fruitier for having shared time between stainless steel and oak barrels. Other whites include Pinot Gris and Albariño, with flavors of peach ginger and lemongrass, and for reds they make Cabernet Franc, Merlot and Malbec. New this year is Ramato, a dry rosé. Plans are in the works to introduce a vermouth, and they are experimenting with beer. Visitors are welcomed to roam the organically managed vineyard and farm, which has been in owner Nancy Parker Wilson’s family since 1863. Located on the banks of the Sakonnet River, five miles north of downtown Newport, the winery is open year-round and offers daily 2 p.m. vineyard tours, plus jazz sessions every Saturday from 1–4 p.m., May through mid-December. Special events include the Restoration Celebration and the Harvest Festival. Of her winery, Wilson says: “It’s on the National Register of Historic Places, so there’s a beautiful preciousness about it.” 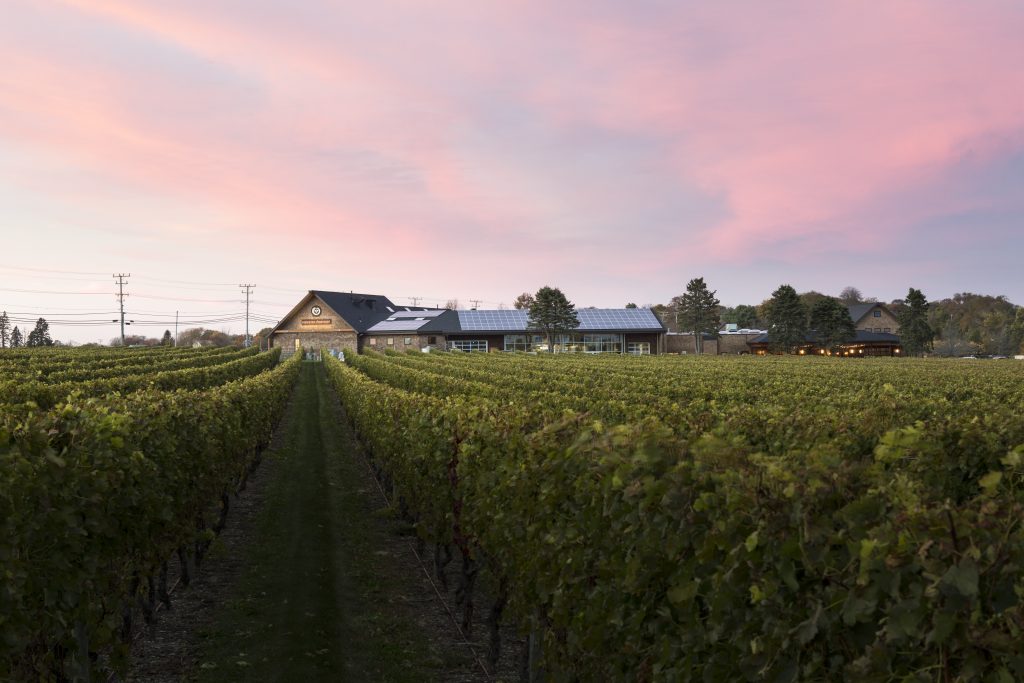 Family-owned and operated Newport Vineyards, in Middletown, Rhode Island, produces more than 30 different varietals (mostly whites)—all of which are made using 100 percent estate-grown grapes. Fifty acres of vines are cultivated on 75 acres of preserved farmland—a bucolic setting for tastings. “We consider ourselves an agritourism destination,” says Cassandra Earle, director of marketing and events, who describes the tasting room as “refined rustic” with its polished concrete, wood beams, and reclaimed garage doors. “Whether you are indoors or outdoors, the architects designed the building to have a connection to either the vineyard or the tank room operation,” she notes. While here, visitors can order light fare at the Vineyard Café, known for its artisan cheese board and vineyard view, and dinner at Brix restaurant, featuring seasonal scratch cooking by chef Andy Teixeira. A summer-long live music series runs Saturday and Sunday from 1–4 p.m., and from mid- to late June, on Wednesday evenings from 5–8 p.m., the Fireside Music Series offers ambient entertainment around the fire pits on the patio. There’s also a Spring Festival, a year-round Saturday Farmers Market, and more than 30 calendar offerings.

While in Portsmouth visit the Green Animals Topiary Garden—located on a seven-acre estate overlooking Narragansett Bay, it is the oldest and most northern topiary garden in the United States. Notable Newport mansions include Doris Duke’s Rough Point Estate, Hunter House, The Breakers, and The Elms. For dining in Newport, Stoneacre Brasserie on Washington Square, The Clarke Cooke House, and Scales and Shells are sure to please. Bristol, five miles northwest of Portsmouth, has been described as a smaller version of Newport, and is quickly becoming a restaurant mecca, as is nearby Warren. Both towns are on the historic route to Providence. Thrill seekers will appreciate Bird’s Eye View Helicopter Tours and Skydive Newport on Aquidneck Island, and the new East Island Reserve Hotel’s cottages make for a lovely weekend stay. 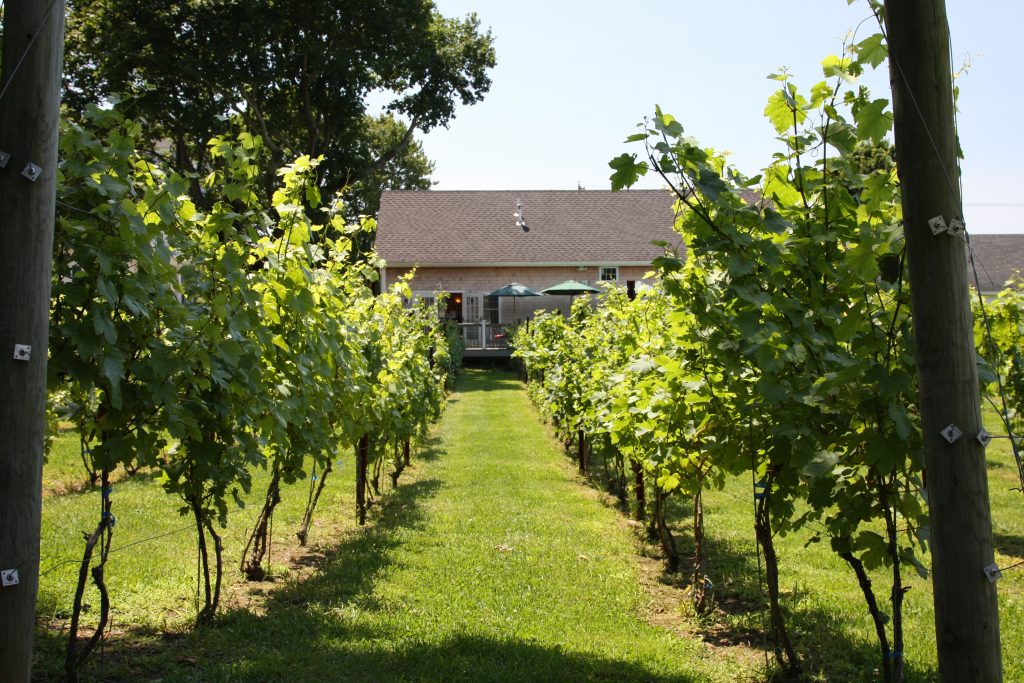 When in Westerly, stop into Langworthy Farm Winery, owned by Joe and Gail Sharry. Built in 1875 on the historical homesite of Governor Samuel Ward, the vineyard enjoys close proximity to the ocean as well as to the coastal towns of Weekapaug and Misquamicut. There are over a dozen wines on offer; visitors are repeatedly drawn to Rhody Riesling, a dry wine with “apple and peach aromas and crisp floral notes”; Napatree Cabernet Sauvignon, which is aged in French oak barrels; and Weekapaug White, a citrusy blend of Chardonnay and Pinot Blanc. Full of natural light and pinewood accents, the tasting room affords views of the large stainless steel tanks in which the wine is processed. Tasting events are held on the wine room’s front porch, and annual offerings include Oysters on the Deck, a Cheese & Olive Fest, an art festival and special barrel tastings. Visitors often make a weekend of it by booking rooms at the Langworthy Farm Bed & Breakfast, a stately three-story Colonial with four rooms and two suites.

For Victorian architecture, eating and shopping, spend an afternoon in downtown Westerly. Wilcox Park is the place for strolling and picnicking; the green has 14 manicured acres dotted with fountains, gardens and sculptures. Check the park’s schedule for concerts, festivals and markets, and nearby the town library has rotating art exhibits. Of course, so much time in town requires a retreat to the shore, and the southwestern tip of Rhode Island has many sandy beaches. Watch Hill and Misquamicut are two busy summer escapes, where you can spend the day at the beach, dine alfresco with a waterfront view, pick up a few treasures at local antique stores and visit the iconic Watch Hill Lighthouse and Museum. Perched above the village is the historic Watch Hill Inn, its grand yellow facade reminiscent of the golden age of travel, but inside it’s modern luxury—and now very colorful with its newest addition, the Lilly Pulitzer suite. 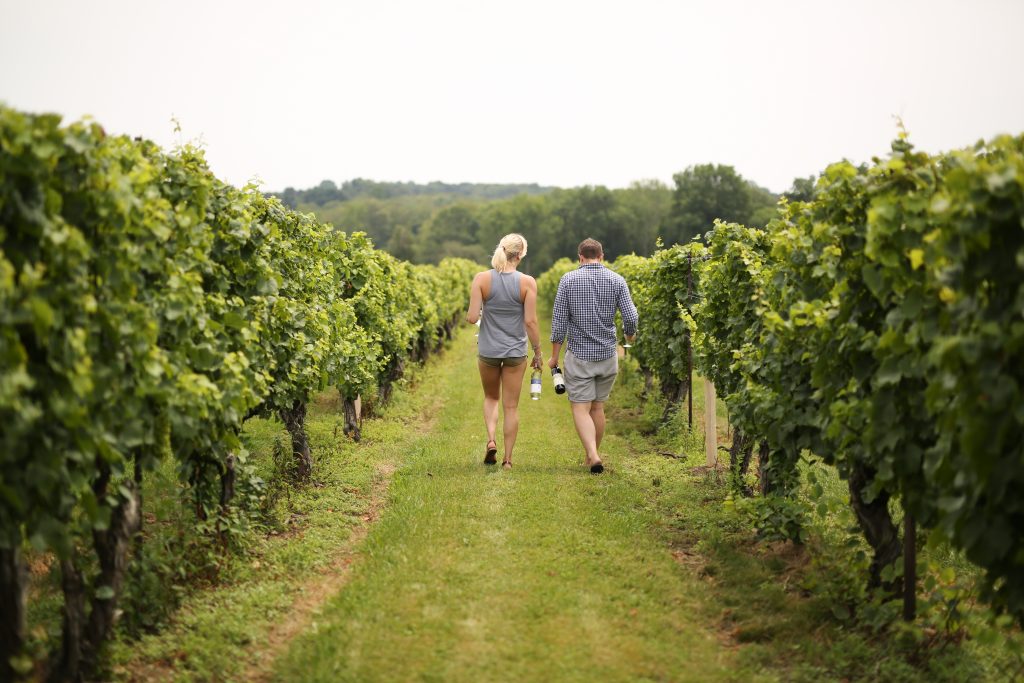 Not-to-miss wineries in and around Mystic, Connecticut, include Stonington Vineyards, the state’s third oldest vineyard, and a founding member of the Connecticut Wine Trail. Focusing on whites, they produce six wines including two Estate Chardonnays, a Riesling and two proprietary blends, Seaport White and Triad Rose. “We specialize is truly Southern New England wines,” says Ebbie Young, tasting room and events manager. They also make an award-winning Cabernet Franc, which is a common red grape grown in cooler regions. Situated on 58 pristine acres—13 of which are cultivated—Stonington’s Vineyards is a boutique farm-winery, where all the work is done by hand. Year-round daily tastings are offered from 11 a.m.–4:30 p.m., and complimentary winery tours are provided daily at 2 p.m. A Summer Concert Series, which Young describes as “a mini Tanglewood,” runs every Fridays in July and August from 6–9 p.m., and their annual Food & Wine Festival takes place in late September.

At Maugle Sierra Vineyards in Ledyard, Connecticut, Paul Maugle and his wife, Betty, grow St. Croix and Marquette red grapes and Cayuga white that go into their wines, including a Riesling, Chardonnay and Cayuga blend, called Rendezvous; and St. Pepin, a late-harvest dessert white—“great for cold winter nights.” Located a half mile from the ocean, the 18th-century vineyard enjoys a temperate climate similar to that of Oregon. “We get a lot of early morning fog on the grapes here,” Paul says, noting that they also source grapes from elsewhere. “It gives us a chance to bring in Rieslings from Long Island or Vidal blancs from Massachusetts—so you get a diverse cast—not just [what we grow] here in Connecticut. We try to deliver a taste of New England in each sip.” Visitors sample wines in the 2,050-square-foot Sierra Sunset Room and Patio, which is located in a 1744 farmhouse overlooking 97 acres of land. Live music is featured year-round on Fridays and Sundays, and given the region is rich with oyster bays, Oysters on the Deck is a popular offering, as are the cheese and olive tastings.

Mystic is brimming with itinerary items. Nature lovers will want to explore Dodge Paddock/Beal Preserve. For eats, hit French-inspired Sift Bake Shop; rustic-chic Engine Room for beers, burgers and bourbon; Dog Watch for barbecue; and Captain Daniel Packer Inne for a historic tavern atmosphere. Other popular foodie destinations include Anthony J’s Bistro, Red 36 and Breakwater on Stonington Harbor. And The Whaler’s Inn and The Inn at Stonington offer good places to lay your head at night, as does Spicer Mansion, a Relais & Chateaux property.