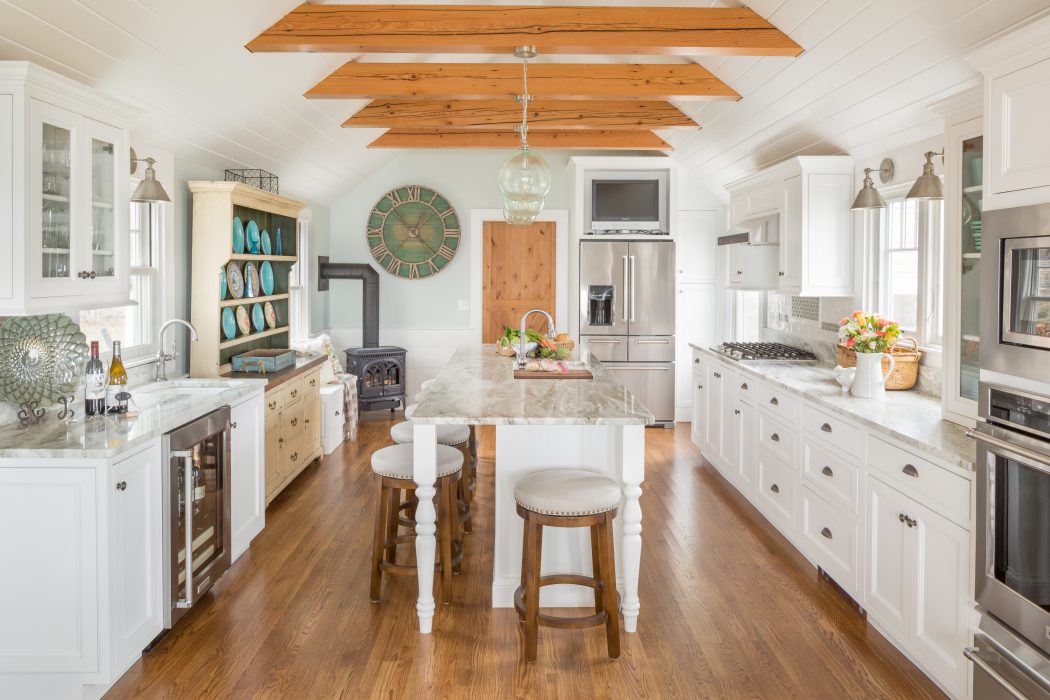 A 1955 Orleans kitchen and bath went from small to spacious.

Evan and Lois Evans, who own the Provincetown Inn and the Outer Reach Hotel, purchased their Orleans home in November 2015. However, the original space felt cramped and the homeowners wanted more room to breathe. With the help of Mark Kinnane, executive vice president of Orleans-based Cape Associates, and Robin Decoteau, kitchen and bath designer at Supply New England’s Kitchen & Bath Gallery, an entirely new design concept emerged, starting with the kitchen.

Formerly, a wall separated the kitchen from the dining room. The team removed the wall to create a wide-open design. “We’re talking about a kitchen, but we’re also talking about a workspace and an entertainment space,” says Decoteau.

A low ceiling also felt too confining for the homeowners. “The kitchen felt too chopped up, too compartmentalized,” says Lois Evans. Kinnane, who built the Evans’ previous home in Eastham, agreed. “We gutted everything from floor to ceiling,” he says. “Lois wanted a cathedral ceiling, so we had to reframe the roof to allow for that.” Once the ceiling was reconfigured, Kinnane added reclaimed wooden beams from Cataumet Sawmill for structure.

Two pieces Evans wanted to have in her kitchen were a treasured hutch and a wood stove. “Instead of designing the kitchen and then trying to figure out where they’d fit, we designed the kitchen around them,” says Decoteau. To create more space, the Kohler Indio sink was installed into the kitchen island rather than in the traditional location by the window. The sink is finished with enameled cast iron and the faucet is a Kohler Artifacts high-arch, pull-down spout faucet with a brushed-nickel finish.

The upstairs master bathroom was renovated too, and in the process was strongly influenced by the nearby coastline. “The first thing you see is the clawfoot tub, which sits on a gray driftwood-colored floor,” says Decoteau. The bathroom’s Kohler Devonshire white pedestal sink has a slight curve, reminiscent of an ocean wave, and the walk-in shower has a natural travertine tile. Like the kitchen, all of the fixtures are finished in brushed nickel.

Evans wanted a redesign that would result in a kitchen and bath with room to relax. The added bonus has been having space for others. With a large family, she’s able to host get-togethers. “So far, we’ve had Thanksgiving dinner and Fourth of July here,” she says. “The space is very nice when everyone’s here. The openness makes it feel so easy.”