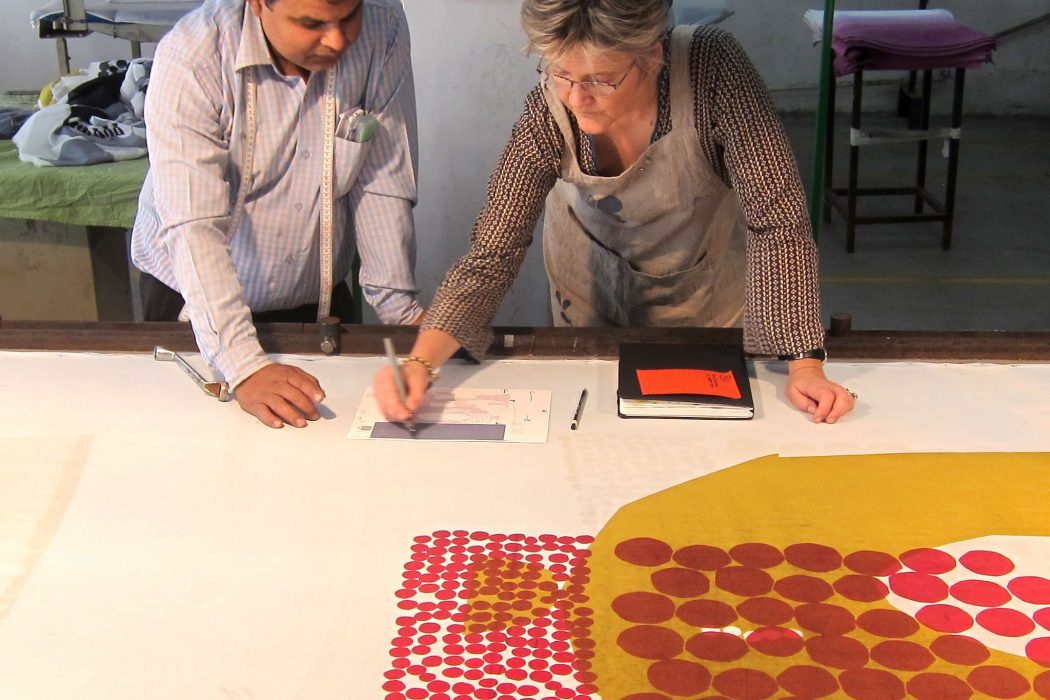 On a chilly, windy winter day, Keith Waters is in the garage of his South Boston home. He’s finishing up a tray table base, an essential piece to one of the products sold by PilgrimWaters, a furniture and textile company he and his wife Susy Pilgrim Waters began six years ago. Together, they produce scarves, throws, tea towels, dresses, bags and tray tables.

Except for the larger textiles, which are produced in India and Nepal, everything by PilgrimWaters is made by hand out of their home. Downstairs, Keith is exacting as he mills planks of maple for the trays and creates wooden joineries for a simple but solid structure. Upstairs, Susy works out new designs. Starting with a pencil in hand, her technique is fluid and her style is organic, which translates beautifully on to the products. “It’s a minimal, quiet aesthetic, even though my illustration work was ridiculously complicated,” says Susy.

Before Susy and Keith worked side by side creating textiles and furniture, Susy was an illustrator and ran her business, which she called PilgrimWaters, for two decades. When the couple started collaborating, they decided to bring the textile-and-furniture products under the same name, essentially adding another division (and employee) to the PilgrimWaters brand.

Susy has also worked for large companies, such as Iggy’s Bread and Crate and Barrel. Keith’s career in computer graphics took them from their native England to Palo Alto, California, next to Texas, and finally up to Boston, where the couple raised their two children. Six years ago, they downsized, shedded the unnecessary and moved into their bright and airy South Boston space.

When Susy discovered a vintage bread tray at the Brimfield Antique Show, she brought it home and had the urge to paint it. Years later, the idea lingered on. “I kept testing ideas on it, painting and repainting,” she says. Even more time passed and Keith eventually became involved in woodwork. “It wasn’t that we said we’re going to do trays and we just built it out, it was a slow evolution,” says Keith.

Good things come to those who wait. PilgrimWaters’ products are now available at stores across the country. The husband-and-wife team continue to build their brand one sketch and one tray at a time.