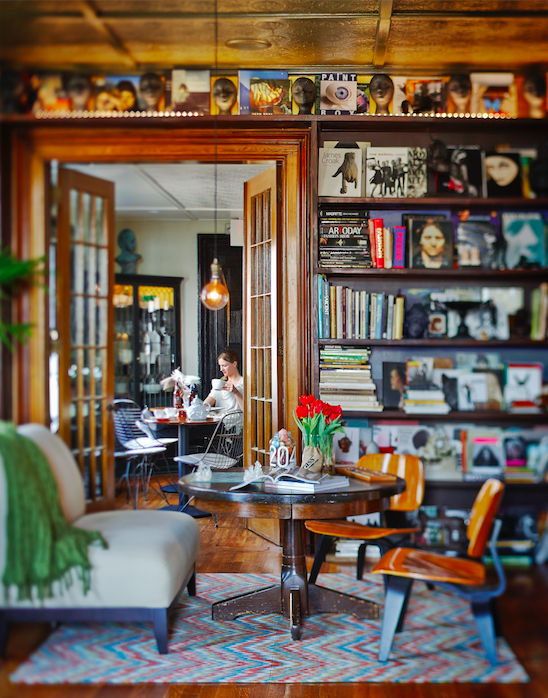 Last year, the Danish concept of hygge swept through American media, and unlike many inscrutable fads, the appeal of this cozy concept was easy to grasp. Hygge (pronounced hoo-gah) refers to the feeling of being swaddled in sweaters and seated next to a roaring fire while inclement weather paws at the windows. The unwieldy word and its celebration of homey comforts may be an import from Denmark, but the idea is a natural fit for New Englanders. We’ve been lighting fires and steeping tea for eons, too. In fact, some of our most visited summer towns just so happen to moonlight in the “off-season” as hygge hot spots, offering travelers the chance to curl up, chill out and luxuriate in the beauty of winter.

Located at the mouth of the Mystic River, this small New England town dates back to the pre-Colonial era when Pequots controlled the river and thus the trade routes. Naturally, much has changed in the last 400 years, but history comes alive at Mystic Seaport (75 Greenmanville Avenue, mysticseaport.org), America’s largest maritime museum where the 19-acre grounds include a re-created New England coastal village, a working shipyard, formal exhibit halls and state-of-the-art artifact storage facilities. After exploring the seaport and its 500 historic watercraft,  you can spend an evening enveloped in vintage American luxury at the Whaler’s Inn (20 East Main Street, whalersinnmystic.com). The inn has rooms, such as the 1865 House—built by local shipbuilder George Mallory and the equally well-appointed Hoxie House. While you’re strolling downtown, be sure to stop in at Bank Square Books (53 West Main Street, banksquarebooks.com), independently owned for over 25 years. Take your newly purchased novels to Alice in the Village (27 Coogan Boulevard, aliceinthevillage.net), a cheerful Lewis Carroll-themed teahouse that boasts over 80 kinds of tea. If you’re looking to venture farther afield, be sure to stop in at the Florence Griswold Museum in Old Lyme (96 Lyme Street, Old Lyme, florencegriswoldmuseum.org), where you can feast your eyes on lush botanical paintings or see what’s on the docket at the La Grua Center in Stonington (32 Water Street, Stonington, lagruacenter.org). The contemporary arts space frequently hosts gallery shows, dance classes and other cultural events. Looking to bring something home? Adore (26 W Main Street, 860-980-3908), a new home decor shop opening in October, has accessories from around the world and will add a story to any room.

Once the playground for New York’s yachting elite, the harbor town today is far more accessible to the average, overland traveler. Remnants of its aristocratic history remain, particularly along Bellevue Avenue, where elegant mansions preside over the wide street with Gilded Age solemnity. Several of these storied estates have been turned into luxury hotels—including Castle Hill Inn (590 Ocean Avenue, castlehillinn.com) and the Vanderbilt Grace Hotel (41 Mary Street, gracehotels.com)—which means that you, too, can sleep the uninterrupted slumber of a 19th-century shipping tycoon, should you so desire. For something a little more casual, stop in at The Pearl (1 Bannister’s Wharf, blackpearlnewport.com), an old-fashioned tavern that serves clam chowder and escargots on gleaming hardwood tables, or try the lobster mac ‘n’ cheese while warming up by the fireplace at the White Horse Tavern (26 Marlborough Street, whitehorsenewport.com). Spend a few relaxing hours browsing the National Museum of American Illustration (492 Bellevue Avenue, americanillustration.org) before winding down with a four-course French meal at Bouchard (505 Thames Street, bouchardnewport.com).

While most know this small island located a 30-mile ferry ride from Cape Cod as a summer locale, the quiet that comes with the cool weather is a welcome respite for visitors and residents alike. The Sconset Bluff Walk is perhaps most lovely in the early fall, when the maples along this footpath turn a brilliant yellow, which complements the subtle grace of the weathered-shingle cottages. Another great thing about the off-season is that normally booked-up hotels, such as the Nantucket Hotel & Resort (77 Easton Street, thenantuckethotel.com), have a few more open rooms. But no matter where you’re staying, be sure to make time to visit the Starlight Theater and Café (1 North Union Street,, starlightack.com), where you can enjoy dinner and a show. Other excellent eateries include The Proprietors Bar and Table (9 India Street, proprietorsnantucket.com), which is ideal for a leisurely Sunday brunch (but closed January through March), and Dune (20 Broad Street, dunenantucket.com), a chic spot perfect for a girls’ weekend. (Check Dune’s schedule as the restaurant may be closing in November for a few weeks.) If you’re traveling with kids, take them to the Nantucket Whaling Museum (13 Broad Street, nha.org) and to the Maria Mitchell Observatory (4 Vestal Street, mariamitchell.com), where they can learn about both the heavens and our history—the domed structure is named for Maria Mitchell, the first professional American woman astronomer.

Tucked away in the rolling green hills of western Massachusetts, you’ll find this funky little college town. Unlike seaside villages, where businesses often shutter their doors for the winter, Northampton seems to come alive in the fall as students and professors gear up for another academic year. Revel in the back-to-school spirit by spending a few hours at the Smith College Museum of Art (20 Elm Street, smith.edu/artmuseum) soaking in their new exhibit on surrealist painter Honoré Sharrer (on view starting September 29). If the weather is nice, plan extra time for a stroll in the Smith College Botanic Garden. Before heading to your rustic-modern digs at the Elm Street Inn (153 Elm Street, theelmstreetinn.com), stop at the Tunnel Bar (125 Pleasant Street, thetunnelbar.com) to consume some sweet libations in a former underground train tunnel that has been converted into a popular cocktail spot. The next morning, tuck into brunch at the Wiggins Tavern (36 King Street, hotelnorthampton.com) before taking a fall foliage hike at the J.A. Skinner State Park.

The spirit of the ’60s is alive and well in Burlington, and first-time visitors to the city are often surprised by its free-spirited vibe as well as its bustling urban center. Stay in the middle of it all at Made INN Vermont (204 South Willard Street, madeinnvermont.com), an urban-chic bed and breakfast that describes itself as being equal parts “Downton Abbey” and “Uptown Funk.” After enjoying the homemade breakfast at Made INN Vermont, head over to Muddy Waters (184 Main Street, 802-658-0466) for an extra cup of java. Depending on your mood, plan to either spend the day shopping along Church Street, dipping in and out of the unique boutiques, or learning how your brews get made at the Magic Hat headquarters (5 Bartlett Bay Road, South Burlington, magichat.net). Check online ahead of time to find out if Magic Hat has a circus show coming up or an art gallery opening—this big-name indie brewery does a lot more than just make beer. As the winter wanes into spring, the Green Mountain Audubon Center and Sugarhouse (255 Sherman Hollow Road, Huntington, vt.audubon.org) comes alive with the sweet scent of boiling tree sap. Other must-visit destinations include the curiously named Light Club Lamp Shop (12 North Winooski Avenue, radiobean.com/light-club-info), which is actually a cool bar, the Echo Leahy Science Center (1 College Street, echovermont.org), and Waterfront Park along the Lake Champlain shoreline.

In Maine, there’s a saying that summer is for the tourists, fall is for the locals, and this is particularly true of newly trendy Portland. Don your scarf and down vest to explore the cobblestone streets of the Old Port stopping in at Bard (185 Middle Street, bardcoffee.com) for a strong cup of locally roasted coffee before tasting the goods at Stonewall Kitchen (182 Middle Street, stonewallkitchen.com) across the street. Amble down to the west end, stopping at the Portland Flea For All (585 Congress Street,  portlandfleaforall.com) on the way, where you’ll find mid-century modern and bohemian home furnishings, sourced from yard sales and flea markets and curated to a T. Grab a good book at either Longfellow Books (1 Monument Way,  longfellowbooks.com) or Print Bookshop (273 Congress Street, printbookstore.com), two excellent independent shops with strong local selections, before checking into the Mercury Inn (273 State Street, mercuryinn.com). While the inn is known for its commitment to local food, there are ample places in town to eat, so save room for sampling multiple locations. Vinland (593 Congress Street, vinland.me), the world’s first 100-percent local restaurant (all food is sourced from Maine, although the wine list does feature imports) makes a strong case for eating food grown close to home, as does Street & Co. (33 Wharf Street, streetandcompany.net), a cozy, unassuming restaurant where  local seafood shines. (Arrive early to get a seat by the fireplace.) For brunch, few places can beat the German comfort food served at Schulte and Herr (394 Cumberland Avenue, schulteundherr.wordpress.com)—it’s a BYOB restaurant that simply oozes hygge.