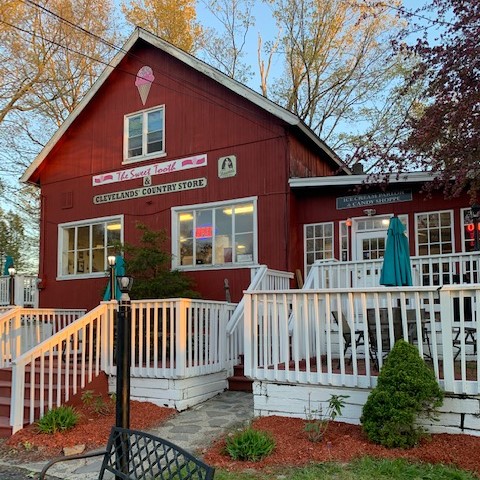 Fall has always been an optimum time to savor the pleasures of a New England country store. Tasting local apple cider, nibbling spicy pumpkin muffins or sipping freshly ground hot coffee within a cozy vintage building is our idea of autumn heaven. Even with Covid-19 regulations in place, general stores across New England are still serving up warm welcomes this year. To celebrate the quintessential joys of county stores, we will feature one historic general store from each NE state, over the next six weeks:

The more than two hundred and twenty year old barn at the corner of Main and Maple in Plymouth CT, has had two iterations as a general store. Now known as Clevelands’ Country Store, the building previously housed an antiques and general store (of the same name but with a slightly different spelling) which opened shortly after World War II and eventually closed in 1990. New owner John Casanova began with an ice cream shop called The Sweet Tooth in the early 2000s and then launched the re-imagined general store side in 2016.

Manager Chris Casanova, who is John’s son, says that they like to feature New England-made items, such as Bucks Ice Cream, Hilltop Apiaries Honey, Side Hill Farm jams, and Fox Meadow Farm Pancake mixes. “We also have a great selection of penny candies and exotic jerky, and we have a really good deli that serves a nice sized lunch crowd on a regular basis.”

Working in a centuries old barn has its quirks, such as original horse tie-up posts on the patio, and its mysteries. “We do think it might be haunted” says Casanova. He relates a specific time when was working late with his brother in the store side when they heard children laughing from the ice cream shop. “I went over, but there was no one there. I looked outside and there wasn’t a single car in the lot. Spooky stuff like that does happen on occasion.”

Ghostly sounds notwithstanding, the Casanovas have worked hard to create an atmosphere that is welcoming to all. “We have a lot of families come here, people of all ages. And our growth has given us the opportunity to help out our community in a lot of ways.”  When Covid19 first shut their doors this spring, Clevelands’ began donating lunches to local hospitals and nursing homes, as well as taking orders over the phone for easy curbside pick up for their customers. “We really see this as a reciprocal relationship,” says Casanova. “Our customers have made us a successful business, so we see it as our duty to help out however we can.” 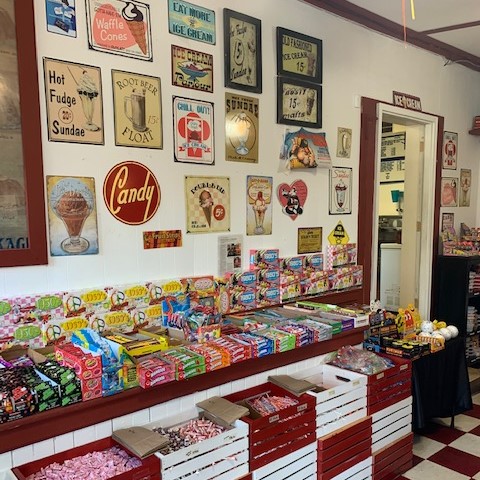 “It was difficult at first to adapt, because it changed the way we sell, and what we sell,” says Casanova. “We were accustomed to ordering lots of jelly beans and suddenly we were selling rolls of toilet paper and eggs at cost.” He took the time to redesign the website to make it easier for people to order online, and the store’s annual gingerbread house-making event may have to be reconfigured, but Casanova sees all of this as an opportunity to grow. “ We developed solutions over time and I think some of them will stay going forward.”  But the overall goal for the store has remained the same. “We still want to be that quaint little place for people to be able to take a step back into time and enjoy. “