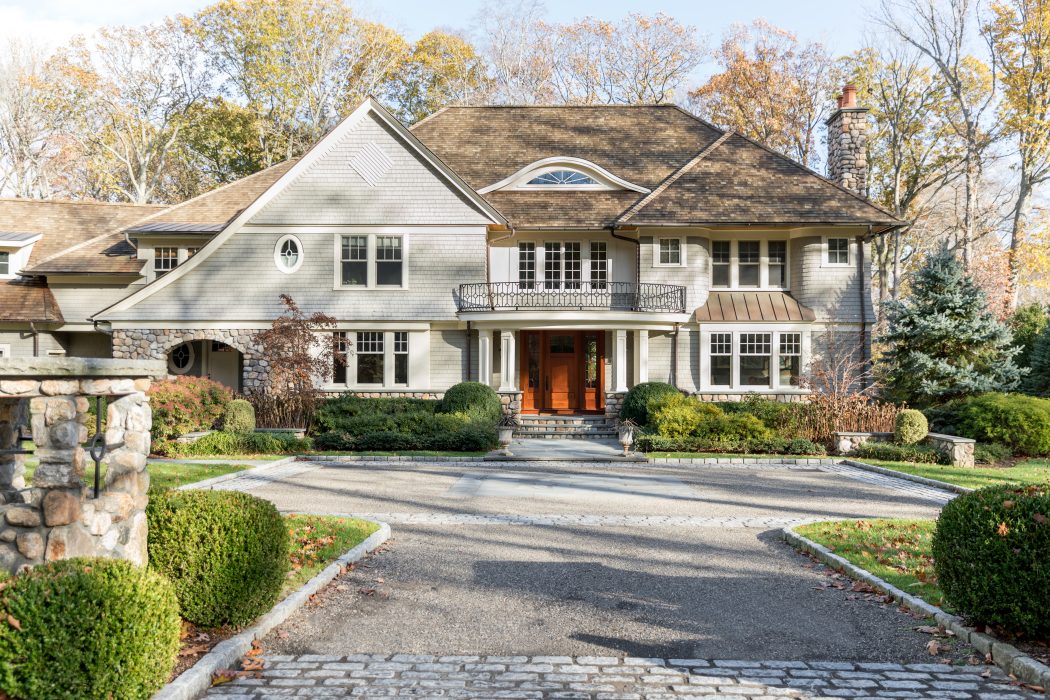 Without leaving their beloved Connecticut neighborhood, a family of five settles into a gracious new custom home.

Every family experiences some growing pains. With their third child settling into her toddler years and their respective out-of-town families visiting frequently, a Connecticut-based couple decided it was time for more space, specifically more bedrooms. Locationwise, they loved their neighborhood in Darien and didn’t want to move far. Stylewise, they were after something more unique and customized than the area’s ubiquitous Colonial.

In search of options, they were immediately drawn to New England’s iconic Shingle Style after seeing a local example built by New Canaan-based Karp Associates. Wanting something similar, the couple hired Karp and discovered a tear-down situation on a one-acre lot in their own neighborhood. “When we first decided to move, the kids were three, five and seven,” recalls the wife. “Karp found the buildable property just half a mile away, and we loved it. It was still in our direct neighborhood and we could keep the kids in the same schools.”

During the design phase, the couple knew their time would be limited and gave architect Sabrina Weisberger Foulke, principal of Point One Architects in Old Lyme, a lot of leeway. “We didn’t want the same house that everyone else was building,” shares the wife. “We liked Sabrina’s style and personality, and she came back with a lot of great ideas.” Ultimately, the house ended up being very different from the one that originally inspired us.”

At nearly 8,000 square feet, with a full basement, a finished third floor and a garage, the resulting structure is generously sized but adeptly scaled to the property and surrounding homes. Cedar shingle siding and roof together with stone veneer communicate the Shingle Style’s earthy elegance, while copper roofing, casement windows and a central eyebrow dormer strategically break up its shingled expanses.

Continually dosing the home with new-old character, Foulke created a welcoming porch for the front entry, demarcated the side entrance with a stone arch, and arranged quirky, unaligned dormers by the garage. “They add a little playfulness,” muses the architect. “As opposed to very formal Shingle Style, this home is a little more casual and reminiscent of northern New England versions,” she describes.

Knowing that her clients love traveling, are active outdoors and crave a constant connection to their natural surroundings, Foulke worked with her local Marvin representative to maximize the home’s glazing. In the two-story family room, topped by a barrel vault ceiling, four six-foot-tall Marvin picture windows with additional two-foot transoms flank the stone fireplace. “This is where we spend a lot of our time,” asserts the wife. “The big windows let in lots of light and connect us with the outdoors—we love seeing outside, especially when it’s not ideal to actually be outside.”

Other tricks that Foulke employed to better frame the landscape involved setting the window head height at eight feet, allowing for extra tall windows. For the first and second floors, she chose cottage-style double-hung Marvins: the upper sashes are smaller with simulated divided lights and the lower sashes are larger and muntin-free, resulting in clearer sightlines.

Adding yet another layer of architectural detail, Foulke conceived a reoccurring motif: a “T” with a central circle. It appears in the front entry porch’s balustrade, in the entry court’s pillars and stonework and even in certain windows, including the oval Marvin casements dotting the home’s envelope. The motif lends gravitas to the master bathroom’s bay windows, creating an eye-catching effect that is still serene enough for such a relaxing space.

Windows were so important to the homeowners that they even requested one in their shower, in an effort to recreate the feel of an outdoor shower inside. To prevent rot, a mahogany window by Marvin was installed using marine sealants—and it’s still in perfect condition, notes the wife.

Another bay window arrangement brings light into the husband’s first-floor study. Paneled in mahogany, it’s a cozy retreat for work but also for guitar playing, and the window seat is a favorite homework spot.

Of particular importance to the owners was a welcoming front entry, which begins with a cobblestone-lined courtyard and covered porch outside and continues with a paneled foyer inside. Off the foyer are a formal living room and dining room, both of which are introduced via extra-thick paneled openings. “The formality of the millwork fits in with the Darien neighborhood but we wanted to do a more updated take on tradition by keeping it more clean-lined and contemporary,” explains Foulke.

As a busy mother of three, the homeowner considers the mudroom off the garage a lifesaver, with its cubbies for the kids’ stuff and even a bed for their golden retriever. Another help is the kitchen’s built-in desk: “It’s my domain; I can work there while still being connected to what’s going on,” she says. The kitchen, light and bright, with white cabinets and marble countertops, is a hub of activity. “The kitchen and great room are where everyone hangs out,” the mom admits.

From the beginning, Foulke’s design was about achieving highly personalized spaces to facilitate her clients’ lifestyle. “What I love most about this project is that it’s lived-in,” reveals the architect. “There are personal items everywhere—like the five-thumbprint painting in the dining room. At every turn you realize it’s a family home.”