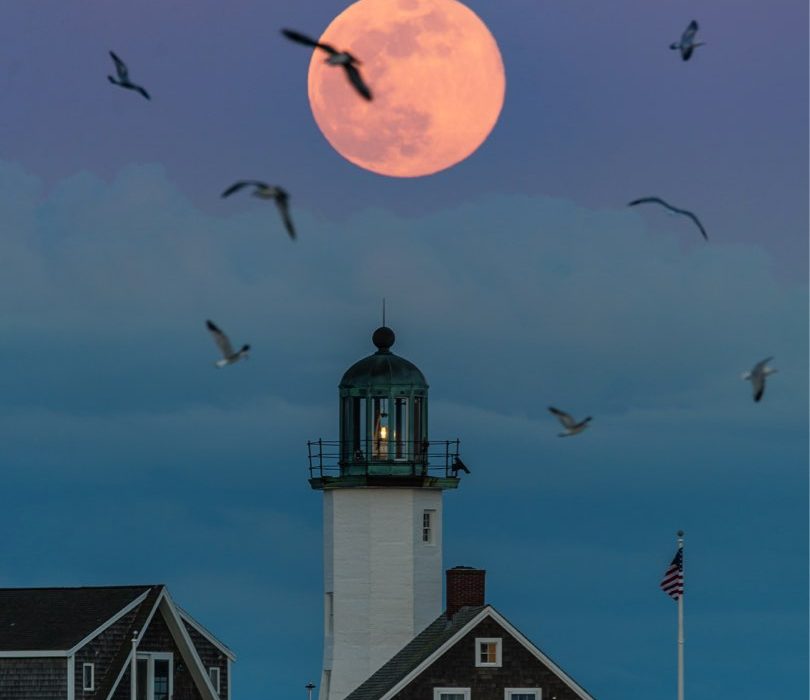 Kjeld Mahoney is a photographer based in Scituate, Massachusetts. His studio is located at 146 Front Street in the seaside town’s scenic harbor. His recent photograph of the moon rising behind historic Scituate Lighthouse is striking and we had to learn more.

When did you decide to pursue photography as a career?
In 2000, when I got laid off in the summer during the Dotcom crash. I wanted to be responsible for my own success.

What are your favorite subjects to photograph?
Whales, dories and lighthouses. Killer whales, too, but they haven’t visited the South Shore yet!

How would you describe your style?
My style is all over the board. I love calm and peaceful scenes and I also like chasing storms. Also, if I can find humor in the scene, I’ll try my best to capture it.

Your photograph of Scituate Light is breathtaking. Can you tell us a little bit about that shot?
I love going out when the moon is rising as the sun is setting. I have a few apps that calculate the exact angle of the moonrise and on that night I was in the right spot with no one else around. I saw some other people with cameras way over on the other side of the beach waiting for the moon, and some of them came close to where I was after it rose, but it’s nice being prepared and not just jumping out of your car to get some quick pictures. I like to stay at a scene and see how the light changes and what could happen. I was ready to shoot when that flock of seagulls decided to fly in front of the moon and the lighthouse and I kept shooting.

You’re based in Scituate, do you find yourself photographing the town a lot?
Yes always! My website is named photosofscituate.com! I have many other locations on there, but right now it’s 75 percent of Scituate.

As an artist, has it been important to you to be based in a place with so much natural beauty?
Yes! I went to Roger Williams College to study art because the campus setting is beautiful and right on the water. I need to be near the ocean. It clears my head and pushes my creativity.

What keeps your career fun and interesting?
Traveling and trying new things. I’m always trying to shoot what others aren’t or photographing the popular spots from different angles. By not copying others you are left with doing what your own creativity drives you to photograph. I also try to create frames and mountings for my photos that are unique and one of a kind. Also, finding new artists to display in our gallery has been very rewarding.