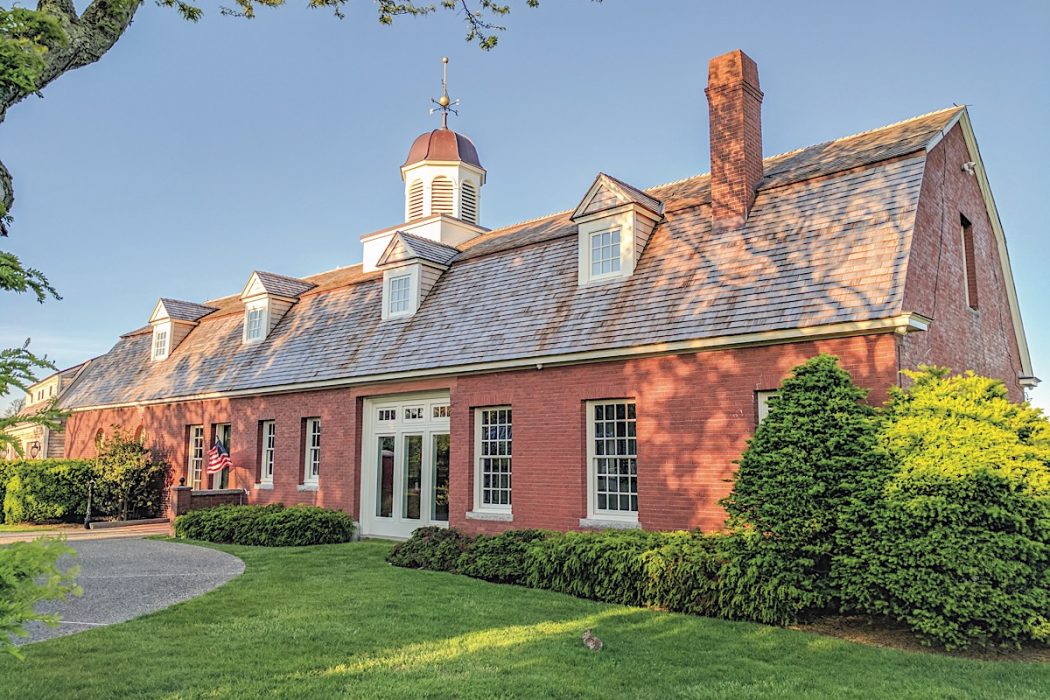 For three decades, when homeowner Dan thought about living in New England, he kept coming back to a quiet cul-de-sac by a tranquil pond in Falmouth, Massachusetts. A drive down the road explains his fascination: On a calm summer day, the salty breeze off the Cape Cod Bay rustles the surrounding reeds. There’s a view of the ocean beyond and its many boats, but by the small pool of water, it’s a private paradise. The latter is nearly impossible to come by on the Cape, so when a home on the street came on the market, Dan, was ready to pull the trigger.

“I’ve wanted to live on [that street] for the last 30 years,” Dan tells New England Living TV host Parker Kelley. “This is my favorite street in all of Falmouth.”

The property that was for sale was adjacent to the pond, but it had also been abandoned for five years. The structure was brick, sturdy and historic; it was originally built in 1890s as a carriage house. Dan’s wife, Lori, loved the area too, but saw the project ahead as daunting, especially since the couple lives in Singapore year-round with their family.

Dan is a software executive and Lori is a charity director. In Singapore, they wake up on the seventeenth floor of a skyscraper in a busy city. The house on the coast came with the breeze and the beaches, and they longed to show their three children their New England roots. When their two daughters, Brooke and Alexandra, fell in love with the site that sealed the deal.

“My two daughters said if you buy this house, we will commit to have our wedding in the backyard,” Dan tells Parker. That promise was enough for Dan and Lori to move forward with the purchase. “My wife looked at me and she said that’s the home we want to build. Let’s do it.”

Lori could overlook the long road of renovations ahead for the reward. “To me, it’s all about the family and if my kids are coming back and they want to come home, then I’m sold,” she says.

Dan and Lori worked with Mark Bogosian of Longfellow Design Build on the Cape, who with his local team designed around the challenges of an old home. “Working with a house with such history and that brick structure, there were limits but the designers worked hard to create an open concept that they love,” says Mark.

Dan’s father also helped out with the renovations. A retired builder his son convinced him to get back into the business for one final project. ““The best part of this project is I got to spend one year on it with my dad and hopefully we are going to be proud of it forever,” says Dan.

Inside the house is a balance of red brick, white, and wood. Dan and Lori also held on to many historic details. Since the building was originally a carriage house, it had stables for the horses. A white pole in the living room marks the former location of the stalls. A nineteenth century drain has been sealed up and is stamped into the brick floor.

Dan told Mark and the team at Longfellow that he wanted to be able to see the ocean when he walked into his Falmouth home. Traveling from a city across the world, Mark understood why. The open concept allows for a view of the blue water beyond when they open the door. At the top of the home a cupola, which was based on the original design, lights up at night, and has become a land marker for mariners. “Boaters have told me they look for this if they miss the harbor,” laughs Dan.

The house has guided more than sailors on the bay home. Their kids now feel connected to the region. “We grew up overseas, but [our parents] always wanted us to have New England in the back of our minds and [in our] hearts, so they decided that we really needed a place on the Cape,” says Alexandra. “When people [ask] where are you from? We say the Cape…because we feel the Cape has a special place in our hearts, but also for our entire family.”

Mission accomplished for this Falmouth family.

This Falmouth home was featured first on New England Living TV in Episode 1 of Season 2.