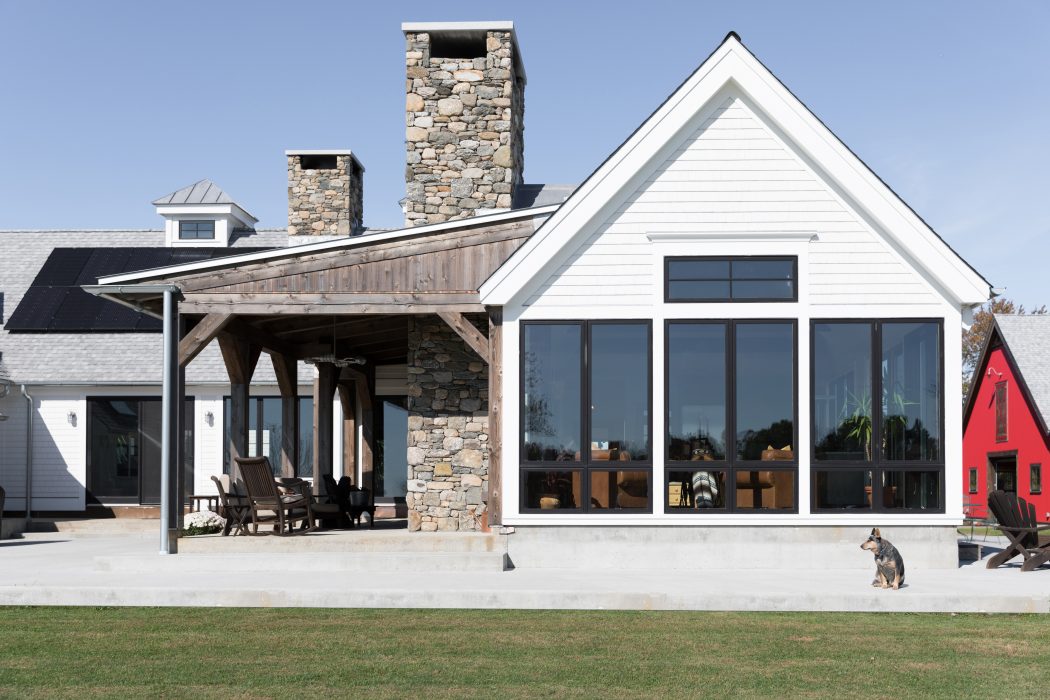 Mark Olson and his wife, Gail, shared a vision for the house and equestrian barn that now occupy the land they purchased in Newtown, Connecticut. With 33 years as a builder under his belt, the owner of Olson Development, L.L.C. had more than a few ideas in mind when it came to designing his own home. Net-zero single-floor living and accommodations for their four competition horses were top of mind. “As a builder, I’d always wanted to have a blank slate. And, at 60, this is going to be our final home, so I wanted to build new and incorporate what my wife and I have learned to like,” says Olson, noting that after purchasing the property, they spent six months getting a feel for the way the sun and other weather-related elements affect the site. “It was extremely important to place the house and barn perfectly.”

Having searched for a place for years, the couple finally settled on a 10-acre hayfield, desirable for its flat topography and solar opportunities. The land dictated Olson’s entire design, which features a U-shape cluster of three buildings: a 4,800-square-foot house—4,000 feet on the ground level, and 800 comprising the second-floor guest suite—a horse barn, and an equipment barn. There is also a 120-by-210-foot arena with specialized footing for reining, an equine sport known for its fast spins and dramatic sliding stops.

Ultra-white cedar shake siding on the house draws from the regional vernacular, while black-trimmed casement window/awning combinations are a nod to traditional black shutters. Together they create what Olson terms “a modern farmhouse.” He used fieldstone from old property line walls for the chimneys and front entry, as well as reclaimed chestnut beams from a barn on an adjoining property, once part of the same parcel.

An exterior courtyard faces due south to maximize solar gain. On the centermost roofline, Olson located a 14-kilowatt solar array that powers the entire house and barn year-round. “From a sustainability standpoint,” says Olson, “we are not using fossil fuels to live here. That’s made possible by advances in technology that create a tight thermal envelope, which in our case, includes the low U-factor of the Marvin windows—nothing is close in value to Marvin windows.”

The interior spaces are divided into three separate living areas: the “work zone,” which houses the kitchen and family room, the great room, and the master suite. The kitchen is special for its cathedral ceiling and 200-year-old chestnut beams, which were radio frequency kiln dried—a little-known process used to dry large timbers through to the core; it prevents the shrinking and checking that occur when big pieces are not completely dry.

The baker’s pantry, as the Olsons call it, serves as a second kitchen. “The pantry was a home run,” says Olson, who incorporated a Marvin window that slides like a pocket door to connect the pantry and kitchen, creating a space that can be used as bar seating and a pass-through. Of note, too, is the custom island Olson designed using the reclaimed timber, which is also featured around the gas range. “My idea was to have the range bump forward with what appear to be legs, like a piece of furniture, to support the cooking top,” he explains.

At the center of the layout is the lofty great room. “The goal was open-concept to the extreme—with large-scale rooms and high ceilings,” says Olson, noting the massive chimney measuring 7-by-9 feet with a double-sided fireplace, which accommodates the dining room and the living room, and provides a visual separation between the two. Marvin sliders frame courtyard views and structural collar beams—also radio frequency kiln dried—were stained dark to appear antique.

Red metal vertical siding on the barn is a salute to New England’s ubiquitous red barns. “I wanted to have a statement on one of the buildings,” Olson notes. “Red was a must for the barn but I used a vertical metal to give it a modern feel.” Interestingly, Olson treated the cedar siding on the barn dormers and doors, as well as some of the dormers on the house, with ferrous sulfate, a type of iron that when painted on wood instantly lends it a gray-patina antique look. Above the barn, a 1,000-square-foot space stands ready for an Olson Development, L.L.C. office. Grand windows overlook the horse arena and grant views of the surrounding hillsides.

Perhaps the most important aspect of the overall design is the multitude of views from every room. “That was a real driving point—to utilize Marvin windows to look all the way through the house. There are 15 to 20 views from many different angles,” says Olson, whose new home is a clear testament to his talent.